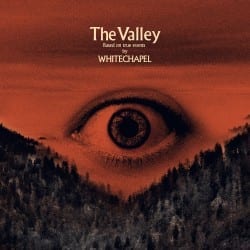 THE VALLEY is a brave and powerful evolution for WHITECHAPEL. THE VALLEY expands upon their musical foundations and pushes boundaries while still remaining true to their roots. A truly honest, mature and trailblazing album.

The 29th of March explodes. A fiery, spikey grenade filled with sharks gnarling their teeth will detonate on the music scene. WHITECHAPEL drop their seventh full-length album to a swathe of salivating, yet nervous fans. Fans hungry for more, having tasted the drip feed of singles since late 2018, as they eagerly await to experience the full ferocity of the upcoming album THE VALLEY. Yet this hunger is laced with uncertainty. Those who call themselves ‘true’ fans have been uneasy since WHITECHAPEL’s previous release, where their first ever clean vocal leads in the track “BRING ME HOME”, left a sour taste in some mouths. In truth, arguing about the appropriateness of this decision is something that the elitist metal community would rather die than come to an agreement on. After listening to the album, one thing I can say for sure is that THE VALLEY will be as divisive as it is an incredible piece of art.

THE VALLEY provides a slick, 10 track offering, exploring dark, sensitive lyrical themes. Overall, there is a distinct progression from their now seemingly historic early death metal origins (2007 if you could believe it). WHITECHAPEL have matured their sound significantly while not totally forgetting their roots. Bringing more clean vocals was always a risk, and after MARK OF THE BLADE(2016) made a lacklustre impression, the general feeling was not one of optimism. Having the time to find his voice, Phil Bozeman really steps up and offers something unique, with a lyrically mature, seasoned and at some points overshadowing vocal presence.

The album is impeccably mixed, the signature complex and down-tuned guitar riffs coming are crystal clear. The riffs are less memorable though, with songs seeming to blend into one another, the catchy hooks from “MARK OF THE BLADE” and “THE SAW IS THE LAW“ are missing from THE VALLEY. This does give plenty of room for Bozeman though, as the album is truly an expression and exploration of his vocal prowess. Guitarist Alex Wade reiterates the band’s support for Bozeman ‘I feel our music is Phil’s release from his past’

The album opens with “WHEN A DEMON DEFILES A WITCH”, a previously released track in the lead up to the album launch. Blast beats smash your face almost instantly, followed  by a thorough demonstration of the upgraded vocal ability…growls going low then high with an incredible pace. Before bringing in an orchestral feeling chorus overlayed with clean vocal. Bozeman’s choice of words and melody are so carefully done, they match so well as you almost lose your inhibitions as he sings ‘I will erase, humanity’ an eerie and chilling reminder of the lyrical darkness coming from the album source material. Definitely one of the heaviest tracks on the album, and a taste of what’s in store.

Next up, “FORGIVENESS IS WEAKNESS”. And true to the title, this song is unforgiving. A high energy circle pit destroying track that the legacy fans come for. With heaviness leagues above MARK OF THE BLADE. The band flex their groove metal muscle with this track with an unmistakably tantalising tempo you can’t help but bang your head to.

“HICKORY CREEK” is an offering which traditional fans would need to adjust their expectations, both instrumentally and vocally. Opening with country-esque guitar harmonics over clean guitar picking. The entire song is reminiscent of mid 2000’s nu-metal ballads (DISTURBED, SLIPKNOT) There’s a little taste of Bozeman’s screams before the expected guitar solo, but very sparsely used, this gives the emotion more impact, but would sincerely disappoint the hardcore fans. “HICKORY CREEK” offers a timely mid-album point for reflection with the lyrics painting complex imagery seasoned with pain and repressed trauma.

Once again returning to the darkness, “BLACK BEAR” offers gravelly bass grooves and intensiveness. Gripping you from the first few seconds, yet it doesn’t seem to deliver the final punch it builds to. This is probably the track most reminiscent of WHITECHAPEL’s last few albums, with quite an OUR ENDLESS WAR(2014) feeling, Bozeman’s rendition of the ‘Six feet deep’ lyric almost slightly too similar as the most memorable phrase. Aside from the similarities, this is one of the most fun songs on the album.

“WE ARE ONE” delivers outstanding percussion prowess, with drums tracked by Navene Koperweis – a credit to both artist and production team. THE VALLEY was mixed by David Castillo, mastered by Ted Jensen and produced by Mark Lewis (CANNIBAL CORPSE, THE BLACK DAHLIA MURDER) you can really feel the care and time that has gone into each moment within the album. The breakdown at the closure of this track is an epic reminder of the fierceness and purposefulness of the WHITECHAPEL experience.

“THE OTHER SIDE” and “LOVELACE” are the bread for an anxiety sandwich, making “THIRD DEPTH” the meaty filling. “THE OTHER SIDE” provides a pummelling and relentless riff fest, just a little shy of that special something extra. “THIRD DEPTH”, potentially the favourite track from THE VALLEY, channels an A PERFECT CIRCLE vibe, combining prog metal complexity and uplifting dynamic sections. Bozeman’s haunting vocals again take centre stage, across the bridge section, his echoing ‘I’m not stable’ lyric raises goosebumps. “LOVELACE” completes the package with spicy guitar and drum synchronisation, and a guttural scream selection with more variation than options for pizza toppings.

Closing the album with “DOOM WOODS”, a slower ballad (the word ‘ballad’ used lightly) transitions through cleaner guitar overlays, to large choruses, chunkier than a cold snickers bar. “DOOM WOODS” merges long drawn out chords and screams, exacerbating feelings of deserved exhaustion, one last gasp before the end. Colossal scream vocals guide this almost 6 minute track to the completion of the album.

‘We have expanded on the sound we created on MARK OF THE BLADE and created a more cohesive work of art overall’ Bozeman hits the nail on the head, THE VALLEY is clearly a thoughtful and carefully constructed work of art.