If you are a fan of Dio then you are about to be in for a very special treat indeed. BMG are about to release some very special remastered versions of Angry Machines, Magica, Killing The Dragon and Master Of The Moon in memory of the tenth anniversary of the passing of Ronnie James Dio.

BMG have made sure that the deluxe editions of these remastered albums have some very special items for true collectors, and to make sure that everything is authentic they have worked with Wendy Dio Ronnie’s widow who was also his manager. We recently chatted to Wendy about what fans can expect from these releases.

“Well the re-releases are coming out through BMG and they haven’t been out for almost ten years,” says Wendy as we begin to talk about the releases. “They have been re-mastered by Wyn Davis who worked with Ronnie on many, many records and there are some very special CDS that go with them that has some live recordings on them. I am so excited about them, and we even some great new artwork to go with them that has been done by Marc Sasso. I am so excited about them because they are great.”

Wendy says she was also very happy with the entire process of when she was working with BMG saying they had the passion that labels all used to have. “They are very passionate about what they do,” she explains. “They were very excited about this… they wanted to do this for the fans. They came here and saw some of the T-Shirts that we have and they just said ‘can we get some? Can we get some?’ They were great, they didn’t feel corporate at all, in fact, they felt like the way record labels used to be in the beginning when everybody was excited and they wanted to do it because it was fun and because they loved music.”

“That was the feeling that I got here,” she goes on to say. “It really felt like they were loving what they were doing and that they wanted to make the best possible product.”

Thanks to Wendy’s dedication to Dio’s work BMG also didn’t have to go very far to find exactly what they needed to make these releases so special. “Everything was here,” says Wendy with a hint of sadness in her voice. “We have everything in a big vault, we have so much stuff. So, we just went through everything that I could find. Then Wyn Davis went through to find what was the best quality because we wanted this to be a good quality product that Ronnie would be proud of.”

Of course, Wendy admits that going back through the material also brings up memories for her as well. “It is kind of bittersweet,” she says after she pauses trying to find the right words to describe how she feels. “It is one thing to find the stuff but then I found myself wishing that was here to listen to all the stuff and to put his stamp on it. I mean his stamp is on it but for me I still feel that he isn’t here. It was like when we won the Grammy for Last In Line by Tenacious D that was the one thing that I wished for everything that Ronnie could have been there to see – that success at the Grammys.”

As our discussion goes on Wendy admits that sometimes as she finds herself going through a lot of the stuff that has been kept she finds things that she believed were long lost. “Yes, that happens all the time,” she says. “Everything s kept in a climate-controlled area and it is all labelled. But I am finding stuff all the time, I’ll suddenly be like ‘oh look there’s that… that is wonderful.’ Then, of course, there were also a lot of unfinished songs that perhaps in the future we could look at a way to put them out, but it would have to be perfect and it would have to be the way that Ronnie would have wanted it. I don’t want to just flood the market with any old crap, I am very particular about what we find and then I get somebody with professional ears, like Wyn Davis, to listen to it and make sure that it is fine before I ever put anything out.”

As we finish up the interview Wendy tells me that Ronnie also had a soft spot for Dio’s Australian fans. “He just loved the Australian people,” she says. “His favourite places to play were the United Kingdom and Australia because he said he had great fans there. Of course, there were critics but they were always fair, and Ronnie would always listen to the fans. It was a pity that Australia was so far away because he would have loved to have toured there more often.”

BMG has made four tracks available for streaming:

Also check out the previously released reissue tracks at:

The remastered Dio collection will be released by BMG on the 20th March. 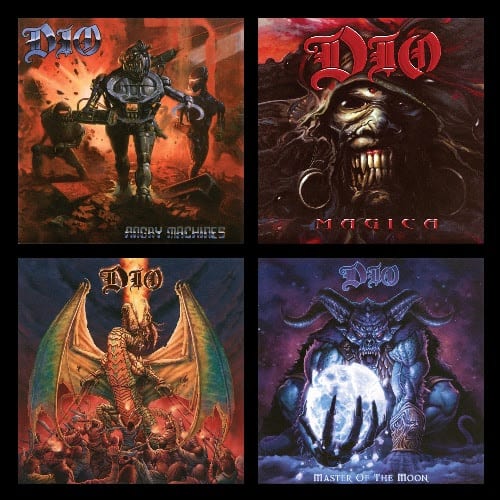