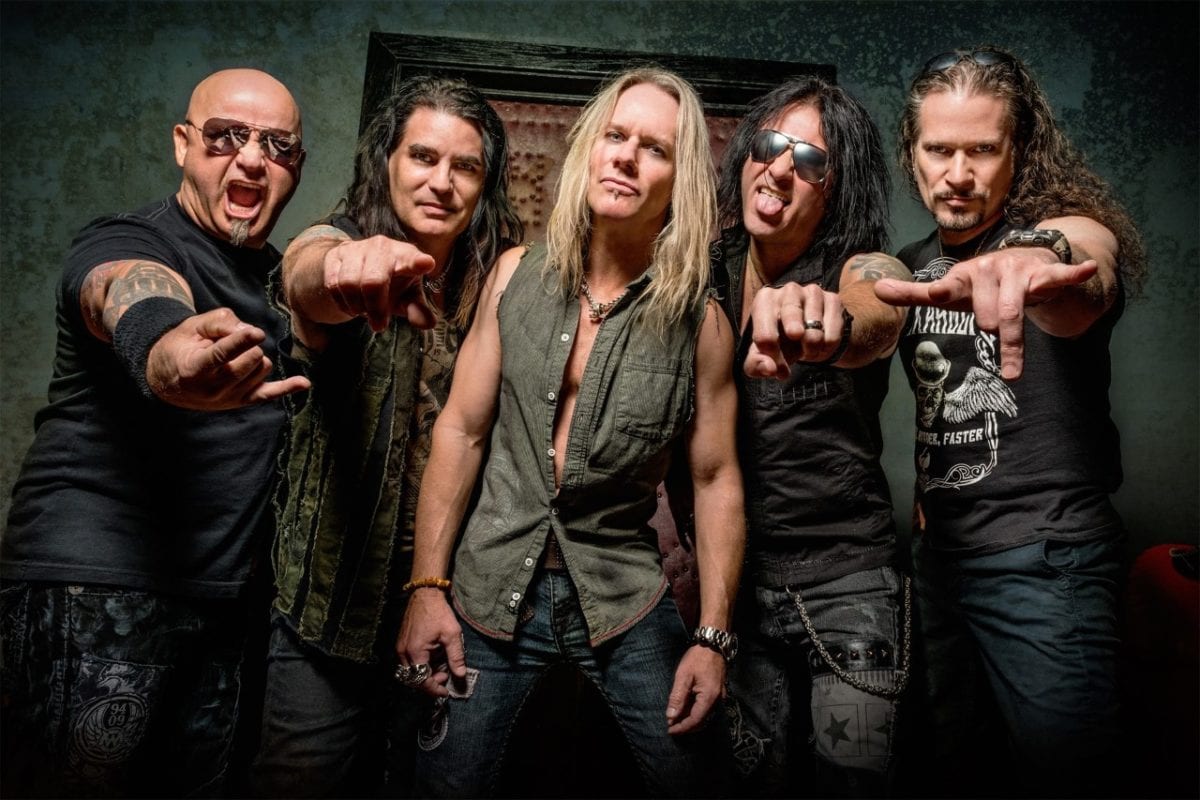 “It’s a whole new world,” Warrant guitarist, Erik Turner pointed out. “It’s not like the heydey when you sold 250,000 copies in the first week. Mostly people listen on streaming music – not a whole lot of people buy CDs still – but the reception has been great! So far, so good.”

Turner is referring to Warrant’s ninth studio album and their second with vocalist, Robert Mason, Louder Harder Faster, which was released last month. It is an album which has been six years in the making and worth every moment of it.

“New songs and music don’t come easy to us,” Turner explained. “We’re not spitting out songs all the time. Jerry Dixon and Robert wrote this record for the most part. I co-wrote one song, and another friend of Robert’s co-wrote a song, but it’s really just Jerry and Robert. We’re all contributing riffs and song ideas but at the ned of the day you’ve gotta be inspired to write music and we’ve been real busy touring and with families. I guess about maybe a year ago, Frontiers had a second option with the band for another record, and for about two and a half years, every six months or so, they were like, ‘Are you ready to do a new record?’ so we finally decided as a band let’s just block out six weeks and just do it. That’s when the machine started rolling, and we got to work and started demoing songs and recording songs and all that good stuff.”

The title of the album serves not only as a great launching pad for a new record but also makes a statement that Warrant are back and better than ever.” Robert worded it out two or three years ago on stage, and I liked it, and he started to write a song called “Louder Harder Faster” maybe a year later,” Turner recalled. “I heard some bits of it on his phone and thought, ‘Wow, that’s cool to put on a T-shirt.’ So two years ago before the record even came out, we were doing shirts that said Louder Harder Faster, and we thought, we’d better make a record (laughs). Long story short, when it came time to pick a title for the record, we were looking at different songs on the record as a whole and we all thought and agreed on that. Louder, Harder, Faster… who doesn’t want that?”

Entering the music industry in the late 1980’s, Warrant came into the world as a glam rock style band, unashamedly riding the wave of euphoria that was sweeping the globe. As one of the founding members, Turner says back then, even though the band had toiled since earlier in the decade, they still weren’t quite prepared for the adulation that followed. “When you are nineteen years old and moving to L.A., I wanted to get in a rock band, and hopefully that band would be something like Aerosmith or AC/DC and people that inspired me to want to be in a band,” he recounted. “Not musically like them, but just to have success; to make a living and to be a rock star. To be quite candid, I didn’t move to L.A. to get a day job or work in a dog room grooming shop – which I did for about three years. I went there with a goal in mind of putting a band together, getting a record deal, hopefully having enough success so I could do it for a living, and I guess that happened. Here it is thirty years later, and I’m still playing fifty plus shows a year and making records, and I get to do music all the time. So in that sense, it worked out. But, of course, there were a lot of ups and downs for the band over the years, but that’s just life. Everybody has their ups and downs; ours is just more… you’ve got five guys in a band, there’s a lot of moving parts and a lot of personalities and stuff to go wrong (laughs).”

With the release of their debut album Dirty Rotten Filthy Stinking Rich in 1989, Warrant made an emphatic statement of intent not only with the album title, but with the music contained therein, and Turner admits that from the very beginning the band knew they were onto something special.”

“My goal when we got the record deal was, man, I hope we sell enough records that the label will let us make a second one,” he laughed. “That was me. If it went gold or something, that would have been great. Then you’ve got Jerry walking around the studio saying: ‘Are you guys ready to be rich?’ So we all had different thoughts in our minds. Worldwide, that record sold over three million copies, and we were on our way. We played 262 shows in support of D.R.F.S.R all over the world, and the tour lasted sixteen months, so things went way beyond what I had ever hoped for. ‘Down Boys’ was a huge hit on MTV and it did really well on radio. And, of course, ‘Heaven’ was a big hit and ‘Sometimes She Cries’ did really well, so what more could you ask for with a first record?”

Coming into the musical climate in the midst of the glam era, Turner says Warrant was unashamedly a glam metal band, and as such, rode the coattails of the movement until its demise in the ’90s.

“We were the last guys to catch the ’80s wave,” he agreed. “Our record came out in 1989. Our first album and Skid Row’s first album came out on the same day, so I guess we were the last two bands to do really well out of the ’80s. So many bands did unbelievably great out of it, but I feel like we were still a big part of it because we were a Sunset Strip band in Hollywood from 1983 to 1989, and we killed it on the Strip. We lived the local legend rock star as much as you could for an unsigned band.”

The release of Cherry Pie the following year consolidated the grip Warrant had on the scene, with the title song, in particular, sweeping them to the top of the charts worldwide. The song itself was a little more accessible musically than anything the band had released to date and ushered in a new legion of fans that jumped on the Warrant waggon. It heralded a shift in direction that was to continue through to following albums and served them well until the glam bubble burst in the early 1990’s.

“Jani [Lane, vocals] wrote the first three records, and he did change his style on Dog Eat Dog, which followed Cherry Pie,” Turner noted. “We went from being this party band from hell (all about having a good time) to then when he started exploring more darker lyric content on Dog Eat Dog for whatever reason, but we were all on board 100%. We were really proud of that album. It had a pretty big cult following and went gold and did okay, but obviously, with grunge coming in when it came out, we had had multi-platinum albums back-to-back and to have gold was a disappointment. But looking back now, given the musical climate and everything going on – plus we didn’t tour in support of the record hardly at all – you can understand. I think we did 35 shows for Dog Eat Dog, then Jani Lane quit the band during the middle of the tour, and that was the death nail for that record, but to have D.R.F.S.R and then Cherry Pie… ‘Cherry Pie’ is a great song. Whether you like it or not, the fact that is that it has stood the test of time. That song gets played in so many places because it is an iconic song for that era.”

It is a known fact that the Cherry Pie album was initially supposed to be called Uncle Tom’s Cabin until the label intervened, but Turner reveals that wasn’t actually the frontrunner for the name.”

“We had a couple of titles we were throwing around,” he laughed. “One was Uncle Tom’s Cabin and another one was called Vertical Smiles, that’s really what it probably would have been called. That’s the one I was leaning for – another being Second Coming, but other bands had already used that – but I really like Vertical Smiles a lot. It shows our mentality at the time (laughs) but the record was done, and the President of the record label asked Jani if he would write one more song for the record, something that was a cross between ‘Pour Some Sugar on Me’ and ‘Love in an Elevator’ but obviously Warrant.

“So Lane did just that and knocked out that song. We demoed it and then re-set up the drums and went back into the studio and recorded the track really quickly – we didn’t have a whole lot of time to think about it. We had some friends come down and do gang vocals with us on it. A couple of guys from Danger Danger were there, C.C Deville played the guitar solo on it, and we just had fun with the song. We didn’t take it terribly seriously, we just went in there and did what we did, and it turned into a monster of sorts.”

With the surprise emergence of grunge music, many glam bands took a fatal hit, with Warrant feeling the full wrath of the changing tide.

“Oh, yeah, we were a punching bag,” Turner remembered. “All of the ’80s bands were. It was fashion and style to bag out on us and hate on us while everybody else was singing about more serious issues like heroin addiction and drug addiction and depression and suicide and all that dark shit. I really liked a lot of those bands, personally. I liked Alice in Chains and Soundgarden – I thought they were insane – so we were fans of that music. But at the same time, the world felt like it was okay to make the ’80s bands their punching bag, so… But you know what? We were really lucky. I mean, we had gotten a new three-record deal with a label called C.M.C, and they gave us a grip of dough. Looking back at it now, I can’t believe how much money they gave us, so we did some records. We did Ultraphobic after Dog Eat Dog, and then we did Belly to Belly in ’96. In ’94, we put out a record and toured, in ’96 we put out a record and toured. In ’97, we put out a live album and toured. Then we did a Latest and Greatest where we re-recorded a bunch of songs and added a couple of new ones to that. In 2000, we did the Under the Influence CD where we did a bunch of covers and a couple of originals. The band has always toured. I think the least we’ve ever worked since we started the band was one year – I’m not sure which one, maybe 2008? – we played fifteen shows. For us, that’s like breaking up (laughs). Every single year, we play 50, 60, sometimes 90 shows, it depends on the market. We have been lucky. We’ve always stayed in the game; we’ve always kept playing music; we’ve always gone out and played; we’ve always been active with our fans and social media. We just don’t make it to the Superbowl every year like we used to (laughs).”

Harder, Faster, Louder is out now via Frontiers Records