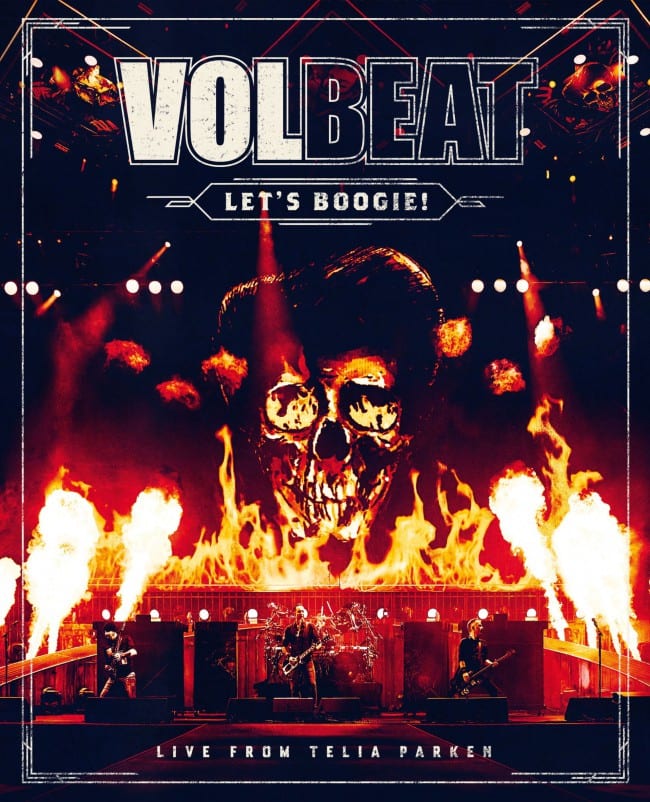 I’ll admit, I am a massive fan of Volbeat. They’re one of those bands that I can get excited for, be it a new album are going to see them live. So getting the opportunity to review their new DVD is pretty exciting. Let’s Boogie: Live From Telia Parken show them Danish rockers at their best and live in their home country of Denmark. Volbeat are no strangers to performing in massive venues to sold-out crowds, yet, it’s really nice to see them perform in Denmark, there’s just something so genuine about performing to your own countrymen and women. Having seen them in a similar environment, at Graspop 2014 & 2016, I can definitely say that it would have been a good show to attend. For those who have never seen Volbeat this way, this DVD is the next best thing, put it on a high definition TV and crank the sound way up!

As far as the DVD goes, the production is excellent. Everything is of fantastic quality from the camera work to the stage show and of course, the music is amazing. Volbeat fully delivers on the rock ‘n’ roll with a great mixture of all their material. Volbeat have such a great back catalogue of hard rock, country and punk they just made a setlist filled with hit after hit. The crowd delivered to for the show as well, singing along to every song and their audio is picked up wonderfully and is well integrated into the live mix. As well as a great setlist, Volbeat also provides a fantastic stage show. With Michael Poulsen standing in a stylised wrestling ring and the band taking full advantage of the space around them. Also, the pyro-techniques are quite impressive, because… you know, it wouldn’t be a real Volbeat show without fire on the stage.

I just love how well paced the setlist is. A great mix of fast-paced tunes and massive anthems, the DVD just flies by and before you know it, it’s over. Not in a bad way, Volbeat are just such an engrossing band, they just draw you in for a good time. Frontman, Michael Poulsen is a great frontman. He has a warm and inviting presence as he talks to the crowd. He is such a showman at heart and you can see, in the way he talks to the fans, that he just loves and lives for this. On a personal note for me, pretty much all of my favourite Volbeat songs are here, “Heaven Nor Hell”, “Goodbye Forever” and “Lonesome Rider”. I mean that was just nice to see on the tracklisting and those songs are done well. Also, at this show they debuted a new song with “The Everlasting” which I quite like. It fit in to the setlist well and it makes me excited to see what’s next for Volbeat.

What else can I really say about this DVD? It’s really damn good. Any fan of Volbeat should get this DVD, especially if you have never seen them live. If you’ve never had the chance or you live somewhere that Volbeat can’t play venues like this, then yeah, go get this. It’s a pretty good experience. The show is well filmed and the live mix really brings that atmosphere of a Volbeat show to life in your living room. Even if you’re not that into them this might still be worth the investment. As it’s all their greatest hits in one place and the enthusiasm of both the band and crowd is enough to keep anyone entertained.

PrevPrevious.THE MAGPIE SALUTE and MAKER at Electric Ballroom, London on 11/12/18
Next.BLACK STONE CHERRY at The SSE Wembley Arena, London on 14/12/18Next