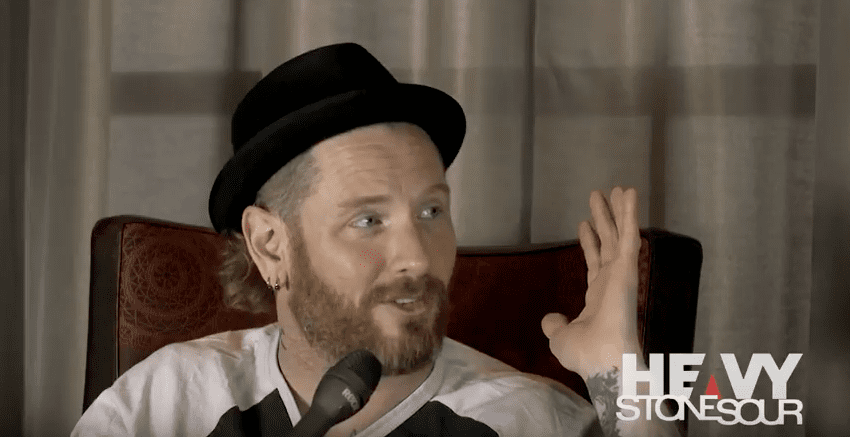 HEAVY interviewed Corey Taylor, the frontman of Stone Sour, for a comprehensive insight into their new album, HydroGrad, along with the band’s history and the correlations between Stone Sour and Slipknot and more.

HydroGrad is due for release on the June 30th, 2017 through Roadrunner Records and Warner Music Group, and the band are touring Australia in August 2017. Tickets available on www.livenation.com.au/blog/vip-nation-stone-sour

Part One of the written interview with Corey Taylor delves into Hydrograd and the album process, while Part Two goes a little deeper into the beginnings of Stone Sour and the effects both bands have had on Corey Taylor and the progressions Stone Sour has made as a band.

As vocalist for both Stone Sour and Slipknot, Taylor holds centre stage in the world’s two leading metal and hard rock bands, and after recently completing a two-year touring cycle with Slipknot has turned his attention fully to Stone Sour and their upcoming album, Hydrograd.

“It’s really that good!” Taylor enthused when asked if the hype surrounding the album was justified.

“In fact, it’s better than you think, it’s just that damn good. It’s been a long time since I’ve been this excited about a project and everything about it. The way we recorded it, the songs themselves, the fact that it’s this group of guys and the reaction we’re getting from everything is just fantastic. It’s going to live up to the hype, trust me.”

In the lead up to the first two singles, “Fabuless” and “Song #3”, which were released in quick succession, Stone Sour drip fed information through strategically placed teasers on their Facebook and web pages, heightening anticipation and sending fans into raptures over the cryptic clues that were being left. Taylor admits that although it was a cleverly created marketing ploy, he also gained a little satisfaction out of teasing his fans.

“Fabuless” features the lines: ‘It’s only rock and roll but I like it, like it’ and ‘been a long time since I rock and rolled’, which are in direct reference to two popular hits of yesteryear. Taylor admits that while he wasn’t setting out to make a musical statement, the irony isn’t entirely lost on him.

“A little bit,” he replied when asked if it was a conscious decision to put the lines in the song. “The cool thing about that is it wasn’t even something I was thinking about doing until I was kind of sitting there and listening to music. For some reason, those two lines popped into my head in quick succession, and it was kinda like, ‘That’s cool,’ so I went with it (laughs). If other bands can use samples and whatnot, why can’t I use different lines with a different type of aggression without completely biting the melody and just use the attitude? And that’s what I wanted was that attitude. It felt great and worked perfectly.”

The film clip to that song showcases a band that seems to be enjoying and thriving in their environment, with the members joining the crowd and watching air filled dancing tube men take their place on stage towards the end.

“Yeah, we did man, we had a lot of fun with that,” Taylor laughed. “Everybody asks me about the video, and it was Roy’s idea (drummer Roy Mayorga). We had that idea seven years ago, and we never had an opportunity to be able to do it until just now. We were thinking about videos for this run, and we were all like, ‘Dude, what about Roy’s idea?’ and it lined up beautifully. We were able to get our friend Paul Brown, who was actually originally going to do the video seven years ago, and he still had all his notes written down, and he knew exactly how to do it, and we nailed it! It was perfect.”

While many people are trying to discern a meaning for the album’s title Taylor admits no matter how much they look into it; they will come up empty handed.

“It doesn’t mean anything, seriously,” he laughed. “It was just my brain misinterpreting information. I was running through an airport in Eastern Europe, and it hadn’t really been upgraded yet, so the information at the gate and the technology was a bit antiquated. I was desperately trying to find my gate and dealing with the digital, ‘80s block letter number, Casio watch-looking thingy, and it was cycling through different languages as well and I had the twelve strikes against me (laughs). I’m running, and I’m looking, and I ran by one gate, and my brain just saw the word ‘Hydrograd’. I thought ‘Hydrograd, what the hell is that?’ And I stopped, even knowing I was going to miss my flight because I just had to know what this is. I turned around and went back to the gate, and I waited and waited, and it was cycling through, and it didn’t say ‘Hydrograd’. It didn’t even start with an ‘H’! I think it was Milan, that’s all it was: just one more clue of me being a mental case (laughs). But I walked away thinking it was a cool name and it just stuck with me, and that was eight years ago. I wrote a song for this album called “Hydrograd” and thought it was a cool name for the album and metaphorically it fits into what we were going for with the album. It doesn’t have to mean anything. It can just be an album you put on, and it just rocks, or it just helps you. You can listen to it and you feel it, you don’t need to understand it.”

Over four albums (House and Gold and Bones was a two-disc release) Stone Sour has refined and honed their sound, never delivering what fans expect from them, but rather catering to their own musical whims. And as such, Taylor says the sound on Hydrograd is yet another extension of the band doing things on their own terms.

“I feel like over the years we’ve established ourselves as a band that can handle anything and really dip our toes into anything,” he mused. “So with this album, we were kind of filling in the blanks in between and wearing our influences a little more out there. Whether it was just straight up rock and roll, or hard rock, or metal, or punk, or country, or a host of other styles that we wanted to experiment with and really see if we could excel at it, I feel that we did. For us, it was just more about what type of songs do we wanna write and record in this day and age? What type of genre do we wanna try out? What kind of ways could we take something classic and make it modern and I think the overall vibe of this album is that it’s a classic feel but with a modern vent avenue. It feels really good.”

After bursting onto the scene with their self-titled debut monster in 2002, Stone Sour went a little mellower and more melodic on the follow-up, Come What(ever) May, and even more so again on Audio Secrecy, with Taylor conceding the band set out to develop their sound as their career progressed.

“Absolutely,” he affirmed. “We’ve always been a band that has wanted to evolve from album to album – the biggest jump being from Audio Secrecy to the House of Gold and Bones albums. We want to be able to stretch artistically and create something really, really creative and have a scope that we’ve never tried before but we’ve always tried to do that and expand that boundary with every album. We want to get it to that point and bring the audience up with you until they get to the point where they learn to expect the unexpected, and they’re ready for something that they’re not… they never saw coming. That’s what a band is supposed to do. That’s what bands used to do. There used to be an intense curiosity and anticipation when a band put an album out. Now, because of the way that a lot of people treat music and approach music, you can almost set your watch to the type of music that you’re going to hear, and it’s boring, and it’s lifeless, and it’s fucking pathetic. For us, the best thing that we ever did was establish that and keep the people guessing and keep them coming back. I think that’s one of the reasons why they keep coming back and that’s why they’re going to be blown away with Hydrograd because it’s even a step further and it’s gonna be insane!”[/vc_column_text][/vc_column][/vc_row]