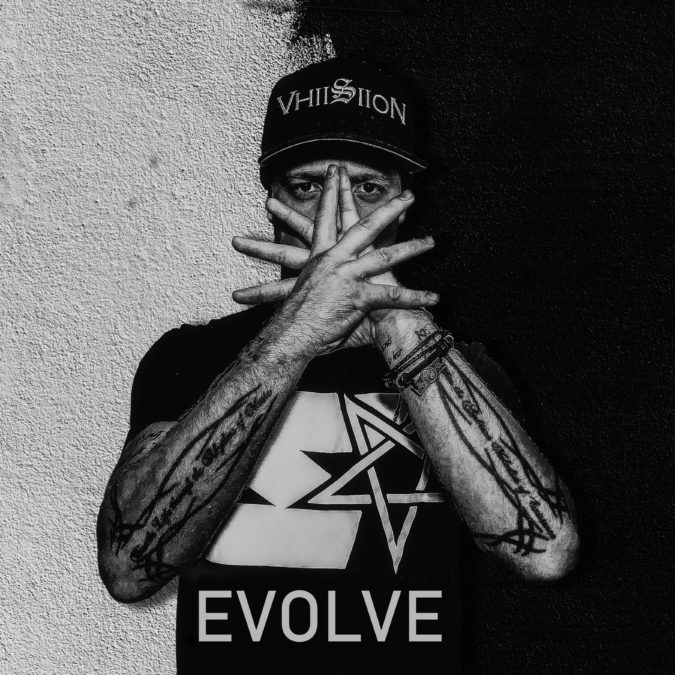 With an effective blending of nu-metal, metalcore, punk and rap undertones, Evolve, the debut EP from New Zealand artist VHIISIION, is an outstanding effort from a performer still in the early stages of his career.

This five-track release sees VHIISIION explore the many stages of the nu-metal movement, in the process creating an atmospheric and innovative approach to an aging formula. Each song maintains a raw intensity of rage over peace, with subtle breakdowns mixing through a mass of guitars that never threaten to dominate the vocal dynamics.

Opener “Life of the Party” is the perfect introduction to VHIISIION’s music, with an extended intro that begins with swirling guitar before speeding up somewhat and showcasing a selection of guitar riffs that highlight the chaotic nature of what is to come. By the time the vocals kick in around the one minute mark, you can already feel the vibe of the material and have a fair idea of exactly where it is headed.

Machine gun vocals give way to clean singing and harmonies while the underlying aggression of the music is never far from the surface.

The title track and single from the EP starts with a massive breakdown that gives way to more guitar and licks that drive the song while album closer “Dig Up The Hatchet” is the standout track, and also the most rap based tune on the EP.

With guitar again dominating proceedings, “Dig Up The Hatchet” has a catchy chorus that will surely get stuck in your head after a few listens and an anthemic feel that almost dares you to not stand on your chair and sing out loud.
In fact, every song on Evolve has that anthemic, stadium type feel that wouldn’t be out of place in either a nightclub or live music stage.

While heavily influenced by bands like Limp Bizkit, P.O.D and Drowning Pool, Evolve still maintains that ever-elusive element of originality that sees it stand on its own merit without the inevitable comparison.

VHIISIION clearly has just that when it comes to music and it will be exciting to see how his career progresses from here.