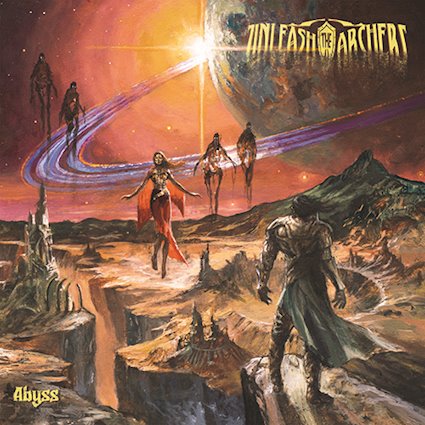 Imagination! It is probably something so many of us needs in 2020 as we try to escape a reality that for many of us has been something a lot harsher than we would ever have expected. That imagination is also something that fuels the creativity behind Unleash The Archers brand new album Abyss.

Once again the album sees the listener carried to the world of the Matriarch and the Immortal, the world that we were first introduced to on the band’s previous album – Apex. This time around the Immortal returns and the journey goes into space… once again revealing the amazing story-telling ability that the band has, led by Brittney Slayes original concept.

What makes that story come to life even more is the magnificent musicianship which comes to the fore on Abyss. There is a new found maturity to Unleash The Archers on this album. With that maturity seems to come the courage to be a little bit more experimental with their sound this time around. The result is an album where you never really know what you are going to get from track to track.

A preview of that is there on the opening track – “Waking Dream” – which opens with a gentle folk metal vibe that is then blown away by the amazing vocals of Slayes. From there the album meanders its way through the story touching on a number of genres as it does.

The faster pace of “Abyss” reaches an epic level that remains for most of the album while the band also gives a fair few nods to the bands that have inspired them over the years as well. “Through Stars” has a definite old school metal feel to it while the very theatrical “Carry The Flame” is a direct nods to bands like Scorpions.

What leaves you marvelling with Abyss though is the band’s way they marry the newfound metal sound with the old school. “Return To Me” sees Unleash The Archers deliver gruffer vocals that at times turn guttural. The track is sheer modern day brutality but also seems to capture that old school sound made famous by bands like Iron Maiden.

This really does feel like an album where everything comes together for Unleash The Archers. The work of guitarists Andrew Kingsley and Grant Truesdall on this album is nothing short of amazing. Their work on tracks like “Legacy,” “Soulbound” and “Faster Than Light” places them amongst some of the best guitarists in the world, while the band is brought together by the amazing vocals of Slayes which seem even stronger than ever.

Perhaps Abyss as an album is best summed up by its final track – “afterlife.” Like the album itself it is brutal at times and then drifts into a smooth folk metal sound that closes out the album and the story at hand. It is power metal perfection, just like the album it is on.

Abyss is a stunning album that I cannot wait to see brought to the stage. Stunning musicianship and a concept that really draws you in finds Unleash The Archers releasing their best album to date.