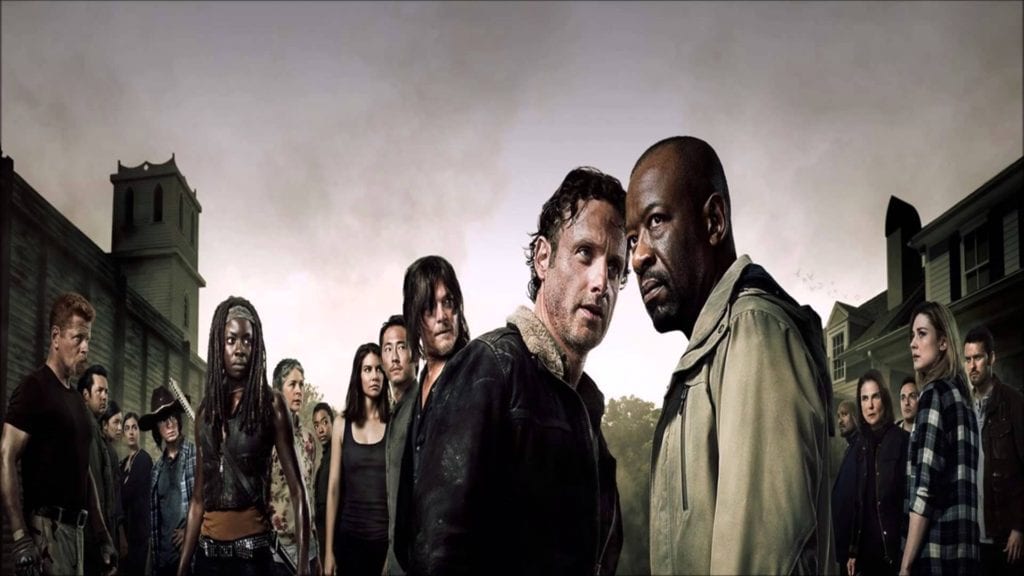 With Season 6 now released on DVD (thanks to our good friends at eOne Entertainment), we decided to recap each season before Season 7 hits our television screens in a few weeks. Stay tuned to the HEAVY website over the next couple of weeks for Walking Dead content exclusive to Australia.

But first, here’s a sneak peek of Season 7 of The Walking Dead.

Our trusted hero Rick Grimes (Andrew Lincoln) wakes up after being in a coma. He quickly discovers that a virus has spread across America and the result are hordes of what he dubs ‘walkers’. These walkers are the kind of zombies who either bite you and the infection spreads, or eat you. It all depends on how quick you are at getting away.

After meeting up with Morgan Jones (Lennie James), Rick heads off to Atlanta, which is rumoured to have been quarantined, in search of his wife Lori (Sarah Wayne Callies) and son, Carl (Chandler Riggs).

Rick finds the group and discovers that the walkers have overrun Atlanta. The group come across The Center for Disease Control and learn from Dr Edwin Jenner (Noah Emmerich) that the outbreak cannot be contained and that technically, everybody is infected. The CDC is set to explode and Dr Jenner wants to take the group down with him. He is killed, but our group of heroes manage to escape.

The group head for Fort Benning, but after Carl is accidentally shot they head to the farm of veterinarian Hershel Greene (Scott Wilson) and his family Beth (Emily Kinney) and Maggie (Lauren Cohan). Hershel patches up Carl, and the group decide to stay with the Greenes. But not everything runs smoothly. Rick and Hershel clash on some issues — the biggest being Hershel’s refusal to kill walkers because he believes he can cure them.

Rick loses trust in both Shane and Lori after he discovers their relationship. Daryl sinks into depression, and Carol struggles to deal with the loss of her daughter. In fact, the only person who seems to be enjoying his time at the Greenes is Glenn, who starts a relationship with Maggie.

Eventually, Rick and Shane come to blows resulting in the death of Shane. Their reckless actions lead to the walkers attacking the farm and the group have to flee. Andrea is left behind, but she’s rescued by a mysterious figure who keeps walkers on a chain.

Eight months after the night of horror at the Greenes’, Rick and his group stumble across an abandoned prison. After clearing the compound of walkers, they make themselves at home, but tragedy strikes. Hershel is bitten and his foot needs to be amputated, while Lori dies during childbirth and has to be shot by her elder son Carl before she turns. Her death throws Rick onto the path of mental illness, as he begins ‘seeing’ her ghost everywhere.

Meanwhile, Andrea and her newfound friend, the modern-day warrior Michonne (Danai Gurira) are taken captive by Merle and delivered to a settlement run by the ego-maniacal The Governor (David Morrissey). The Governor learns about the group at the prison and decides that they are a threat. He takes Glenn and Maggie captive, and a series of attacks between the two factions commence.

The Governor continues to lose his mental stability, and his behaviour becomes so erratic that he ends up torturing Andrea. This results in her killing herself and Rick’s group launch an attack on the prison. Rick’s group come out triumphant and The Governor and his commanders are sent packing, while the rest of his group are welcomed to stay.

The two groups seem to be happily co-inhabiting at the prison, but the joy is short-lived when a flu epidemic sweeps through the complex. Many die and Carol becomes exiled after killing some of the infected.

The Governor returns and manages to capture Michonne and Hershel and uses them as leverage against Rick. Another battle erupts, killing The Governor and Hershel, but not before the prison is severely damaged and left to be overrun by walkers.

Rick’s group escape in different directions but they all head to the same destination: a railway depot said to offer safety and shelter. While various members of the group meet Glenn and Tara (Alanna Masterson), others run into Abraham (Michael Cludlitz) and Rosita (Christian Serratos) who are helping Eugene (Josh McDermitt), a supposedly ‘gifted’ scientist get to Washington where he believes he can cure the walker epidemic. The group soon realise that the people at Terminus are not who they seemed and they find themselves taken captive.

The group realise that they are about to become food for the Terminus inhabitants. Luckily, Carol and Tyrese (Chad L. Coleman) launch an attack on Terminus and rescue the group.

Afterwards, they stumble across a church run by Father Gabriel Stokes (Seth Gilliam). While most stay, Carol and Daryl leave in search of Beth, who they believe has been kidnapped. She has been taken to a hospital run by corrupt police officers. In trying to rescue her, she is killed in the process and the group are collectively shattered.

The group soon travel in search of a new home. They come across Aaron (Ross Marquand) who takes them to the fortified community of Alexandria run by a former senator, Deanna Monroe (Tovah Feldshuh).

Rick and the group find it difficult to settle into Alexandria. Rick believes the community is not protected enough and schemes with Carol and Daryl against Deanna. Glenn finds himself at war with one of the locals after the death of a young man.

Everything comes to a head when Rick tries to protect Jessie Anderson (Alexandra Breckenridge) from her violent husband. After being ‘arrested’, her husband kills Deanna’s husband, and Rick is ordered to kill him, just as Morgan turns up.