Top Ten Bands To See At Louder Than Life 2019 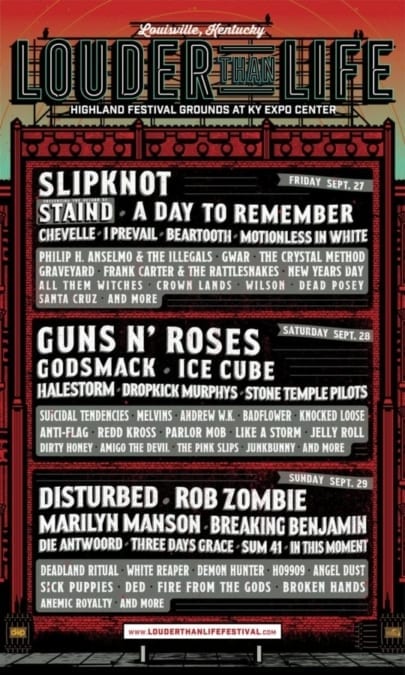 Next month in Louisville, KY, metalheads from all across the US will be treated to one of the best rock festivals to happen every year. At a new location and with an extra day, Louder Than Life will be bringing the southern state an incredible festival with the most impressive lineup of the year. With over 60 killer artists performing over the course of the three day weekend, it’s easy to be conflicted over which acts to catch. To help the choices be a tad easier here are the top ten artists playing Louder Than Life 2019!

Kicking things off at number 10 is a band I was very excited to catch out at Danny Whimmer’s summer music festival, Epicenter, back in May of this year. DED is one of those bands that takes you by surprise when you first see them live. With their unique appearance and fast, to the roots rock sound, they bring an awesome and super energetic set to the stage with every show they play.

9. Fire From The Gods

Yet another band I excitedly awaited to see at another festival back in 2017, Fire From The Gods is honestly one of my favorite bands to see on a festival lineup. With their heavy sound and ability to get their fans moving almost instantly, Fire From The Gods is truly one of those bands that are meant to play outdoor festivals. If you happen to be lucky enough to catch one of their killer sets, by all means do it! It’s one you will not regret. As a plus, if you like Moshing and Walls Of Death, their sets are always full of them.

Our first headlining act in the top 10 is probably one of the most anticipated sets of LTL 19. Likely to close out the first day of the festival is none other than Slipknot. If you’re into true heavy metal shows that’ll keep you up and at it the entire set, then Slipknot should be a must see for you. With their strong stage presence and iconic masks, Slipknot is one of those bands that regardless if you are a fan or not, you have to see at least once in your life.

If you’re after something a bit lighter than the heavy artists playing out at the festival, but still want that fast up beat energy, look no further than Dropkick Murphy’s. Personally, I am a huge fan of their sets. With their lively energy and unique rock/Irish sound, Dropkick Murphy’s have truly set themselves apart from many bands today.

6. A Day To Remember

A Day To Remember is one of those bands that will forever hold a special place in the hearts of your 2000s pop punk kids. However, as the years have gone on, A Day To Remember has become a band that all rock fans have found a love for. With their strong lyrics and great crowd connection, the band has the ability to captivate their crowds instantly, making for a beautiful crowd connection that ultimately leads to awesome sets.

VIDEO: A Day To Remember – This Is The House That Doubt Built

There aren’t many bands I have waited many years to see, however New Zealand’s own Like A Storm is one I have waited upwards of close to six years to catch. Though Like A Storm is without a doubt a rock band, they have managed to mesh together hard rock with instruments like the didgeridoo and Djembe drums, giving an incredible twist to their music that is unlike any other.

VIDEO: Like A Storm – Love The Way You Hate Me

If you have ever seen Halestorm live, it should come as no surprise that they are on this list as number 4. They have a powerful stage presence, and front woman Lzzy Hale’s awesome vocals are reminiscent of rock icon, Joan Jett. Halestorm brings a show that feels almost as if it’s a blast from the past, true to roots rock ‘n roll.

Picking up the number three spot on my list is one of my personal all time favorite bands, Motionless In White! Now, if you somehow have never heard of these guys then you’ll truly be in for an unexpected surprise during their set. They have a unique metal sound that blends together hints of halloween like themes with their gothic and theatrical appearance. Motionless In White is one of those bands that has a phenomenal stage presence, one that is all theirs and unlike anybody else’s on the lineup.

VIDEO: Motionless In White – Another Life

If you’re looking for a set that’s completely different from any other on the LTL 19 lineup, look no further than In This Moment. Out of all the bands I have had the opportunity to see, In This Moment is one I get extremely excited for. The band has a presence and connection with their fans that is truly unique. Not only do they put on one of the most theatrical and captivating performances, they also own any stage they take, regardless if it’s inside of a club or on festival grounds somewhere.

VIDEO: In This Moment – Whore

Number 1 should come as absolutely no surprise to any metalhead. A spot that’s absolutely, undeniably been earned by Rob Zombie! If you are looking to watch a set that’s more than just “another set at a rock show”,  then this here is one you cannot miss. Regardless if you’re a fan of the icon or not. For years, Rob Zombie has put on distinctive shows in the music scene. His lively and energetic stage persona is absolutely jaw dropping, as is his fast, heavy sounding music that’s a style on on its own. It’s safe to say catching him out at a festival truly will make for a highlight moment for anyone in attendance.

Louder Than Life will take place on September 27th through the 29th on Highland Festival Grounds at Kentucky Exposition Center in Louisville, KY.

To buy tickets to Louder Than Life 2019 click here:

Louder Than Life on social media: