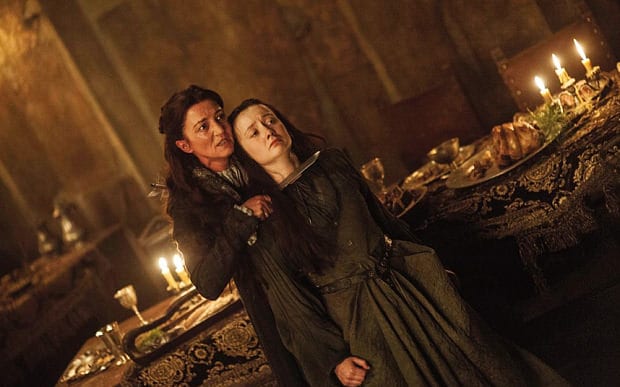 Season 7 of Game of Thrones will begin in Australia on Monday, July 17th. The season will run shorter than the traditional 10, with only 7 episodes to be followed by a 6-episode eighth season that could conclude as late as 2019. However, we are beginning the final leg of what has been a remarkable television journey, and to celebrate, we thought we’d cast a look back to ten of our favourite moments from the show in the lead up to the season premiere. Dave Griffiths will also be interviewing members of the cast in the upcoming digi-mag, so be sure to check that out.

The Red Wedding was a turning point both narratively and in the cultural influence of the show. Critical appraisal of the ninth episode of Season 3, The Rains of Castamere, was so high that it led to an Emmy nomination for the writers D.B. Weiss and David Benioff – the series has since won Best Drama. People who have never watched Game of Thrones know about the Red Wedding. We live in cynical times where audiences have become very sophisticated and used to certain ways of telling a story.

It takes a lot to surprise them, but George R.R. Martin’s saga has done it a few times, to the point that the show became predictably unpredictable. Jaime losing his hand, Ned losing his head, and Theon losing his… and well, who didn’t have their minds blown at the conclusion of The Mountain and The Viper? Part of this, however, was the gruesome gore factor that was full of tight, suffocating close-ups that made you feel the horror of dying that way. The Red Wedding has shocking, gory images in it, too. No one is going to quickly forget the speed and viciousness of that blade going into Talisa’s (Oona Chaplin) pregnant belly anytime soon. The book readers may have been smug in the knowledge of knowing what was coming but even they couldn’t have been prepared for that. The whole sequence opens with a sense of foreboding before kicking into gear with that wonderful refrain of The Rains of Castamere, and Lady Catelyn Stark (Michelle Fairley) pulling back Roose Bolton’s (Michael McElhatton) sleeve to reveal chainmail. Who could have predicted all that followed though would happen? Wasn’t somebody going to get out alive?!

Originally, this felt like one of the central premises of the show: the battle between the Starks and the Lannisters. It couldn’t end here with just a massacre in a hall, could it?! Of course, it hasn’t really, as proven last season when Stark banners unfurled over Winterfell again, and Arya (Maisie Williams) dispatched Walder Frey (David Bradley) in the very same hall where the Red Wedding took place. At the time though, it was a shock to the system; a shake-up of the status quo and the dispatch of several beloved characters. None of those things is what gives it such impact, however. It is because it is about a mother watching her son murdered and trying to save him. Michelle Fairley’s acting here must be lauded as she plays a variety of escalating emotions in such an intense sequence. It says a lot about this world that the last actions of Catelyn Stark are to kill an innocent in Joyeuse (Kelly Long). But she does it not out of spite for the murder of her son Robb (Richard Madden), but because she swore she would. There was a time when you couldn’t have the good guys do that in a television program.

The Red Wedding was shocking, heartbreaking, seminal television, and it changed everything.

PrevPrevious.[FILM NEWS] BIRTH OF THE DRAGON Trailer
Next.Top 10 Countdown – GAME OF THRONES Season 7 – #2 “I Will Lead The Attack”Next