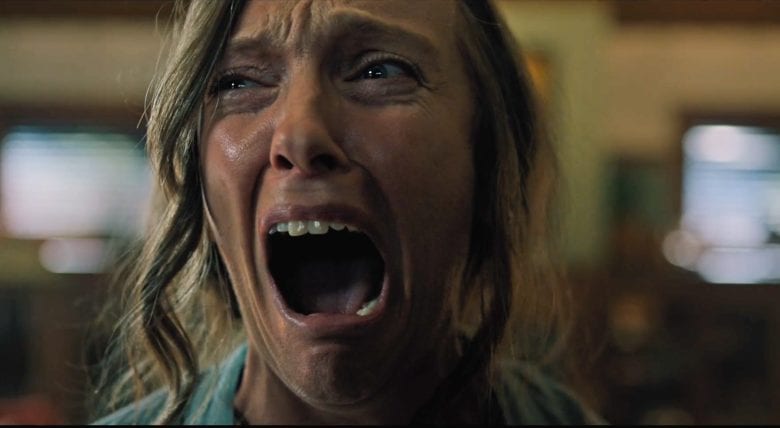 One of the most anticipated films of this year has to be Ari Aster’s debut feature film – the indie horror Hereditary. Gone are the days when horror had to be just slash and gore and instead a new breed of horror filmmakers are making films like The With and Get Out, films that are being described as more arthouse then one would normally expect from the horror genre.

Starring in Hereditary is Toni Collette in a performance that many are calling the best of her career and she is very quick to sum out what her character goes through in the film. “I play a woman who is experiencing an awakening of sorts,” she explains.  “At the start of the film she is suffering from loss, her mother has just died and you quickly realise that it wasn’t the kind of idealised relationship that a mother and daughter shares and that this woman missed out on a lot of the loving and nurturing that a kid is really owed when they are growing up. So the film is about her coming to understand what her family means and where they come from, what their intentions are and what her own existence really entails and it is really, really confronting and shocking.”

The other word that most critics are using to describe the film is unique, something that Collette admits that the film really is. “The one thing that I would say that is unique about the film is, and only because I have never worked in this way before, but it was so intensely emotional,” she says.  “I think as a younger actor I used to love the grit and the grittier it was the better, but I’m not into that anymore, and think that i had such strength and it spoke to me in such an intense way that is was a case of me avoiding what I had to do until they called ‘Action.’ I think that was the only way I survived it, and since then I have wondered ‘geez I wonder what the experience would have been like if I had really given myself over to it but I don’t think it would have worked because it was just too much. I think that this was the only way to survive it and to give a reality to every moment as it was required instead of existing in something that would be have been really exhausting for 24/7 or a longer period of time.”

It is clear after watching the film that director/screenwriter Ari Aster is something to really watch in the future – he has pure talent and that is something that Collette agrees with saying despite some ‘odd moments’ in the film she was never lost. “Really I didn’t have to look any further than the script,” she says after thinking for a moment. “It was so brilliantly written by Ari Aster, really he is a wonderful writer because he just gets what it means to be human, he understands dynamics between humans and discovers how complex it is to literally exist, so he created something so honest and so raw, I really didn’t have to look beyond that and if I did I would just look up to his face and he would have an answer should I have a question. “Working with Ari is such an incredible pleasure because he is very, very  clear about what he wants at any given moment. He has lived for so long with this story in his head and he knows every single cutting point and everything that he wants. He even knows how he hears the line but he does leave room for interpretation and collaboration. There was one particular scene where it was a very long shot and it was towards the end of the movie when my character is quite maniacal and she is trying to convince her husband to sacrifice herself in order to save her son… quite literally. And there is a moment where I convince him to come downstairs and I kind of explain what is going on and I ask for his help and it was a long scene and the words that were written were not quite enough and I was also very loyal to Ari and what he wrote, but I did a take that way and it didn’t feel right because there wasn’t enough on the page and the scene was so emotionally big, it’s kind of a begging scene, a pleading scene and a declaration of true, true love. I literally took a moment and I thought I just have to fucking give it and I had to tell myself to get over whatever fear was in the way and just get it done and so we did it again and it just felt so alive and I didn’t stick to the exact dialogue and it was the only scene where I improvised in and it was so spacious and needed and I needed that freedom to convey the reality of that moment, and the most gratifying moment of the whole film was when I knew they were planning other coverage and sometimes when you do something and you know that you get it right in the way that feels really real you know there is no way that you can repeat it, it just feels like you are mimicking it or trying too hard again and Ari turned to me and said we didn’t need any more shots and I was like ‘THANK YOU!’ That was it.”

Unlike a lot of actors Collette also says she isn’t going to tell people what to think when they go to see this unique film. “I think it is such a didactic thing to tell audiences what they should think should expect because everybody comes to the cinema with their own experiences in life so you respond to things differently,” she says carefully choosing her words. “I hope that they understand that this isn’t just another horror film full of gratuitous scares. There is such a profound beautiful story within this and it is very sad and very moving, it does become deeply shocking and upsetting so it is a bit of a rollercoaster but it is an exciting new voice in cinema a man making a film in a very original way and that alone make it worth seeing the movie. But the content of the movie is also really, really special and I think that it will excite people more than it intimidates them.”

Hereditary is in cinemas now.