[ALBUM REVIEW] THUNDER: Rip It Up 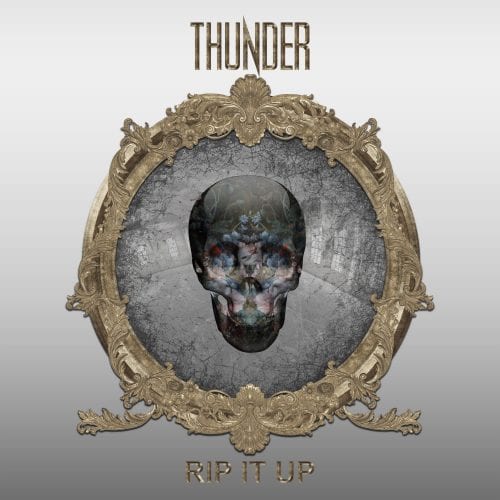 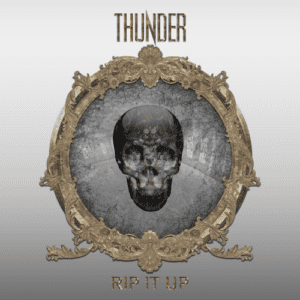 Danny Bowes, Luke Morley, Ben Matthews, Chris Childs and Harry James are back with their new album ‘Rip It Up’. Released on the 10th of February 2017, featuring 11 songs for their 11th album after almost 3 decades of great music, they continue to release great melodic rock. The new album is described as ‘a bulging bag of tunes’ and a ‘notebook of great lyrics’ as well as a ‘Jerrycan of petrol and a match’, but it is so much more than all of that. With their UK tour starting in March 2017, these Londoners have had a summer of great gigs including shows at ‘Ramblin’ Man and ‘Steelhouse Festival’.

The album cover looks like a mirror, but with a skull staring back, it’s almost like a piece of the band or the listener staring back. The more you look at the album cover, the more you see the details in the skull. Most album covers can tell a story, and I believe this is no different.

This album is for everyone, if you like a bluesy rock track, listen to, ‘There’s Always A Loser.’ If you are a sucker for a great rock ballad like me, then put on track 4 which is ‘Right From The Start.’ Danny has this melodic voice, that you can just listen to over and over again.

What I love about the opening track ‘No One Gets Out Alive’ is the lyrics ‘I’m not going to live forever but that’s alright with me.’ I find myself smiling as Danny is singing. I look goofy whilst doing the sit-down dance; this is something where you sit down, close your eyes and fling your head about. The funny looks I get, but if they heard this song, they would do the exact same as me.

The song ‘Shakedown’ has one of the things I love about guitars; the pick scrape. That sound sends shivers up my spine, and at that moment I’m hooked. In the song you hear this at 02:20 and I immediately get excited for the rest of song.

Whilst writing this review, I listened the first time around, and I sat there just taking in the lyrics. I became so engrossed in the music that at one point forgot what I was doing and by this time I was on the last song; I got lost in the chords, the lyrics, bluesy rock sound. I had to re-listen, which believe me, I was more than happy to do. I’m glad music like this is still being recorded.

This whole album fits together with not a song out of place. I saw this band live in 2013 when they supported Whitesnake and Journey. They were brilliant live and hearing this studio album brought back all the memories of seeing them. All the songs run smoothly into each other, and you can tell that the band have played together for a long time. This album will be a favourite among fans.

Overall a great album by a great band. What I would like is more songs, even though it’s their 11th album and they have put 11 songs onto it, it left me wanting more, which is never a bad thing. I look forward to their tour, and their next album, with bated breath.