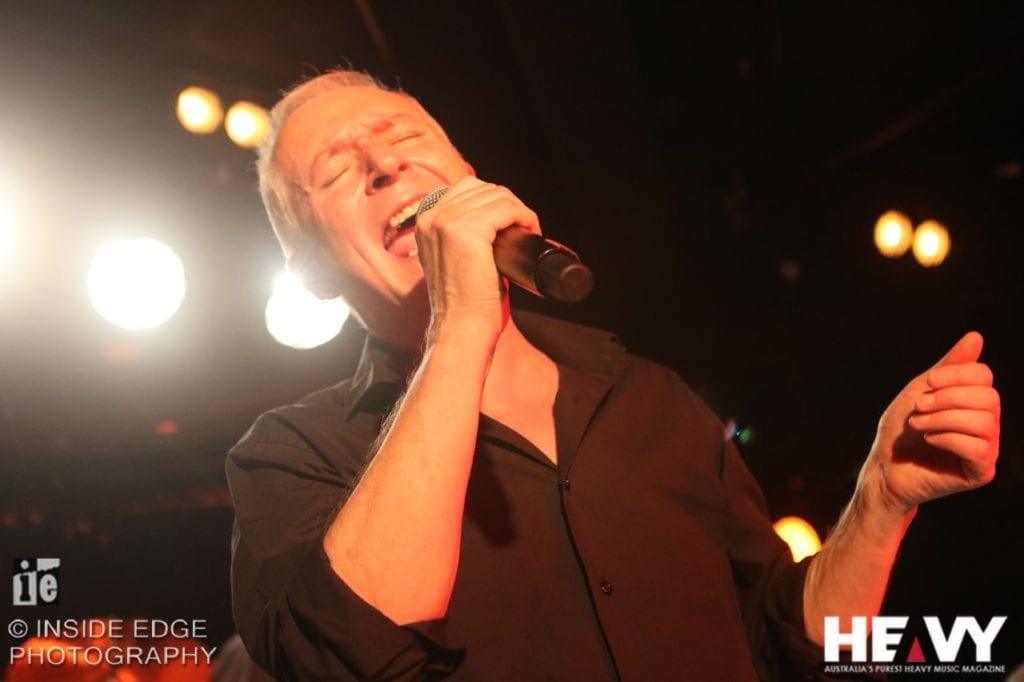 The show began with the classic ACDC song blaring throughout the dark room with a light show in sync with the lyrics. Every time the word “thunder” was chanted in the song the room lit up from the stage followed by a roaring response of the lyric back from the audience. By the second verse, each member entered the stage single file and were immediately greeted with wild cheer as they went straight into their set with No One Gets Out Alive, the first song from their latest studio album, “Rip It Up”.

The English rockers who are subgenre as hard rock or heavy metal officially began in 1989 by founding members Danny Bowes (vocals) and Luke Morley (guitarist) after their previous band, Terreplane, broke up.
From there on the band signed to EMI records and released a string of top 10 singles on the UK charts as well as 11 studio albums. Since their original formation, the band has gone through several line-up changes with Bowes and Morley as the sole original members and additional members such as Ben Mathews (guitar), Chris Childs (bass), and Gary ‘Harry’ James (drums) who have been a part of the group for most of its lifespan.

The group have had a successful career that has spanned 28 years, though 2017 is the first time they have ever toured Australia; needless to say, the turnout was not disappointing.
Their Melbourne show took place at the Corner Hotel in Richmond with a venue capacity of 800 people.
Doors opened at 8.00pm with Melbourne based band, El Colosso, warming up the stage at 8:20 sharp with a 40-minute set.
Described as “heavy rock,” the choice of support was more than impressive.
Though the members are younger, they had a nostalgic vibe and provided the audience with strong vocal harmonies, melodic guitar riffs and a lead singer with a vocal range that can either sound like an early Black Sabbath or Metallica song.
During their set, from an almost empty room, the venue gradually filled with people; although El Colosso put on an amazing performance they deferentially set the stage for Thunder who started at 9:30 pm.

By the end of the second song in Thunder’s set, the venue was bursting at the seams with fans in an age demographic of 18 – 65 on average, which was most impressive for a Wednesday night, although, audience volume was not the only thing impressive about the evening.

At first sight, the band appeared as well presented and sharply dressed men that you would not imagine were in a rock band, but that thought was instantly forgotten in their performance. From the very beginning of the show, Bowes was full of energy and engaging with everyone in the audience, from the front row all the way to the back.
Between transitions of the third [River of Pain] and forth [Resurrection Day] songs, a rude audience member started shouting drunken profanities towards the band and audience members around him, temporarily making the atmosphere awkward and uncomfortable; however, Bowes professionalism and witty humour should be praised as he just stared at the at the man sarcastically and said, “Are you, alright mate?”
This relieved the tension and had the audience laughing.
After the show, while speaking to Chris Mathews (guitar) and addressing the incident he stated,
“Danny has always been good with these types of occurrences; he just doesn’t care for rude people.”

The show went on, and there was nothing about it that wasn’t entertaining;Bowes high notes, vital stage moves and engaging showmanship, Morley’s impressive guitar solos and tantalizingly charismatic stage presence, Mathews’ captivatingly animated stage moves from high kicks to Pete Townsend like windmill strumming, while James and Childs have a rhythm section so tight that it would be the envy of any musician. The whole band was in sync with each other, from stage moves, lighting, solos, and harmonies; it was rock n roll done right.

Power ballad Right From the Start, also from their latest album, had an emotionally powerful response from the audience members while everyone sang along as though this song were one of their classics, which furthermore proves that the group’s songwriting techniques have a timeless effect.

The show had a duration of a 13 song set and a three-song encore, and they definitely saved the best for last, finishing the show with their hit Dirty Love from the 1990 album Backstreet Symphony. Whether you knew the lyrics or not, there was no avoiding singing along to the catchy lines as Bowes had the audience wrapped around his finger. The finale was overall full of cosmic vocals, monumental guitar riffs, exhilarating stage moves and the loud uproar audience response and ended the show with a bang.

The overall performance was amazing, and all members gave a professional performance filled with laughs and fun, as though it were a group of friends getting together and playing music and inviting their audience to have fun with them. Given that this was their first time in Australia, the band left a great first impression; they were very humble and definitely projected their English charm both on stage and off, as well as making time to speak to their fans before and after the show.

Overall, the rating of the evening is a 10/10 and the band most definitely still has it. A high recommendation is to go out and get one of their albums to add to the collection, if not, download off iTunes and check out their video clips on YouTube.
Here’s to hoping Australian audiences don’t have to wait another 28 years to see a show like this again.