THEM EVILS Hit The Road 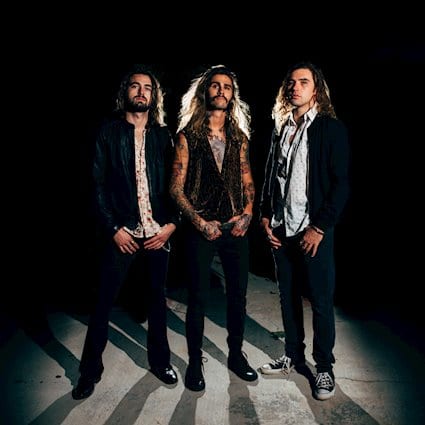 Southern California based Them Evils are heading back out on tour to kick off the New Year in direct support for Pop Evil.  Along the way they will be setting sail on the Shiprocked Cruise, where two live performances are slated.  The band continues to promote their “Rollin’ Stoned and Livin’ Free” EP as they add the track “Practice What You Preach“ to their live shows and put the finishing touches on a new song to be released in the late 1st quarter of 2019. The band played more than 100 dates in 2018, including a national tour with stops at Welcome To Rockville, Carolina Rebellion, and main stage @ Rock On The Range.

Them Evils’ late-night joyride through Rock N’ Roll’s seedy underbelly was born in the shadows of neon vice and nocturnal living in Las Vegas, when Jordan and Jake met in High School.  They started writing and playing together and knew that they had a chemistry that was undeniable. In 2013 they made the move to Southern California to pursue their music professionally – with nothing to fall back on other than their drive and belief in their music and each other. They connected with David through a friend that worked at a bar with Jordan and who knew they were looking for a permanent drummer. Delaney auditioned for Griffin and Massanari, and all 3 knew it was a good fit immediately. The nasty energy befitting their name grew from there.

Inspired by equal parts of rock giants like Led Zeppelin, AC/DC, and Queens of The Stone Age, among others, the band pays tribute to their roots while carving out their own unique sound.  Them Evils music is at times throwback without being too derivative and is thoroughly modern. “We pretty much made our own scene,” Griffin says. “We started out doing straight up rock and roll, and that’s what we’re still doing… That said, we’re always evolving.”

The band has previously released Two EPs: their debut Cold Black Love(2015) and the self-titled Them Evils (2016). They made inroads @ Active Rock Radio in 2017 with “She Got Nothin“, which peaked @ #22 on the BDS Rock Indicator chart.

They were born for the stage and have been road warriors for the past 4 years – the band have caught the ear of no less an icon than Zakk Wylde, who had them open for Zakk Sabbath in 2017.  They regularly does Club tours, as well as toruing with The Pretty Reckless, Alter Bridge, Red Sun Rising, and 10 Years, among others. The band plans to continue touring, with breaks to finish recording additional new music to be released in the latter part of 2019.

PrevPrevious.UN Announce Tour With CHRCH And BODY VOID
Next.CHIN UP, KID Join OFFENDED BY EVERYTHING On TourNext