The last couple of years have been enormous for Michigan’s very own Greta Van Fleet. The hard rockers exploded onto the music scene with their debut album Anthem Of The Peaceful Army. The album saw success right around the world and in December the band found themselves being nominated for four Grammy Awards.

Now the band has arrived in Australia for their first ever tour and HEAVY Mag sat down to chat to band member Sam Kiszka about the wild ride that they have been on and what Australian audiences have to look forward to with the tour.

“What year is it?” asks Kiszka when I ask him what it has been in like being part of Greta Van Fleet over the past twelve months. “Just joking, but yeah it has been crazy. It has felt like it has been absolutely non-stop. It has been more than the last year… it has been the last two year’s straight. But it has felt like it has been a whole life-time that we have been doing this. It’s so busy, every day there are activities and every day is different and the whole only that is expected is that you don’t know what is going to happen next. I mean look at today we just got to Australia from Japan, it is our first time here and it was our first time there. It is the most wonderful thing in the world ever because we get to travel and we get to go around the world and meet all these fabulous people and have these great experiences. So it is the most wonderful thing ever and I can only compare it to being shot out of some cosmic rocket canon.”

“I think the thing about Greta Van Fleet was that our intentions were not to go and get there,” he says as our discussion turns to how the band’s fame has changed his everyday life. “Our aim was always to just play music and be the best musicians that we can be and I mean if we were still playing in bars in front of 50 people I would still be content. As an artist of any kind, a painter a filmmaker or anything I think that as long as you can make your art and express yourself and break even enough to make a living then I think that is the most fabulous thing. I think whole-heartedly we would be still be doing this and I also think that is what pushed us so quickly we think so little about what this actually is and I think when that goes away that is when you start losing touch with reality…. when you start thinking about things too much.”

You can listen to our full Greta Van Fleet interview on Spotify. All their tour dates can be found below. 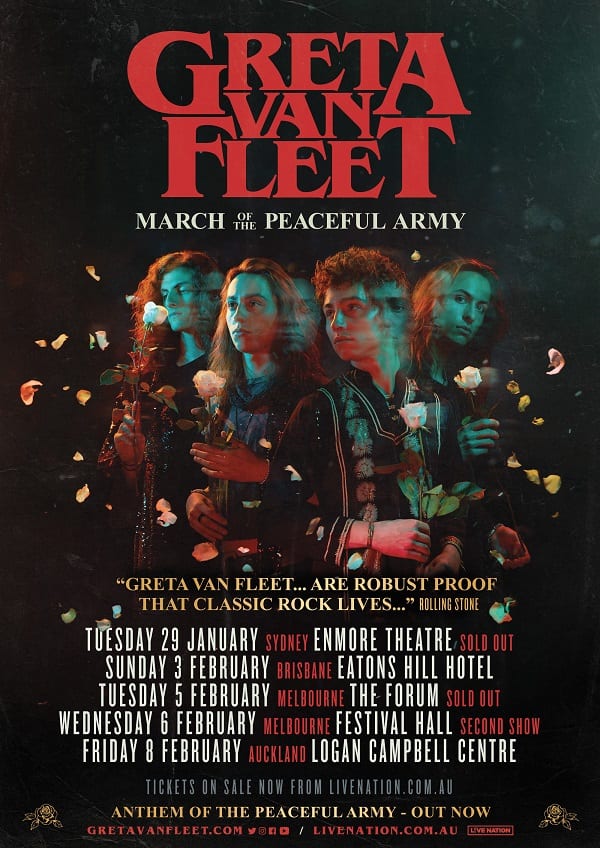