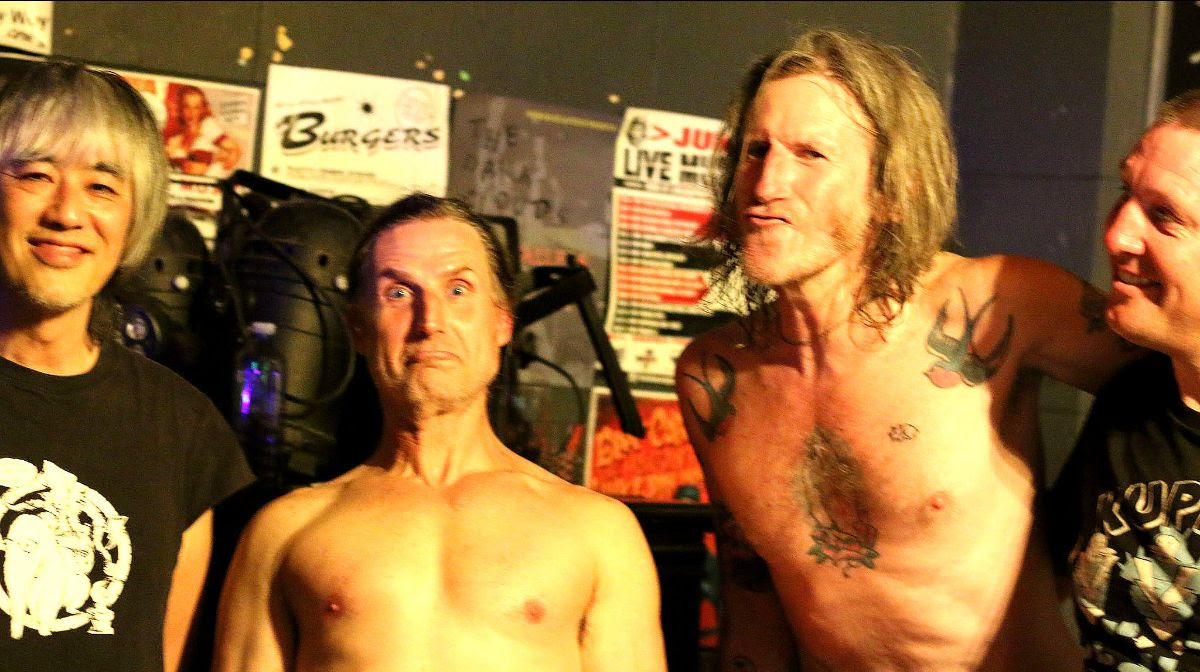 The Hard-Ons are possibly more Australian than vegemite.

Since 1982 the band of miscreants has been an integral part of the Australian music scene, with their high energy live shows, apathetic attitude, sense of humour and catchy as fuck punk rock songs that resonate on all levels providing the perfect platform for a career bordering on 40 years and counting.

The release of the band’s 13th album I’m Sorry Sir, That Riffs Been Taken late last year also saw The Hard-Ons welcome new vocalist and another iconic Australian musician in the form of Tim Rogers (You Am I), heralding a new era for the band and venturing into an unknown future.

That future was vindicated immediately, with the album debuting at #4 on the ARIA charts, marking The Hard-Ons highest ever charting position and justifying their choice of frontman without a live note being played in anger.

After a couple of unannounced warm-up shows – including one under the name Clandestine Sausage in Woy Woy in December – and their first with Rogers out the front, The Hard-Ons officially launched the album tour at Vinnies Dive Bar last Thursday night and judging from the large crowd in attendance on a school night the band have lost none of their charm and pulling power despite a few grey hairs.

Walking out in shorts and casual attire, The Hard-Ons launched into their set with a simple greeting of “Good to see ya’s” and Vinnies instantly came alive amid possibly the most respectful moshing I have ever seen for the duration of a concert.

The older generation have always done it better.

The music was loud – as it should be, and the distortion was plentiful – as it tends to be, but The Hard-Ons were here and nothing else mattered.

Opening with Made To Love You II amid a wall of guitars and bordering on thrash-type metal riffs, The Hard-Ons were like a musical Tardis, transferring the whole room back to a time where sweaty, blood stained dancefloors were more the norm than the unexpected.

Rogers owned the stage from the outset, his casual dance like swagger and gyrating hips almost more suited to the Toy Box further down the road, but somehow rhythmically captivating.

He had already brought out the maracas by mid song – which incidentally colour matched his sweat bands in a possible coincidence, but who believes in those any more?

After a messy end to the song – but it WAS the first show of a tour with a new singer – The Hard-Ons switched quickly into performance mode, tightening up the sound, and by the time Bad Bad Temper blasted through the speakers it was as though this line-up had been together from the start.

The on-stage chemistry, particularly between guitarist and founding member Blackie and Rogers, allowed for smooth transition between songs with between-song vocal banter surprisingly light on for the whole set.

The Hard-Ons instead let their music talk for them, peeling off new songs Hold Tight, Fucked Up Party, Light As A Feather and Humiliated/Humiliator throughout the night, each song fitting in seamlessly with the band’s back catalogue. By the third song – and I’m not sure if it was due to the incredible heat warming up the room or a beautifully choreographed moment – all four shirts came off like synchronized swimmers going into battle and the lighting came into play perfectly to dim the glow from the typically pasty white skin that seems to afflict all those who play a musical instrument.

Blackie dominated the set on guitar, his solos seeming more like elongated riffs and never competing for the spotlight which was shared equally among all four members.

Although at times Rogers came off a little too much like the moth-loving skin collector from Silence Of The Lambs, his performance only accentuated what we have known for four decades.

The Hard-Ons are one of the stiffest bands in Australian music history.

Hell, bass play and fellow founding member Ray Ahn is that punk, he licks his own armpits between songs!

Despite the fact that at times the band struggled to read their own set list (probably the lighting rather than aging eyes?) The Hard-Ons left the stage mission accomplished.

The near hour long set was more like an extended live jam between mates that was as entertaining as it was draining.

They say life begins at 40, and if that’s the case The Hard-Ons haven’t anywhere near reached their climax yet.

And thank fuck for that!

Before we go, I have to make mention of the freshly unveiled new section of Vinnies that has opened up the room considerably and heightened the enjoyment of live shows. The capacity has more than doubled with a massive stage and built-for-sound room, lifting Vinnies from a Dive Bar with potential (but still a great live venue) to a live music paradise perfectly suited to the Sunset Strip.

*Some tour dates have been changed due to COVID. Please check the updated tour poster below