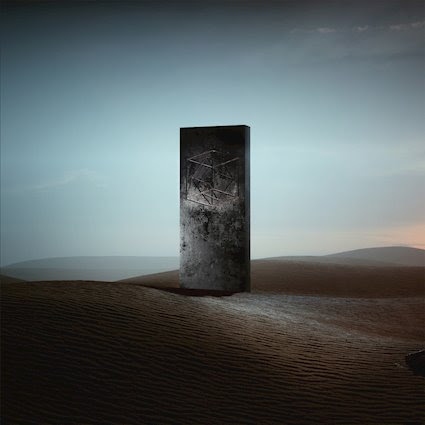 Tesseract, Portals … here we go, all 14 tracks of it. 18 if you count the 10-minute, wait 14- minute plus songs as two tracks. Who the hell even writes 14 tracks for an album these days? Well, these guys did. Let’s see where it takes me.

Of Matter launches into some instant math metal. Clean vocals take over and create some clarity amongst the confusion. This song clocks in at almost 15-minutes, but somehow never manages to lose your attention with its shifting time signatures and perplex arrangement.

High-end production creates an often-unheard clarity to the mix which surrounds your ear holes and cuddles your auditory senses. 7-minutes in and I’m enjoying the fact that I have enough time to type this before the song ends. This is some good prog, unlike that Tool garbage that everyone loses their shit over. Next …

King, of what? Prog? Yeah, it’s kind of looking that way, but this track’s only 6-minutes long, so I’m not sure that fits within the genre’s prerequisites. A very warped intro riff grabs my interest immediately, and this continues into a melodic verse. The song then backs off to some clean guitars before launching into a thumping broken time bridge, then back to the soft subtle cleans tones heard earlier. Detuned guitars and wobbly chord bends finish the song in a dooming outro.

The following track Concealing Fate comes to us in 3 parts even though it’s only 1 track, which makes completely no sense to me at all. It doesn’t need to though because it launches straight in with some heavy riffing and screams which is generally enough to keep me partially satisfied. I wonder if they’ll let me know when the second part starts because I’m 3 minutes in, and it feels like I’ve already been through about 6 different parts? Math metal riff after math metal riff pretty much sums up the journey so far if you throw in the odd symphonic and amp; melodic sampled interlude. Oh, a chord just rang out, and I think we may have just made it to part two, but if I continue this review like this it’s going to take the better part of 2000 words to complete. Anyway, the next parts, super heavy! Enjoy it in your own time!

I’ve just realised that if you’re a fan of Tesseract that you’ve probably heard all these songs before as this is the soundtrack for their previous live cinematic performance of the same name, PORTALS. Rookie error, I should have probably read the press release first, but who’s got time for that with a 2-hr, 2-CD album in front of you. Anyway, I’m confused, is this a live performance? The playing and production sound flawless, and if this is a live performance, I take my hat off to this band.

So, let me shift my focus to the video for Tourniquet and its red laser beams, red frickin’ laser beams. Lots of them, slowly burning, a bit like the track itself. This is definitely live, and absolutely flawless. And while I’d like to see a band move around a lot more in a live situation, it wouldn’t really make sense because this is a tune that requires complete concentration and focus.

Unfortunately, I’m only granted access to a single clip from the film rather than the whole 2- hour cinematic experience, which you now all fortunately have access to via Blu-Ray and DVD in multiple editions. The band will also bless you with a behind the scenes documentary as well as a some “Live in the Lockdown” footage. The limited edition deluxe 4-disc book edition also comes with the 2-CD Portals audio soundtrack, which I mistakeably started reviewing as an album of new songs, and a 40-page booklet containing exclusive pictures, liner notes and individually numbered art print. The soundtrack will also be available as a standalone item in 3LP Gatefold, 2-CD and Digital formats.

What a journey, and what a band. These guys just scored themselves a new fan, and I’m sure there will be much more of that to come with a concept and release of this magnitude.