Taming The Beast With JOE SATRIANI 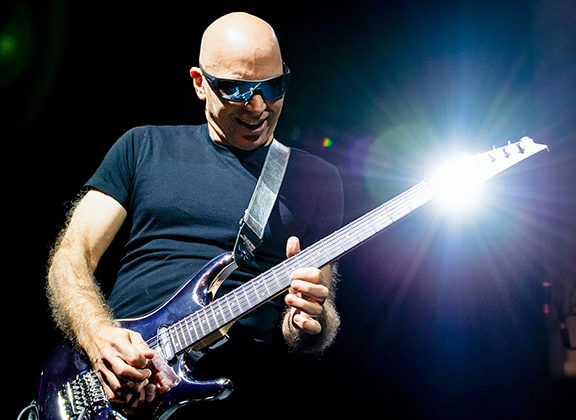 Joe Satriani has that rare ability to make his guitar sing.

His playing is revered the world over, matched only by his consistently high musical output and innovative and imaginative playing that has seen him release over 20 albums as a solo artist and with Chickenfoot.

Each release has seen Satriani achieve new levels of musicianship and maturity, allowing his guitar playing to form a life of its own in a world dominated by vocals.

Last week Satriani released The Elephants OF Mars, an album given impetus by lockdowns and isolations, which inevitably allowed him the musical scope and freedom to create an album more of his own fruition than any before.

It is an album that is as eclectic as it is mesmerizing, and one which encompasses Satriani like never before, from his guitar wizardry to his personal artwork on items available only as a pre-order.

Satriani sat down with HEAVY earlier this week to discuss The Elephants Of Mars and the process of making it.

“This is a crazy album,” he smiled. “Very eclectic, rockin’ and just all over the place stylistically. The title track will be out on video which is directed by my son ZZ. It’s definitely the craziest thing I have ever seen in my life so get ready for that.”

While some musicians struggled for inspiration during COVID Satriani embraced the darkness, allowing life and its constant ebbs and flows to provide the impetus for the new material.

“You know what it’s like,” he offered. “Life is crazy, you know. It just keeps coming at us and there’s so much that I feel like reflecting on musically. I’ve always been that way. I turned all kinds of observations, daydreams, and crazy intellectual jaunts and average everyday music into music and art. It’s just the way I’ve always done it. Sometimes I write about just feeling good. There’s a song called Blue Foot Groovy on the album, and it’s just a really upbeat, I feel good kind of song and then there are songs that are really weird, like Sailing The Seas Of Ganymede and The Elephants Of Mars. And there are songs that are sad about some dark subjects like Faceless or Desolation. I usually cover all of it because that’s what life is like. You never know what’s coming.”

Satriani has been quoted as saying that with The Elephants Of Mars he wanted to create a “new standard” for instrumental guitar albums to be measured against, and expanded on that statement by saying “I was thinking about my whole catalogue and I thought I need to up my own game and put out an album that I would think as my best ever for today. I wanted to write better. I wanted to play better; arrange better. I wanted more interesting things to happen on the record. Sonically, I wanted it to be more cohesive than anything I’ve done before. It wasn’t lost on me that I’ve been around for a long time and put out a lot of albums and I really didn’t need to introduce myself or explain myself as a guitar player, so I thought I should stop any hint of demonstrating. I should just leave that to young people on Instagram who are trying to make a name for themselves. That’s what I would do if I was 15, and I could shred, I’d be doing that every day (laughs). They’re doing the right thing, but that’s not what I should be doing. I should be perfecting my voice as a musician, as a soloist, as a writer, so I got busy. It was like I was challenging myself.”

In the full interview, Joe talks more about The Elephants Of Mars, the different moods created on the album, the meaning behind the title, the album artwork, coming up with song titles without lyrics for inspiration, the special additions to the pre-orders, future plans and more.