ST.SINNER ‘Politics And Other Drugs’ 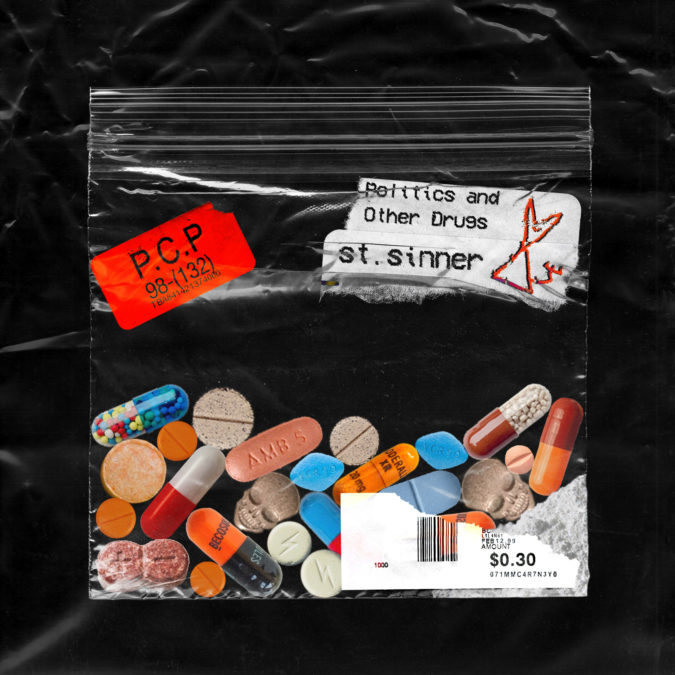 Me neither, so thank Christ (or whoever) that st.sinner is here to remind us with their six track E.P Politics and Other Drugs.

These self proclaimed ‘indie punk legends’ from New South Wales want your attention, and they want it now. Starting with singer and all round ringleader Rory Maclean and his hair, perhaps the most convincing frontman for a Prodigy cover band that never was. His sidekicks The Revelators, who make up the rest of the band, may have mostly steered clear of the hair dye aisle at Chemist Warehouse, but that hasn’t stopped them looking like punk ‘legends’.

But of course, all this is about as relevant as Tim Paines wedding vows if the music doesn’t stack up. Thankfully, Power doesn’t fuck about in announcing its intention to entertain. A spoken word intro declares, “You are no longer relevant. You are no longer in control. Power to the people, the future is ours…”.

So far, so serious. But then the music begins, Flash Gordon vocals hark behind the drums, the riff kicks in and st.sinner are off! The lead vocal begins and while the tone and the lyrics may very well be punk, the sound has an infectious, almost pop, bounce to it. The chorus bellows “We got the power” and Rory sounds like he means it. All of this plays out again before arriving at one of my favourite musical moments of 2021.

After an impressive rant detailing the irrelevance of Scomo and co. a chant of Na na, na-nanna-na-nah breaks out and you can feel every nose within reach being thumbed at the establishment. It’s a brilliantly timed and executed piece of musical mockery.

Danger drops in next and keeps the party going by sounding how Buckcherry would if they grew up playing the Dapto R.S.L, in the very best possible way. It is a terrific way to spend three minutes and this time around the earworm ‘na-na-nah-nahs’ are replaced by ‘whoa-whoas’ and yup somehow just as catchy.

Third cab off the rank is another warranted potshot at the pollies going by the name of Mr. Prime Minister. A fast-paced ska workout reminiscent of The Cat Empire if they had to let 12 band members go due to social distancing. And fuck me dead if the whoas and nahs aren’t substituted for ‘la-la-la’s’ this time, brilliant.

We’re All Going To Hell continues the ska and la’s but this time more from the Madness empire than the Cat one. And at times sounds like the deranged soundtrack for a Rob Zombie show ride. It really is as mad as a bucket full of clown cocks, but because these lads have a knack for not allowing a song to ever out stay its welcome, it works.

Dead For The Weekend stays in the same lane as the previous two tracks but adds ‘oh-oh-oh’s’ to the whoas, nah’s and lah’s, thus maintaining the party mood, ignoring (or not) the sweet irony of that on a song about addiction.

Then sadly and all too soon we arrive at the album’s last song Faking.

A song that shows st.sinner doesn’t always need to mask a message in feel good, crowd pleasing music. No, this time around the message is front and centre and accompanied by seriously well suited more, dare I say it, mature music. Even the ‘whoa’s’ are more grown up but still seriously catchy. This song may be the slowest on offer here, but it is arguably the most powerful and shows that some real songwriting talent resides amongst this lot.

Politics and Other Drugs is worthy of attention, and st.sinner deserves every success based on what they have created.