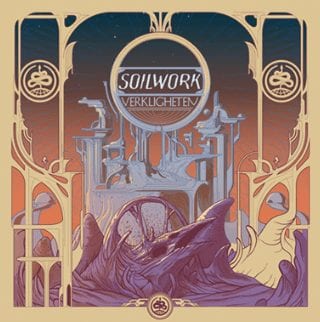 The late ‘90’s were a very important time time in metal. It was a period back in time when the most important country to export all things containing heavy ear candy was Sweden. The list of bands and their importance and contribution to what would change the face of metal is long, but, one of those important bands is Soilwork and the debut album was The Steelbath Suicide (1998). Both Soilwork and Steelbath was one of those bands and a magnificent debut album that rewrote the manual on how to construct ten or more near perfect metal songs for each and every succeeding album, almost anthemic in their design and deliverance. Steelbath Suicide was released twenty years ago and like their peers in In Flames and their debut Lunar Strain (1994), Opeth’s My Arms Your Hearse (1998) or Meshuggahs’ groundbreaking None (1994) EP and it would be remiss of me not to include in this list of sheer magnificence one of the greatest and most influential Swedish melodic death metal albums of our time, Slaughter Of The Soul (1995) from the mighty At The Gates.

Considering the above list for a moment. Soilwork were (and still are for that matter!) one of the only bands that never once strayed from the path they paved for themselves. In fact, Soilwork remain as pissed off and angry in 2019 as they were back in 1998.

Album number twelve Verkligheten, Soilwork are as passionate, angry, passionate and relevant now as they have ever been. If not more so!

‘Verkligheten’ is the Swedish word for reality. And in the words of the albums press release: “the entity that we’re all trying to escape from. Verkligheten is our attempt to try and go somewhere else, to express all those things that are born in between hypnagogic states and frenzies of hyperrealism. Verkligheten is the otherworldliness of Swedish suburban anxiety, accompanied by blastbeats and slide guitars…”

Opening with the instrumental title track, which is a calming almost country tune. Sombre and soothing in its prelude we the listener are placated enough to be pummeled by track number two “Arrival”. Launching in with blastbeats courtesy of new drummer  Bastian Thusgaard and sweeping keyboards and guitars featuring Sven Karlsson (keyboards), Sylvain Coudret (guitar) and David Andersson (guitar), heavy Swedish melo death ecstasy hits when we hear again that voice of Björn “Speed” Strid. “Arrival” has all the elements to prepare us for the onslaught of Verkligheten’s inner complexities. “Bleeder Despoiler” is a straight up head nodding heavy rockin’ tune for the verses and chorus o’clock drops tempo for the now signature anthemic style and approach that we know Soilwork so well for.

Track Three, “Full Moon Shoals” starts off slow with a quiet strum of guitars and a nice duel heavy and melodic vocal duet trade off. All the while a distinct double kick pulses the song along towards the…yepp you guessed it! Anthemic chorus. And it works just as well here as it does for all previous Soilwork songs. But halfway in, the song becomes this tyrant of machine gun guitar blitzkrieg and snare stabs that launches”Full Moon Shoals” from a quiet unassuming beast to an all out armageddon Death n’ Roll  war machine. It’s fucking awesome. And Björn launches a venomous guttural tyrade for a mere brief moment ending the all too quick brutal moment leading the song to its end.

And into familiar territory Verkligheten continues for eight more great songs. Typical of what we know and love Soilwork for. It’s a really good and solid offering from the Swede’s that will keep you entertained, grateful for new material to sing along to and move your heads in unison with them when their Australian tour rolls around in March.
Make no mistake, there is nothing groundbreaking to be heard here, but does that really matter readers? NOPE! Soilwork do what they do well and that is that they Write a dichotomy of melodic angry metal songs that scratch a particular itch when nothing else will.

Definite highlights  on the album are “When The Universe Spoke” and its all round brutalness. And then there’s the first single/video release “Stålfågel” which has some of the best galloping, chugging guitar that would make Iron Maiden proud. And of course features the Soilwork signature anthemic crowd chanting perfection.

Verkligheten is out on 11th January via Nuclear Blast