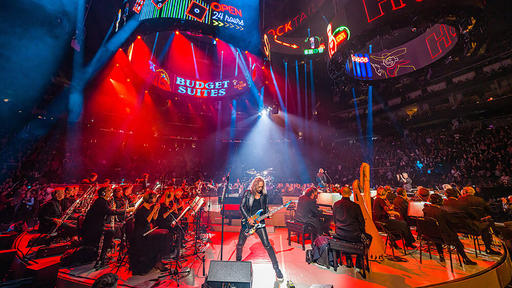 When it comes to feats in the music world you would have to say that Metallica have been there and done that when it comes to most things. One of those feats was the 1999 album S&M. Sure other bands had recorded with orchestras, it was nothing new, but when Metallica teamed up with the San Francisco Symphony a special kind of magic happened. That magic led to one of the greatest live albums ever recorded.

With that feat already well and truly conquered by Metallica it came as quite a surprise when 20 years later Metallica and SFS were teaming up to do it again. Why would the band want to repeat something that they had already done and conquered? Well it seems that the band and the Symphony though they could do it even better the second time around… and yes I have to admit that somehow this collaboration has even topped the perfection that we had in the past.

Love ‘em or hate’em you have to admit that Metallica are a band that know how to rise to an occasion and here they reach a height that they have arguably never reached before. Maybe I am imagining it but it feels that with S&M2 there is an even greater collaboration between the bands and the San Francisco Symphony. Again maybe I am imagining it but somehow the Symphony’s work here seems stronger and more prominent.

Under the watchful eye of music director Michael Tilson Thomas and conductor Edwin Outwin the orchestra manage to match Metallica at every level… and that is saying something because this has to be one of the greatest concerts that have ever performed. They had fans from all over the world descend on the Chase Center in San Francisco and the band made the journey worth it.

For those lucky enough to be watching the DVD of the concert the first thing you will notice is the beautiful way it is shot. This is right up there with the brilliance of Martin Scorsese bring The Rolling Stones to the screen. Here director Wayne Isham, who has worked with everybody from Billy Joel to Pink Floyd, does not miss a single thing. He captures nods and winks between band and orchestra and such is the camera shots that he chose to use it feels like you are one of the lucky ones there on the night. At times he even uses multi-screen so you don’t miss a single thing going on.

Musically S&M2 is perfect. The night kicks off with an extrended opening from the Orchestra delivering “The Ecstasy of Gold” and “The Call Of Ktulu” before being  joined by Metallica in an orchestra-led version of “For Whom The Bell Tolls.”

Of course fans are not going to be disappointed as the band delivers all their hits – “Enter Sandman,” “Nothing Else Matters” and a version of “Master Of Puppets” that is lifted not only by the orchestra but by an audience in full flight. It reaches such an epic height I’m surprised that the roof didn’t come off the venue.

The highlights here though are the amazing performance of The Scythian Suite that has made me want to delve into my history books and performances of “The Outlaw Torn,” “All Within My Hands” and “Wherever I May Roam” which see James Hetfield at his haunting best.

Say whatever you like about Metallica but S&M2 is a DVD of sheer perfection. Classical music meets heavy metal full on and the result is something that the audience will never forget. It loses nothing being viewed at home and this is a must have for music fans far and wide.