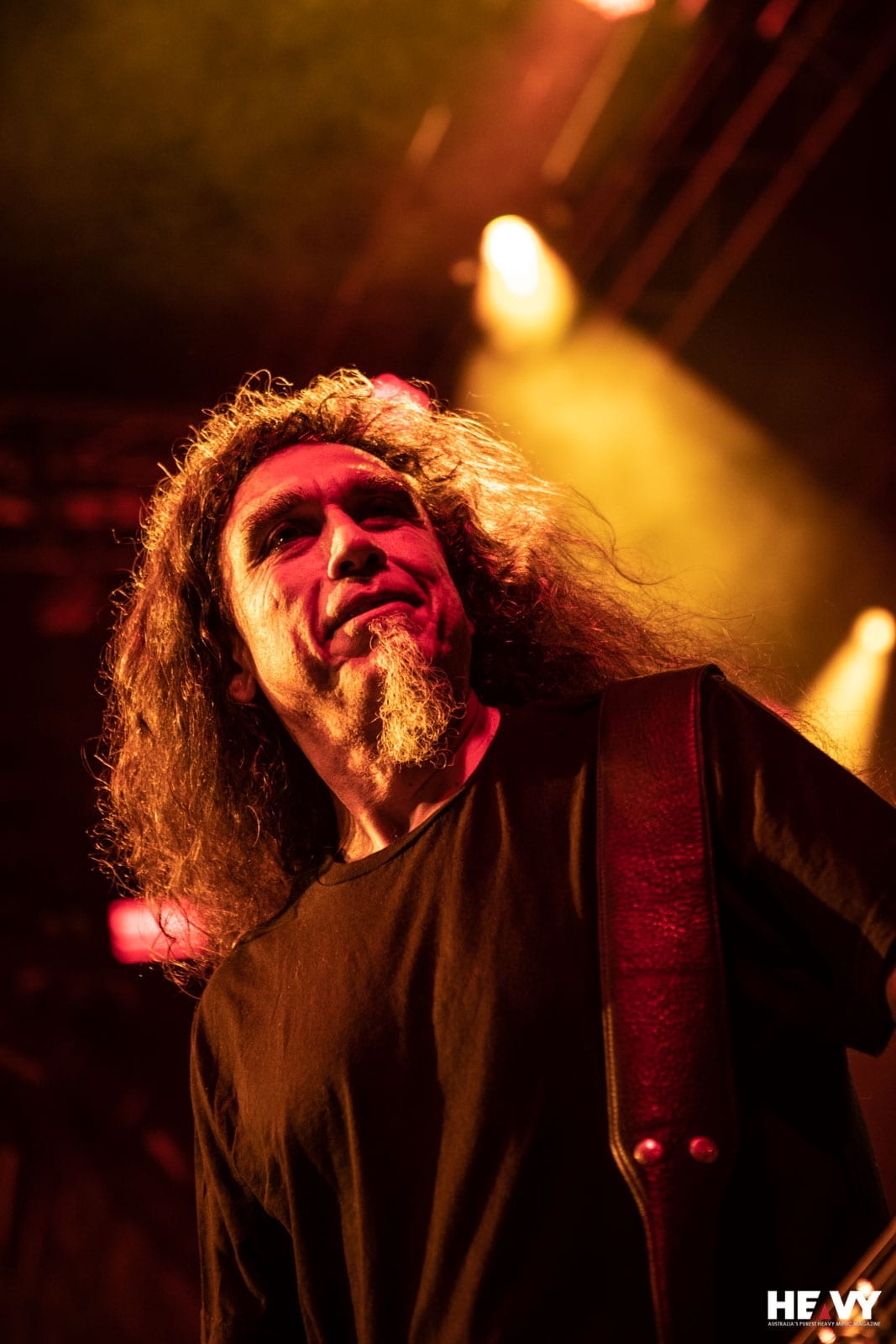 SLAYER and ANTHRAX at Riverstage, Brisbane on 07/03/19

Not even the ever-present threat of rain could keep the Brisbane fans away from Slayer‘s only show outside of Download at Brisbane’s Riverstage on Thursday night.

The thrash metal heavyweights are pulling the curtain on an illustrious career and brought their Final World Tour to our shores as part of celebrations/commiserations, bringing with them fellow servants Behemoth and Anthrax. 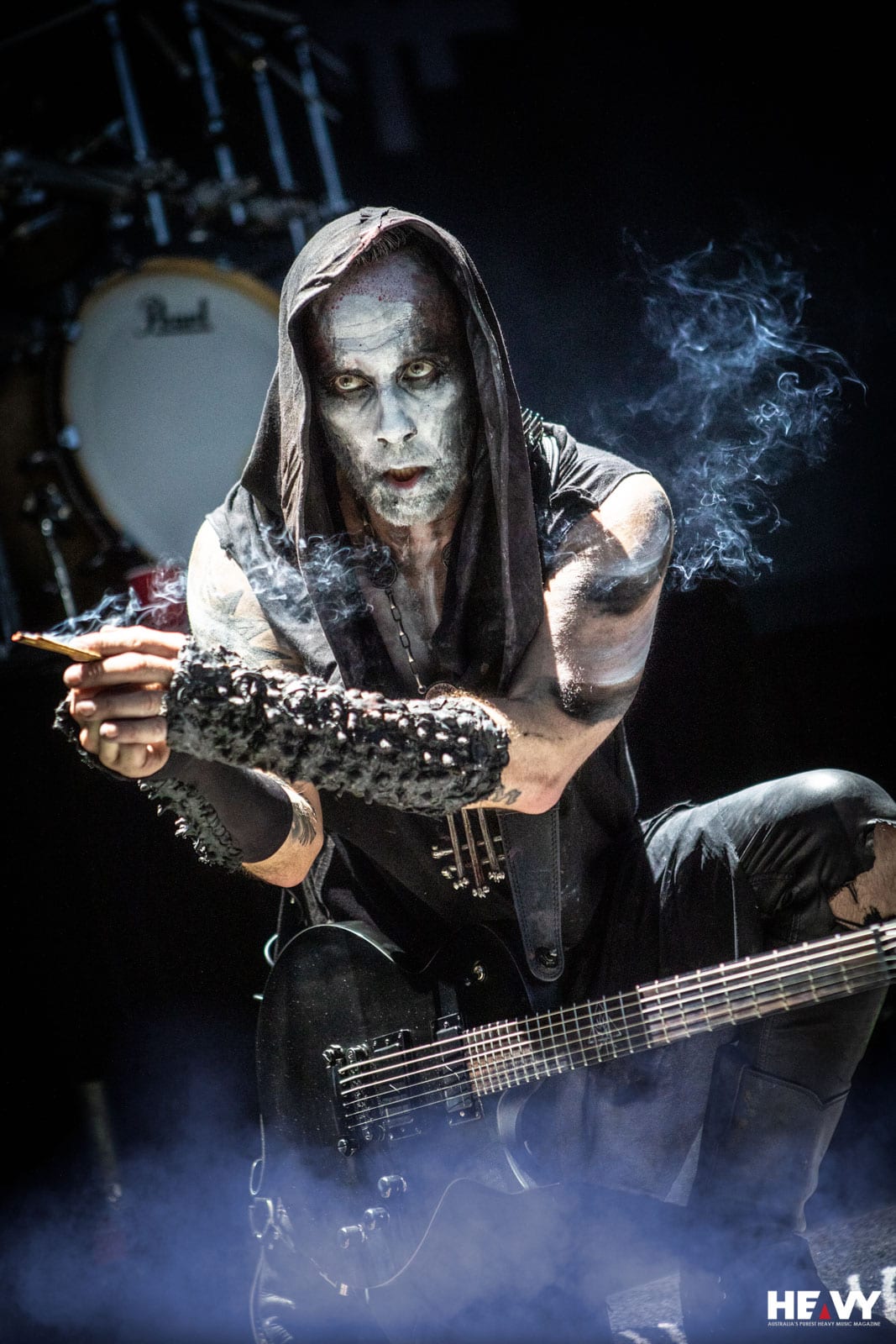 Unfortunately – and back me up here – I missed Behemoth largely due to the fact that I timed my arrival for around the same time the sun went down. Aside from festivals, I have never been to a metal show while the surveyors of daylight still inhabit the Earth, so thinking this unwritten rule of Metal would be adhered to it came as a shock to find I had missed the first act. Sorry guys, but I’m only going to take part of the blame for that.

The large stage was just being cleared for Anthrax as I settled into my patch of dirt on the grassy knoll and the magnitude of the Riverstage started to fully set in. It is a fantastic venue for live music – as long as the rain stays away – and the layout of the viewing area is such that you can have a clear view of the stage from almost anywhere. I was surprised to see the lack of big screens adorning the side stage given the distance from the stage to the back of the crowd but I was pretty close so it wasn’t really an issue for me.

Iron Maiden’s ‘Number Of The Beast’ gave the first signs that change was imminent, but when the stage lights went on and Anthrax opened with ‘Cowboys From Hell’ you just knew there was something special brewing.

Joey Belladonna immediately set about asserting his authority, pacing the stage and making eye contact with as many people as possible and when Scott Ian went into the initial stages of his familiar stage dance the crowd rose as one. 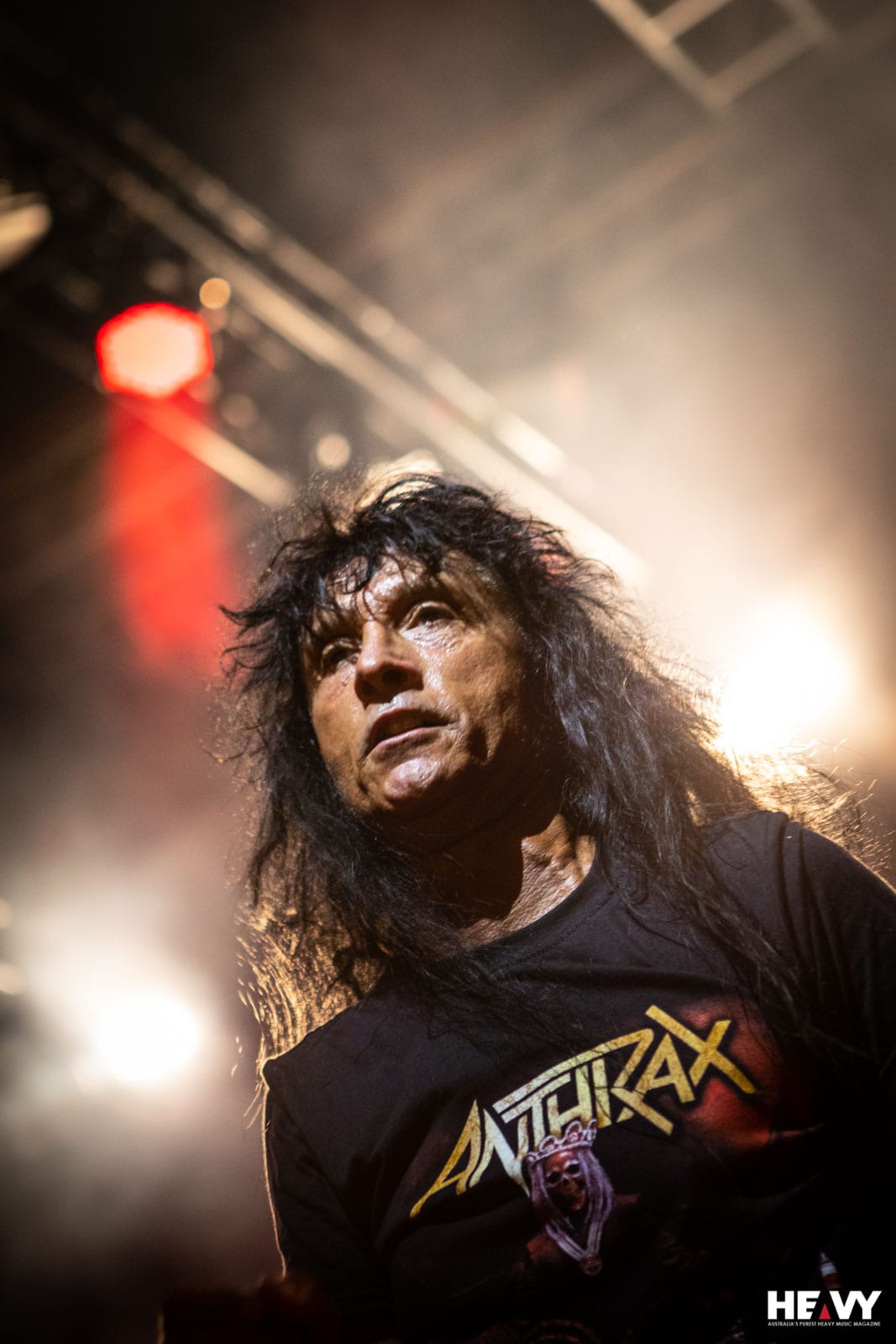 Charlie Benante, resplendent on his kit perched centre stage, revelled in the freedom and laid the platform for a typically aggressive set. Seemingly content to act as support, the band tore through an eight-song trip down memory lane, highlighted by ‘Antisocial’ and ‘Got The Time’ but peppered with classics such as ‘Caught In A Mosh’, ‘I Am The Law’ and the more recent ‘Evil Twin’.

Guitarist Scott Ian continues to defy Father time and acts as almost a second frontman in the way he harnesses the crowd’s energy and distributes it amongst his bandmates. His youthful exuberance is as infectious as it is entertaining and his personal gee up of the crowd towards the end of the set only served to awaken the weary. 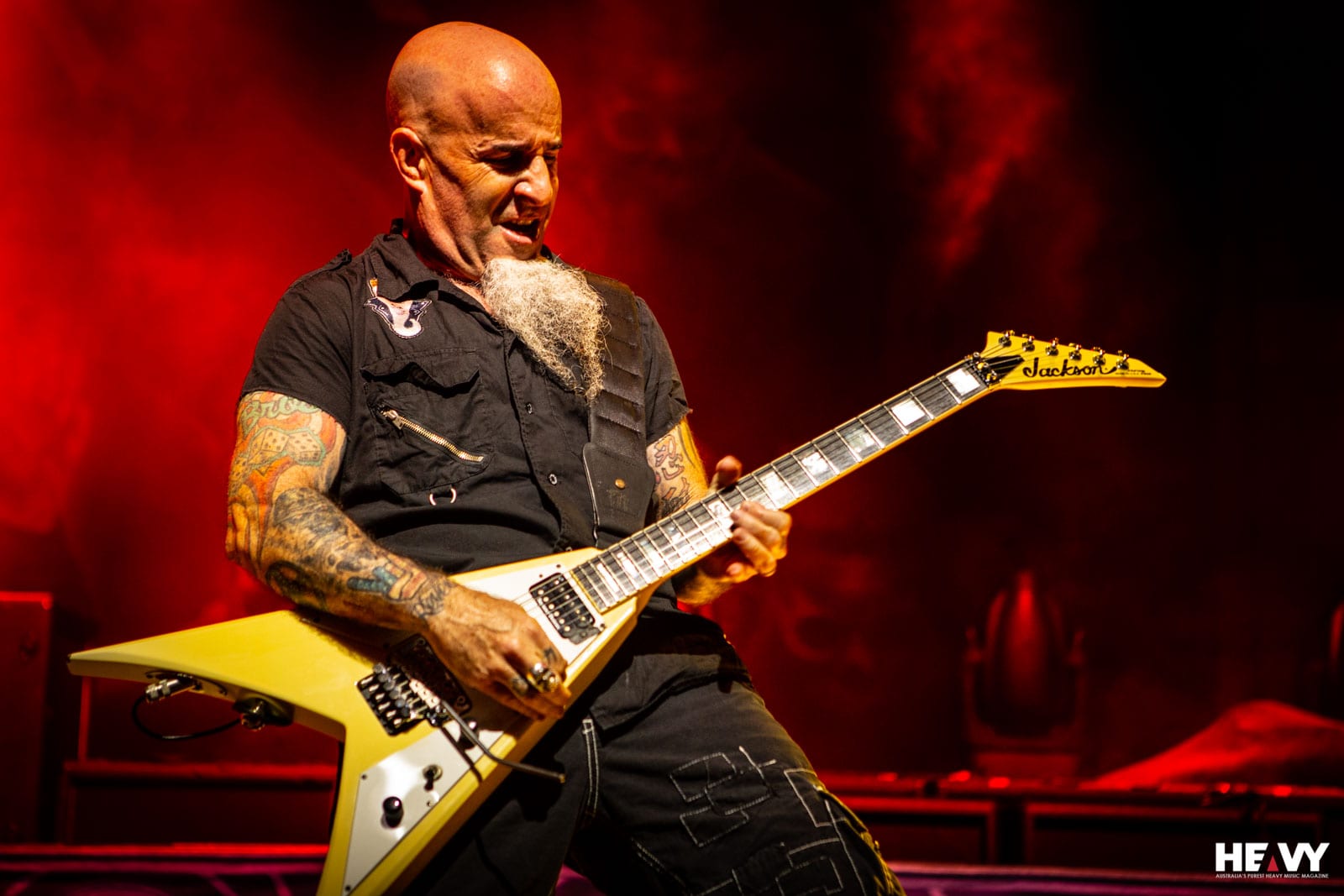 Belladonna summed it up best when he proudly declared “it’s all about the metal” and judging from the crowd response they agreed emphatically. There is yet to be any whispers of the impending sign off date for Anthrax and if tonight’s performance is anything to go by there is much life left in their thrash legs.

It feels almost sacrilegious to say that Anthrax were the appetisers for the main event but when said headliners are Slayer things fall more into perspective.

There was a palpable tension over the crowd as the curtain fell down and Slayer’s stage was assembled, but despite the underlying sense of foreboding, there was also a sense of belonging that seemed to link each person to their neighbour.

It was as though the mixture of emotions generated by witnessing Slayer’s farewell performance, the exhilaration of actually being there for it, and the general sense of impending carnage that punctuates any Slayer show all mixed together to provide a strangely comforting feeling of contentment.

As the lights dimmed and the pre-show visuals kicked into gear any trepidation was cast aside as the crowd swarmed the stage, jostling for that last intimate moment with their idols.

Pentagrams and inverted crosses danced over the curtain before the first of many engaging pyrotechnics outbursts torched the night and Slayer launched into ‘Repentless’. That title set the tone for the remainder of the show, with Tom Araya barking out lyrics like a general orders his troops into battle. Without pausing for breath they ripped through ‘Blood Red’, ‘Disciple’ and ‘Mandatory Suicide’ with Kerry King attacking his guitar relentlessly with unbridled aggression and malice.

A Slayer concert has always been a lesson in controlled aggression, with the machine gun like precision of their songs outshone only by the band’s refusal to take a backward step.

When the spotlight centred on Araya centre stage it seemed like it was time for the obligatory farewell speech but he simply stood there, smiling broadly, taking stock of the world Slayer has created. It was a touching moment where the audience and vocalist connected as one, with the general message being one of gratitude, respect and accomplishment.

There was no time for sorrow or regret, with the music placed firmly where it should be – at the forefront of proceedings.
Playing songs from ten of their fourteen studio albums, Slayer did their best to appease fans from their entire history, with each song acting like a call of arms to the Slayer family.

Ripping through ‘Black Magic’, ‘Postmortem’, ‘Seasons In The Abyss’ and ‘Born Of fire’, each song led one step closer to the inevitable conclusion and by the time the first notes of ‘Hell Awaits’ pierced the air you could sense Slayer would be going out with anything but a whimper.

They even enlisted the help of the metal Gods who gradually let the skies open during ‘South Of Heaven’ and by the time the familiar chords of ‘Reign In Blood’ thundered through the Earth the skies opened wide and Slayer proved to all in attendance their place among the immortal.

Closing with ‘Chemical Warfare’ and ‘Angel Of Death’ Slayer shared one last prolonged moment with their fans, spreading out across the stage and showing their individual respects to anyone within earshot.

You didn’t have to hear Belladonna’s voice to get the message, as he stood for a full five minutes gazing over the crowd in a moment of silent gratitude that said more than words ever could.

Tonight was not only a celebration of an illustrious metal career but also a reflection and reminder on why, as a musical force, Slayer will probably never be equalled let alone bettered. They have grown old disgracefully and happily taken each one of their fans on the journey with them.

PrevPrevious.SLAYER and Anthrax at The Riverstage, Brisbane on 7/3/19
Next.ANAAL NATHRAKH and Hybrid Nightmares at Max Watts, Melbourne on 08/03/19Next