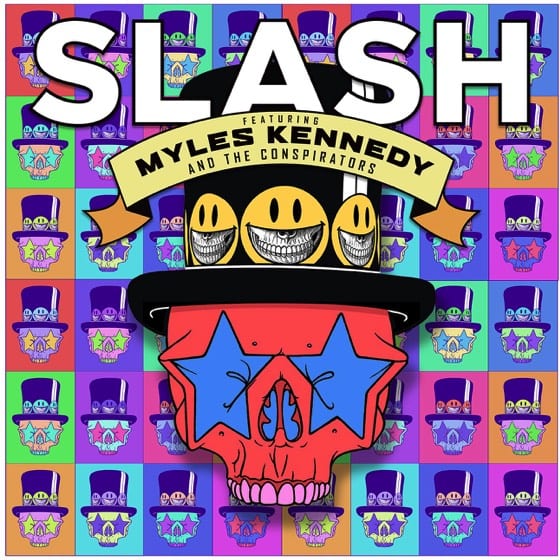 The Midas touch of Slash and Myles Kennedy is no secret. Like two talismans that were destined to be paired together to create a mystical musical forcefield, the marrying of Slash’s nastily dirty groove with Kennedy’s distinctive blues-steeped howls and sneers has returned to create a third album of invincible prestige.

Opening with a rhythmically jittering riff that escalates into an unabashed fever of instrumentation, first track “The Call Of The Wild” provides sweet reminder of the provocatively swift-running tracks on the clan’s previous albums like “Shadow Life” and “One Last Thrill”. In actuality, Living The Dream is riddled with haunts of antecedents World On Fire and Apocalyptic Love, with the tenderly angelic “The One You Loved Is Gone” and the obnoxiously unapologetic “Driving Rain” echoing portions of “Battleground” and “Standing In The Sun”. Meanwhile, “Serve You Right” is a thematic hearken to World On Fire’s “The Unholy”, lyrically hinting at religious corruption via a helping of infectiously juicy sleaze.

Living The Dream is very much an album of yin and yang, tussling with light and dark and darting in and out of the eye of the storm. “My Antidote” cavorts with a happy-go-lucky choral jive yet also judders with a lead-heavy, ricocheting riff alongside urgent percussion from Brent Fitz that plunges the track into the fiery shadows of Hell’s most cavernous chambers. Meanwhile, the aforementioned, acoustically pure “The One You Loved Is Gone” hovers with a soothing aura that is bolstered by Todd Kerns’ muscular bass.

Whilst Living The Dream bursts with erratic sunshine on the most part, slow rockers will find pleasure in “The Great Pretender”, which incorporates stately yet lullabaic guitar and vocals that Kennedy wrenches from the depth of his soul with silky prowess. “Lost Inside The Girl” sways with an understated eerieness that fails to grip the listener as powerfully as the other tracks at first, but is a number that requires thoughtful attention to gage full recognition as a triumph.

An album gilded with the confident mastery of some of rock’n’roll’s finest virtuosos, Living The Dream is a welcome branch to the ever-expanding legacy of Slash and Kennedy.

PrevPrevious.Film Review: Teen Titans Go! To The Movies
Next.THERION At The Manning Bar, Sydney On 14/09/18Next