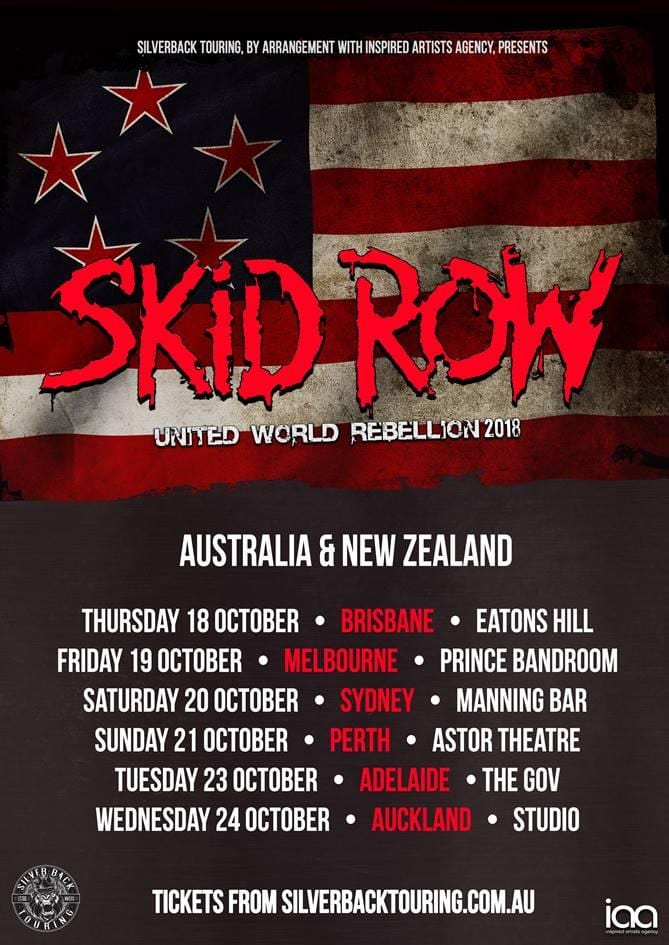 Multi-platinum selling band SKID ROW will embark on a full Australian tour this October whilst also hitting Auckland New Zealand. It will be the first time Australian fans get to see former Dragonforce singer ZP Theart up front and he will be joined by guitarists Snake Sabo & Scotti Hill, bassist Rachel Bolan and drummer Rob Hammersmith!

Skid Row started in 1986 when a group of New Jersey kids, armed with their punk and metal attitude, and a collection of riff-heavy, high-octane songs, set out to conquer the world, one concert at a time. This determined and focused approach proved to be an unquestionable success, as the group went on to clock up numerous Top Ten singles, Gold and multi-Platinum selling albums and a Number 1 on the Billboard album chart. In other words, the world was theirs.

They might have conquered the world several times over, but guitarist Snake Sabo admits the success hasn’t changed him or the band, and Skid Row are focused on making more earth shattering music. He says: “I will always be that 16-year-old kid in front of the mirror, pretending to be Ace Frehley or Michael Schenker. It’s still about writing a great song with your friends, praying it connects with someone. That has never left me. That willfulness will always exist, and there’s so much left to say!”

Now, SKID ROW is gearing up to record the final instalment of the United World Rebellion trilogy. Recording new songs means capturing the signature SKID ROW energy for drummer Rob Hammersmith. “That sound and energy is what resonates with people and knocks them on their ass! We have a lot of great ideas to work with, so we’re all really excited about this new music.”

As the energy for the new album and tour is reaching fever pitch, enter ZP Theart. “I’ve been a mad fan of this band since I was a teenager, and to now be a member of SKID ROW, is beyond any sense of my imagination!”

The Fever Pitch is sure to be reached as SKID ROW unleash all that energy and hit Australia and NZ this October!