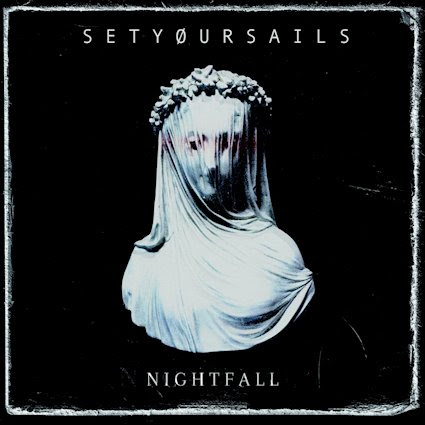 Young, enraged and wielding steadfast statements against racism, sexism and homophobia. Fuck me, doesn’t this just sound like one hell of a good time. Let me not dismiss this band instantly though because I’m sick of hearing everyone’s socio-political opinions and wish that you’d all just shut the fuck-up, play some music, and get on just respecting each other, and each other’s opinions, as earth sharing human beings. Well, if those particular human
beings deserve the respect that is.

So, does SETYØURSAILS deserve our respect? Let’s see, shall we. Let’s see what their sophomore release Nightfall has to offer.

An electronic intro with heavy background guitars and pounding drums sets the tone for the opening track Ghosts to take us on a short symphonic metal journey which soon turns into a rocking, heavy tune. The screams in this song are brutal, and I’d tell you who is responsible for them, but in the latest trend in the music industry it seems that every band in the world has removed their band members names from their webpages and social media.

Now, without mincing my genders, pronouns, and possibly offending someone, I’m going to take a guess and say that this is a female vocalist. The melodic sections would further lead me to believe this. Oh wait, I just found her name, it’s Jules, and it turns out she is also joined on this track by Rudi Schwarzer of Annisokay. Anyway, it’s a massive track full of melodic and heavy groove.

Wow, the Limp Bizkit track you’ve all been waiting for. Wait, what, it’s not? But anyone would swear Wes Borland wrote the into riff to Nightfall. The track takes us on a completely different journey to any mighty Bizkit song you’ve ever heard though as it weaves in and out of slow melodic verses, bouncing bridges and rocking choruses. The track brings back the riff a couple of times, and we hear some guest vocals by Andreas Dorner of Caliban.

Secrets is the first slow burner on the album, and it flawlessly shifts between slow verses, slightly rockier bridges and heavy choruses. It’s a massive track, even in the quieter sections. The production is on point and does the songwriting the justice it needs to carry through into an interlude and into one of the heaviest, slowest and shortest breakdowns that I think I’ve ever heard. This track is almost pretty enough to make it on mainstream radio, almost.

A quick lo-fi guitar riff introduces us to Why, a seriously rocking track with heavy verses and soaring choruses. Nothing in particular really stands out about this track, but so far, it’s a standout. Maybe it’s the simple composition, or possibly those big breakdowns which takeover in the second half of the track.

Mirror follows suit with a rocking groove. This track bounces really well, and holds up a continuous groove which really locks you in. Another massive soaring chorus breaks up the groove but grabs the attention it deserves. Big song, probably why it was their first single and video from the album.

Into the Storm picks up the pace a little as it slots into the Metalcore side of things. In a surprise twist it shifts tone for the bridges and choruses where we hear the melodic side of the band again with clean vocals and accompanying keys. Although this album is so far filled with electronic undertones, they seem to push through a little harder through this track as the keys carry a constant melody throughout.

We get another slow burner intro into Anchor. It does build to a melodic rocker though, which is full of emotional vocal performances and heavy grooving riffs. Another big song!

This is a really enjoyable album, and while I’d love to continue on a track-by-track breakdown of it all I’ve got a few albums to review today, and I reckon this album deserves your personal listening time and attention. So, we are at track 8 with Forgive Me, which is followed by Deadline and What’s Wrong. These tracks slot in with the earlier tracks Secrets and Into the Storm as they show off the more melodic side of the band.

Reason and Fckoff take us back to the heavier side of the band with rocking heavy riffs. Reason reaches its peak with those soaring choruses we’ve heard throughout the rest of the album, while Fckoff just maintains ferocious brutality throughout the whole track. I mean, how else are you going to deliver a track tiled Fckoff apart from screaming Fuck Off over and over again.

The final track is a cover of Shallow (from A Star Is Born) by Lady Gaga and Bradley Cooper. Mike Perez from No Bragging Rights joins Jules to deliver the male component of the vocal performance while the band delivers a heavy version of the track. Massive track to cover in a very bold manner. This could be a massive attention grabber for this ban!