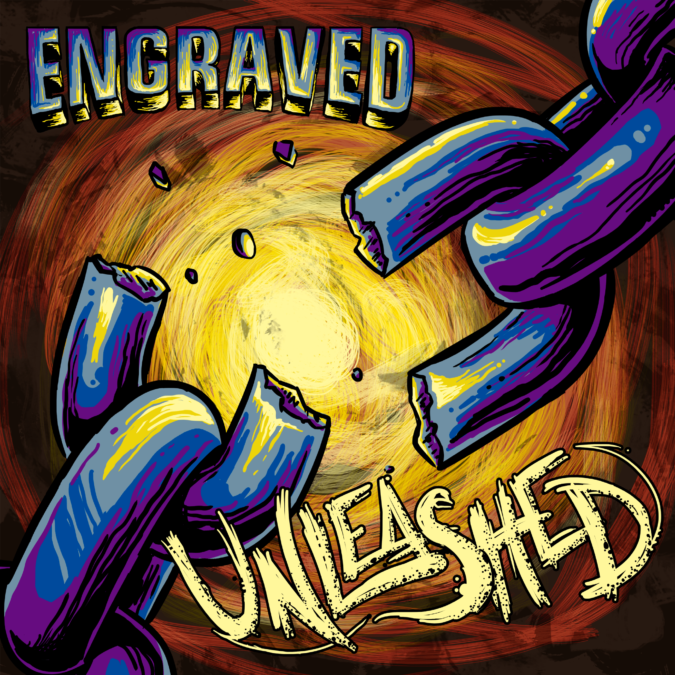 Debut releases from a band generally go one of two ways.

They are either full of promise but still a little rough around the edges, or they are a welcome breath of fresh air from a band still young enough to not give a fuck and still green enough to think that their way is the right and only way.

So it is with a sense of excitement and pride that I settle in for the debut EP from Sydney metalcore outfit Engraved.

Excitement because I was lucky enough to see Engraved’s first ever live performance last year, and they blew me away, and pride because the band’s bass player Phillip Capewell is one of my best mates and was a member of one of the first bands I ever managed, Salacious.

Now, don’t expect the above factors to make it a certainty that I am going to be glowing in my appraisal of this release, because those who know me well (and maybe not even so well) know that if I think something is shit, I will say it, no matter how close of a friend that person is (or was in some occasion’s haha).

Opening track Innocent Minds starts with gentle enough guitars before the vocals of Julio Criscolo kick in, immediately highlighting the diversity and talent at the bands’ disposal.

If I didn’t know otherwise, I would have fucked this up already by alluding to the twin vocals out front, with the transition between clean and harsh vocals seamless and staggered enough to wrongly suggest the use of two different vocalists.

Hailing from Brazil, this is actually Criscolo’s first ever touring band, not that you could tell.

The guy hardly even speaks English, so fuck knows how he will be able to tell stage divers to refrain from their basic human right or overly aggressive moshers to calm the fuck down…

Guitarists Anderson Duschek and Daniel Varvarian waste no time showing off their considerable wares, while the frenetic drumming from John Fogarty sets the standard for which the rest of the EP might find difficult to sustain.

Lead single Follow Your Idol explodes next, with an eclectic drum intro and stuttering guitar screams giving way to a fast-paced tune that chops and changes more than most politicians.

The use of the dual vocal styles is an early feature of Engraved’s music, with the harsh back-up’s offered by Duschek providing an extra layer of hostility that is punctuated only by polished cleans that bridge the gap between the forces of good and evil.

A nice guitar interlude that rises and falls with destructive ease gives an almost Tom Morello style feel to the guitar play that forms the basis for a hectic track that leaves me needing to crack open another beer before moving on to Gold Lives.

For a band in their infancy, Engraved have already learned the subtle, yet vitally important, trick that with music often less is more.

They know when to let the song breath without an over emphasis on technicality and fancy fills, making the moments when the instruments take charge even more poignant and noticeable.

Gold Lives is another aggressive slab of metal, more rooted in the heavier side of things than the previous two songs by virtue of a reduced emphasis on the cleaner side of singing.

The harsh vocals are an undoubted highlight of Engraved’s sound, with Criscolo’s cleans good enough to provide the dynamics but, in all honesty, with more than a little wiggle room for growth.

Not that they are bad. It’s just the harsh vocals are that good, it accentuates the disparity that often exists when a vocalist tackles both roles on their own.

Like A Shadow starts with a nice little bass twang – I think Phil must have known I would have to mention him in doing so – before pulsating to being with a wall of sonic intensity that again reverts to the harsh/clean vocal delivery that epitomizes the band’s chosen genre.

The most pleasing aspect about Unleashed thus far is the band’s failure to adhere strictly to the usual ifitaintbrokedon’tfixit philosophy that sees many bands churn out songs of similar scope and intensity because they feel safe in doing what they know works.

Engraved have showed enough experimentation and sonic diversity already to suggest these guys will continue to evolve naturally until some label wanker decides to mould them into their next musical pet – not that an overprotective ally such as my good self would ever allow that to happen.

Final track Unleash Me roars to life courtesy of blistering guitar work and strikes me more as a rock number than the previous four songs.

That is, until Criscolo destroys the ambience by barking into the microphone and rightfully putting me back in my place.

Again, this song is different musically to the rest of the EP, finding the unusual, yet effective, balance between almost radio friendly rock and radio unfriendly metal in one convoluted but tidy offering that ebbs and flows like the seasons, throwing up timing and tempo changes and even a hint of orchestrated gang vocals.

Unleashed is an extremely solid first slab of musical goodness from a young band that has dared to gather all of their influences but spin them in such a way to make the rejuvenated product something more of their own undertaking.

Oh yeah, the bass playing isn’t too bad either.

Check out Unleashed on Spotify here https://open.spotify.com/artist/6R5sDWirfGj3i7FpTw2A3W and listen to lead single Follow Your Idol and the rest of the EP here https://youtu.be/lfnqs_aIp24