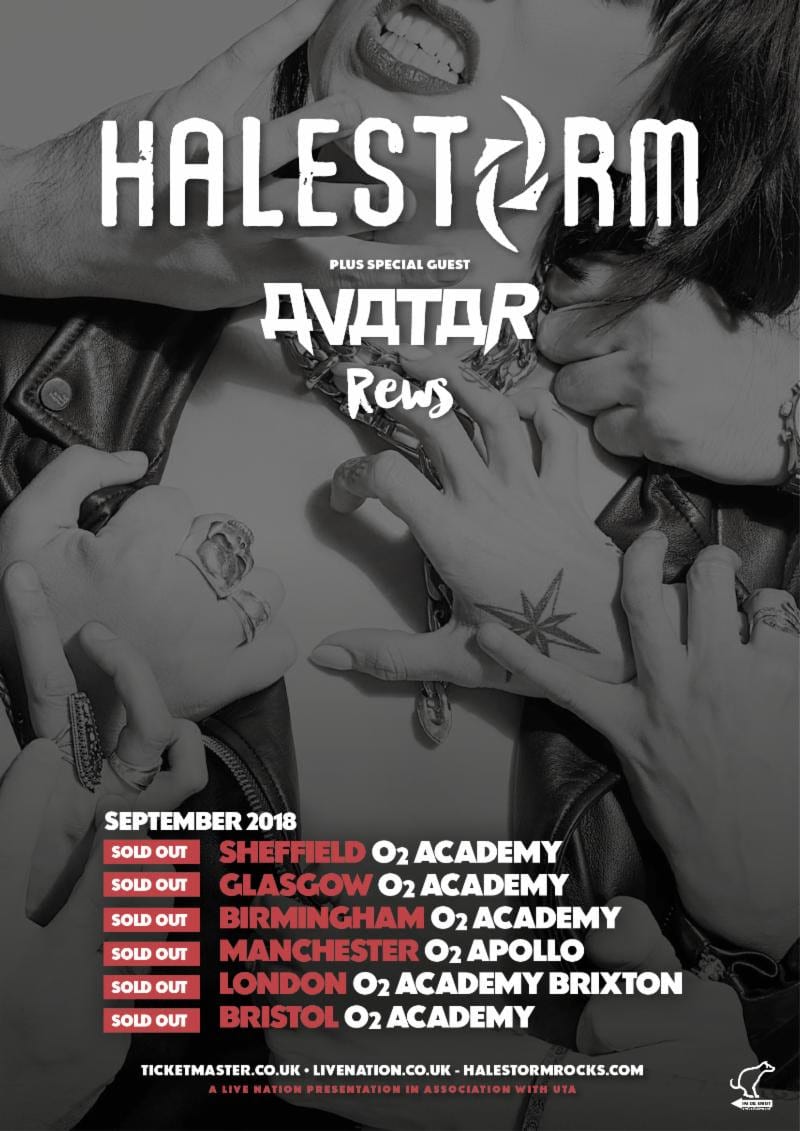 I’ll be honest with you. I used to really like, Halestorm. Those first two records were really damn good. Yet, over the years I’ve been liking them less and less. Don’t get me wrong they’re talented musicians and good performers but I just fell out with their music a while ago. When I got the opportunity to see them live, I was happy to take it. As I wanted this to be a chance to get back into their music. Surely a room full of screaming fans and the loud, roaring atmosphere should get them back in my good books. Along for the ride on this tour were British rock band, Rews and Swedish shock-rockers, Avatar. Going into this show, I had my mind open and I was ready to be impressed.

Opening the show were the British two-piece rock act, Rews and I really enjoyed this set. The pair managed to win over the crowd in great succession. From the excellent guitar skill to the banging of the drums, they certainly made themselves known. They had a strong sense of melody and their tunes were enjoyable to rock out to. The thing that really sold them, for me anyway, was the vocal harmonies. Their voices perfectly blended with each other and added a great sense of warmth and life to the lyrics. They were definitely more rhythm-focused as there weren’t any clearly defined riffs. However, there was a fantastic groove to their songs that made them so appealing. They held themselves poised and confident and that definitely resonated with the Manchester crowd. Mixing that great presence with their excellent onstage chemistry, it just made for a great opening act that got people ready for the night. They are certainly a band to check out and fall in love with.

Taking the stage next was the Swedish metal outfit, Avatar. Now I have not seen them live in a long time and I’ve not really been following their career avidly. Yet, I was still very interested to see what they could do. Their music can only be described as a heavy metal carnival soundtrack. Right away, their very presence on stage was imposing, yet engaging and the crowd ate up their performance. The sharp rhythm work and well-executed music, this well worth watching. However, I found the set to be badly paced and certain songs didn’t flow with the rest of the set. Making it feel a lot longer than it was. The crazed stage antics of frontman, Johannes Eckerström were more than compelling to win me over, as he marched around the stage and did his best Max Cady impression. At the same time, there was still something very earnest about their performance and the crowd was more than into the spectacle of it all. Ending the set on, what was admittedly, a really nice monologue about people getting to the show early to see support acts and being able to share moments with the people they meet. They launched their big, bombastic show closer “Smells like a Freakshow” the crowd gave them a pretty loud send-off. They might not be my cup of tea, but they have star potential written all over them.

The crowd roared to life as Halestorm took to the stage. The atmosphere was positively electric as the band burst into their setlist and for the most part, I was really enjoying it. The band was absolutely excellent from a technical standpoint. The guitars screeched, as the drums boomed in the back. It was all very loud and sounded quite impressive. Busting out some of the hits like “Mz. Hyde” and “Love Bites (And So Do I)” in early going of the set got the crowd going. When the crowd was singing along it was absolutely deafening. Every moment of their set the crowd was either screaming or singing and it made for an intoxicating atmosphere. Lizzy, is a fantastic front-woman, hyping the crowd and keeping the show flowing between songs. As the band thrashed away, I was getting into the set with their natural presence and charisma shining through. The newer material from the latest record Vicious was a big hit with the crowd, although I wasn’t into their newer songs. I couldn’t really put my finger on what I didn’t like about them but the new stuff just simply didn’t resonate with me. Also, whenever Lizzy screamed or yelled it went right through me and ultimately lessened my enjoyment of the night. She’s a great singer with a wonderful voice but, yeah, the screams were really like scratches on my brain. Despite that, I still liked the general atmosphere and the rocking tunes were fun to listen to. There were two moments that really stood out. The acoustic number “The Silence”, which was beautiful and a very down to earth moment of the set, that really got me. The other was the drum solo from Arejay Hale who busted out to comically large drumsticks to cap off a great solo. Just an awesome all-around entertainer.

Ending the set on, arguably, their two biggest hits “I Miss the Misery” and “Here’s To Us”. The crowd was sent home happy. A pretty decent set overall, maybe not enough for me to want to listen to more Halestorm but they were very entertaining. In all honesty, maybe I have just outgrown listening to them. Like I’ve said, I really did like those first two records but ever since I can’t say they’ve been a band that has compelled me to keep listening. They have their fans and have carved out their section of the rock world and that’s awesome. Yet, it’s not something I need to come back to

PrevPrevious.SCOTT IAN at Goldfields Theatre, Melbourne, 26/9/18
Next.HALESTORM and Avatar at Manchester Apollo on 26/9/18Next