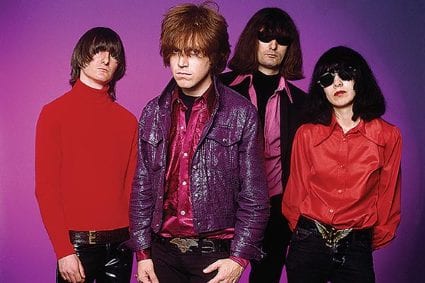 All support acts for the upcoming Scientists Australian tour have been confirmed and include appearances by Painkillers, The Loose Hounds(Perth), The Cairo Gang (US), No Sister (Melbourne), The Electric Guitars, Shanty Tramp (Geelong), Forevr, Some Jerks (Brisbane), Spike Vincent, Holy Soul (Sydney).

The Scientists existed from 1978 to 1987 Originally from Perth they moved to Sydney then to London and spent equal time in each perfecting their specific brand of sonic terrorism. Feared and revered almost as much for their tacky yet stylish appearance as for their sound The Scientists were the ultimate ‘cult’ band.

Here are some things said in the international music press about it:

“Hero’s to scores of Seattle Grunge bands – ninth compilation of their work compared to seven albums they actually recorded. Swampland was as memorable a manifesto is you could hope for.” Michael Hann – The Guardian

The Scientists are back! In their classic 1985 lineup!

Kim, Boris, Tony and Leanne! Doing one show in Perth, Sydney, Brisbane, Geelong and Melbourne only!