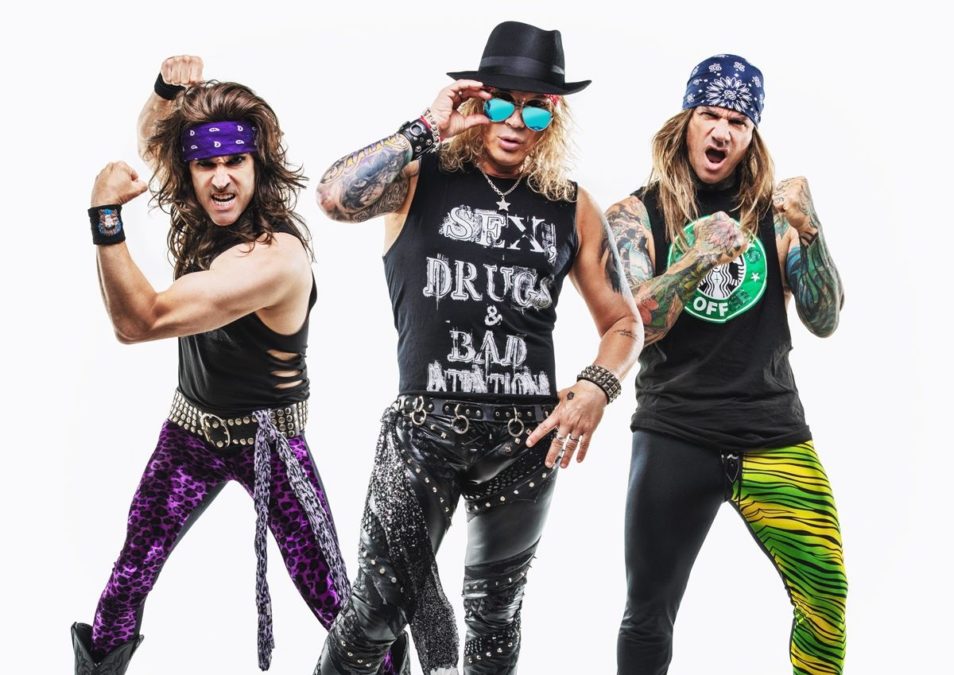 It’s hard to believe that Steel Panther celebrated their 20th year during the recent lockdowns.

For a band many believed to be a one trick pony – but a damn fine one at that – Steel Panther have endured where others have fallen and not only taught that pony a stable of new tricks, but also converted him into a stallion of the highest order.

On the surface, Steel Panther are a good time, party loving, man pack who love to sing about their exploits – real or imagined – and wear their musical badges of honour in a way that has seen them constantly wiping the mud out of one eye while it smears across their face with the other.

Love them or hate them Steel Panther have brought a sense of fun to the metal world, and with it converted a new legion of youth the world over who raise their horns for the Gods of metal.

After initially planning to conquer the globe yet again on the Heavy Metal Rules Tour to promote the album of the same name in 2019, Steel Panther have, like many others, seen their dreams shattered and their well laid plans laid to rest, leaving in their wake a nation of music lovers on this side of the world wondering if the arms of fate would ever again stretch out for the four band members with open arms.

The Australian leg of the tour, which will also see legendary outfit Sevendust share the stage, is now set down for October, but Steel Panther will be a far different force than the one initially slated to traverse the country.

In the interim founding member and bass player Lexxi Foxx has left the fold, taking with him a large chunk of the bands off stage appeal and drawing power.

In true Panther spirit the remaining three members – Stix (drums), Satchel (guitar) and Michael Starr (vocals) – have pushed on regardless and will actually be bringing a host of potential suitors with them on tour in what will essentially be a baptism of fire.

Starr sat down with HEAVY to talk about the tour and if he thinks it will be a case of third time lucky.

“Well, we’ve already got the tickets for the flight so that’s a good sign,” Starr laughed. “I don’t know man. I really feel like things are changing and I don’t feel like it’s gonna get moved at all. I think it’s solid. Everyone seems to be going back to normal. We’re touring normally in the States and heading to Europe in two weeks, but I understand everybody’s like ‘I don’t know if it’s going to happen’, but you know, I will let you guys know – whoever’s watching this – we’re coming no matter what. Unless they handcuff me and put me in jail, I’m coming!”

In what might come as a surprise to some, Starr insists that the period of isolation enforced on Steel Panther during lockdown served more as a uniting presence for the band rather than a disruptive one.

“Lockdown has been one of the weirdest things ever for everybody,” he measured, “but I tell you, it’s really brought our band really close. Obviously, Lexxi Foxx made his departure from the band, and during the pandemic – right before the pandemic – he met this girl he fell in love with and ended up wanting to have a family with and settle down, but we are still super close. It’s just made us… through all the… we didn’t have any tours. We had no income any more, so we had to come together as a band and figure out a way to get through this. Because the last thing we wanted to do was stop, and we didn’t stop. We did a lot of video content, we did a lot of virtual shows and then once any state opened up in the US we played it. We played so many shows where people were in pods or had to wear a crazy mask or only a certain amount of people allowed. Nobody allowed on stage, all that crazy shit, and we did it no matter what. We even did drive-in shows where people would go to a drive-in movie theatre, and they’d put the little speaker in their car and watch us play in their car. It was the weirdest show ever, and we did six or seven of those. But we were able to continue to work and continue to write killer songs for the next record. Plus my hair grew (laughs).”

In the full interview, Michael talks more about what to expect from Steel Panther on tour, replacing Foxx, the early days of the band and the musical climate that spawned them, what still drives the band, respecting musicians who have paved the way in the past, how far advanced plans are for the next album and more.