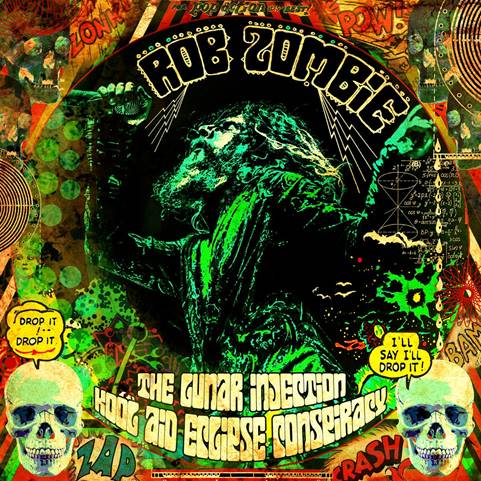 Rob Zombie is anything but safe with his career.

He has always felt compelled – or rather drawn – towards music and settings that would quite frankly terrify most artists.

His use of horror and the macabre is a theme that permeates through every release but try as he may throughout the years his love and blending of celluloid and music has always been lacking a touch when the decisive blow is meant to land.

That’s by no means discounting the man or his previous efforts which have all been fantastic but that bridge between cinematic scope and musical perfection has been tried countless times throughout history to varying levels of success.

Zombie’s upcoming album The Lunar Injection Kool-Aid Eclipse Conspiracy, while being a mouthful to pronounce, is an album that delivers on every ounce of promise and effort from previous albums and strikes the perfect chord between a man experimenting with his vast array of talent and nailing it for everything he is worth.

Utilising all of his tricks from psychedelic interludes to voice-overs, loops, samples, breakdowns and guitar solos, Rob Zombie emerges triumphant here on an eclectic assortment of songs and interludes that is near faultless in its delivery. Every moment and nuance adds to the wizardry of this album, chopping and changing as heads would roll when struck by the razor-sharp blade of a guillotine.

This album is a journey into the depths of a sonic universe we may not yet be equipped to handle, such is its ferocity and unyielding and relentless assault on each sense.

Opening with “Expanding the Head of Zed”, Zombie attacks from the get-go with an almost operatic intro which gives way to spoken word and then all-out Zombie mayhem, setting the tone for the remainder of the album without giving away all of its secrets within.

Songs like “What You Gonna Do with That Gun Mama” with its almost Austen Powers style music showcase the lengths to which Zombie goes with his music. You can almost see the swirls of the time warp manifest before your eyes by way of your ears as the songs builds and transforms you into an almost hypnotic state that proves music can visualize where other senses see only darkness.

“The Ballad of Sleazy Rider” is an almost blues-tinged all-out rock affair while “Shadow of the Cemetery Man” is almost pop-like in its ability to entice moments of rhythmic dance from an otherwise pre-occupied mind and “The Satanic Rites of Blacula” with it’s almost preordained jam intro that descends into a crushing, almost ritualistic rock monster are album standouts.

Even the under-one-minute musical interludes of “A Brief Static Hum AndThen the Radio Blared”, “Hovering Over the Dull Earth” and “Shower of Stones” are poignant and perfectly placed to enhance the overall sound and feel of the album.

The whole album feels almost subliminal in nature, with rhythmic chanting and subtle distractions combining with an out and out brash rawness that supplies the complete package.

John 5 has obviously been given free rein to do as he pleases on this album with his guitar and revels in the freedom, while Zombie plays with his voice as if it is an extra on set – harnessing every emotion both seen and unseen and wrapping the entire package into a timeless display of cinematic musicianship.

Definitely a contender for album of the year!

Listen to “The Eternal Struggles Of The Howling Man” below: