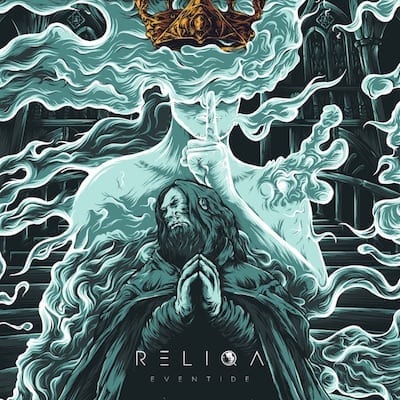 With their second release in 2018, yes you read right Reliqa are dropping their second E.P. Eventide in November this year! This four piece from the Central Coast, N.S.W. are hardworking and are working hard at it! Eventide was constructed in a many locations with the Drums tracked at Ivory Lane Studios, West Gosford, all vocals recorded at band member Miles Knox’s (Guitar/Bass) home Studio while Guitars and Bass were recorded at Brad Telfer Audio who also took care of production, mixing and mastering of Eventide.

Track one “Hangman” kicks off with a subtle keys and percussion intro before ripping into a hard driving riff fest accompanied by a super upbeat rhythm section. We’re soon greeted by Monique Pym (Vocals & Keys) who brings harmony and intensity right into this track, the pre chorus on “Hangman” builds as Shannon Griesberg (Drums) changes the beat from off kilter to straight forward goodness. With a strong chorus and two epic guitar solos by Miles Knox (Guitars & Bass) and Brandon Lloyd (Guitars & Bass) “Hangman” starts Eventide with a real bang!

“Into Fire” mixes two elements very well, a nasally vocal which I mean with all respect as the vocals are killer throughout this track together with absolute instrumental carnage! “Into Fire” reaches the ceiling and pushes through it from beginning to end!

It’s hard to not get a classic European metal feel throughout “The Halfway Point” as it punches in with another banging heavy instrument section though as the track progresses a more math metal section with hip hop vocal changes “The Halfway Point” up big time! This track is a bit of a thrill ride and it’s seriously equipped for the seasoned rider!

“E.O.D.” sits between “Golden Age”: which is predominantly instrumental with an almost jamming out style while “Earthbound” is a more low fi/ industrial track, both of which compliment “E.O.D” in a mature way, adding light and shade around a more straight forward but heightening track. The emotion and sensitiveness is felt on “E.O.D”, especially nearing the end with a repeating bass note that gives off a haunting and endless feel!

Heading towards the end of Eventide wondering will this release peter off and settle into more of rock vibe. Let it be said this isn’t the case! “Doomed” not only presents the listener with more double kicks than a high rating UFC fight it also packs the most punch on the release! Break neck breakdowns with angelic vocal sections which become straight up hip hop/ rap lyrical stylings later in the track.

Closer “Déjà vu” follows suit with a more technical musical element whilst keeping up the pace from the previous track. A powerful and captivating lyric “I’d come crawling through the dirt if I believed there was an ounce of me I could swear had been here before…”hits the feels button, this being a strong factor for the last track on what can only be described as a very strong second release for the Central Coast Metal Rockers!!