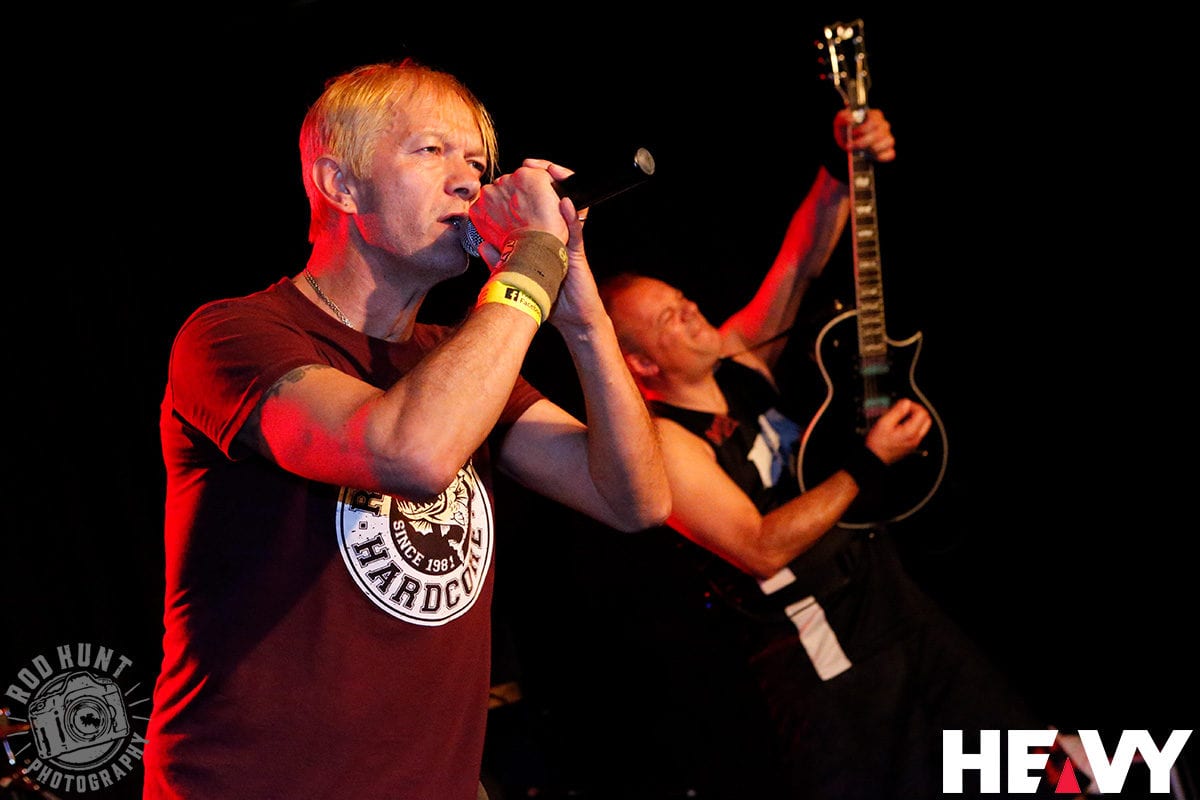 The audience was but a smattering to witness the five-piece punkers Canine who were on first. The sweet but slightly menacing intro belied the power they soon threw down. Canine played part stoner groove and hardcore here all with Tara Jaynes Cookie monster vocals. These gals and guys meant business and had chops which shined in the varied styles they put out.

Dark Horse came on and gave no quarter! From the opening of ‘Pulling Teeth’, they were slaying all with their crushing d-beat brand of hardcore!

Vocalist, Dennis, prowls his ground and hits a stance, spitting the vocals out as his life is totally invested in the lyrics. Guitarist Kieran keeps his post and thrashes three shades from his weapon. The netted Ramano and drummer Fran kept the unstoppable pace going sweetly. ‘Stop the Rot’, ‘Disfear’, and ‘Bitterness‘ were early in the set, while ‘Days of Rage’, recent album title track ‘Bomb Thrower’, and ‘Nights’ we’re amongst the closers of a great set.

Clowns opened their set. Hostile Objects were primed from the start to support the Italian hardcore legends Raw Power coming after them but wanted to display their mettle too, to them and the crowd. The second was ‘Jerk City’, followed soon after by ‘Turkish Knives’. If you don’t know them, Hostile Objects are like a crazy mix of Accused, Poison Idea, and Black Flag Their frenetic pace continued throughout the set.

A few small gaps took place due to strap malfunctions and the patter was disbanded with as soon as issues were sorted. Drum Meister Lawrence moved this along as soon as possible. ‘Young God’s’ and the chaotic ‘Wrong’ were among the mammoth set closers. Despite interruptions, these seasoned hardcore warriors played a damn fine show!

Raw Power had just started as this reviewer returned to the reasonably sized venue. From the start these punk veterans had the crowd going off and eating from their hand! They seemed effortless in delivering the harshness, beat, brutality and immediacy of their hardcore. I guess if doing this for nearly 40 years, you’ll get this. The experience was obvious here tonight, not only in their 33-song set delivered in about 45 minutes, not only in the delivery of their music but seamless, and its raw ferocity, beat, and unrelenting power. In some banter, the band told the crowd it was a dream come true to play Australia. Mauro, the original singer, had such a roughhewn unique rasp that he somehow maintained this whole set which perfectly sits with these songs. A riff of Black Sabbath’s ‘Paranoid’ was played but this morphed and ripped into another anthem.

One eager mulleted punter even managed a few cartwheels in the pit during the mad set of Raw Power. Their hardcore set, though relatively subdued in their performance carried a mass of power in sound… The principle of less is more shone through. An overall powerhouse show was here tonight, displaying their might. They played from all over their discography of albums, including ‘Hate’, ‘Trust Me’, Tired and Furious’, ‘Raw Power’, ‘Our Oppressor’, ‘Nihilist’ and closed with a mega version of Motorhead’s ‘Ace of Spades’!!

In too soon time it was all over. A great night that those present won’t soon be forgetting.