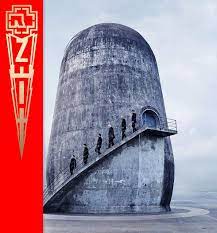 The album will come out exactly three years after their untitled multi-platinum album, which made them one of the most successful German bands of all time.

While I have never been a major Rammstein fan I have always respected their music and approach to their craft.

This is epitomal Rammstein from the outset, layers of music wrapping effortlessly over grander musical textures that purr along at a hypnotic pace.

Who gives a fuck if you can understand Lindemann or not, the mere tone in his voice is enough to sweep you along, with lashings of synthesizer giving the sound an almost ethereal quality.

The music is bare and minimal, but also powerful enough when required to create a tense atmosphere of foreboding that could best be compared to watching a black and white horror film without subtitles.

Zeit pounces from the speakers next, hauntingly beautiful in its approach that lures you in amongst the gentle keys and relative peacefulness.

So far there is nothing even remotely heavy about this album, which is strangely comforting.

It is almost like a macabre opera in nature, sweeping vocals keeping a measured tempo before a soft underbelly begins to materialise briefly before quickly being quelled by Lindemann who once again asserts his authority.

Things quicken in the back end – but not much – as the song ebbs and flows like the tide, threatening to turn into a raging whirlpool at times but never managing more than a trickle.

Schwarz offers more of the same, a soft piano arrangement combining with sensual drumming and more rolling vocals that almost sound romantic with the accent.

It sounds like somewhat of a love story, but for all I know could be a tale about feeding naughty children to the local cattle…

I’m not even sure if this is a full Rammstein record at this stage. It could well be a solo album with some ring-ins on piano and synth, but I doubt it.

Giftig has an almost 80s intro, sputtering keys ramping things up as the first bit of mongrel threatens to break loose.

Lindemann’s vocals are quicker and more urgent here, and it sounds like he is actually starting to get pissed off at something.

This track gets the blood pumping more, yet is still somewhat strangely subdued. At least I can hear more of the band members here so it’s definitely not a solo vehicle.

Weird sounds inject themselves at haphazard junctures, only adding to the musical mystique.

As the song lurches to its conclusion it seems there is still life left in the spirit of Rammstein.

Don’t get me wrong, I am actually enjoying this although it is nothing like I expected. And therein lies the problem.

I’m pretty sure Rammstein don’t give a stuff about what is expected of them at this stage of their career. I would even go as far as to say they could possibly deliberately snub their nose at expectation in order to fulfil their own musical desires over that of others.

And for that, I salute them.

Zick Zack retreats initially to the softer side of life, riding on the back of some momentum-building key sounds, before Lindemann interrupts proceedings and once more starts his verbal march over the music.

This song is leaning more towards what I had envisaged this album sounding, the prominent drum pattern acting like a stomping boot to the throat and smothering the darkness.

This song is almost pop-like at times, a catchy feel-good tone that is savagely stunted by a cool bass run that seems to spur the others into action and the controlled mayhem once more takes centre stage.

Finally I can understand one of the song titles!

OK fires into life with an almost angelic chant that summons more visions of demons than holy spirits, and by the time the drums kick in with their rhythmic beat, it’s pretty obvious which side of Heaven this battle will favour.

The synth elements are still highly dominant but by this stage of the album are finally starting to meet some sonic resistance by way of guitar.

As a matter of fact, this is the first time I can recall hearing any guitar in the mix which makes me think this is yet another case of Rammstein marching to their own beat.

The guitar is powerful, yet subtle throughout and introduces sections of the song that seem to intensify as the track wears on.

Meine Tranen trickles to life in an almost storytelling nature, the soft structure of the song slowly building through heavier synth before recoiling into serenity once more.

I might be wrong but this sounds as though Lindemann has put much of himself not the delivery but he could be asking for chocolate topping on his ice cream cone for all I know.

Angst hints at something a little angrier, and when the drums rumble to life amid the chugging of guitars it seems my prayers have been answered.

But Lindemann is having none of this, once more using his voice as an instrument and hijacking the musical ferocity before it gets out of first gear.

This song is more industrial-sounding than the rest and plods along at a measured pace that is annoyingly catchy.

This track feels written for the stage, with instrumental pieces almost firing into being at set junctures, emulating the ferocity of fire and lava that will inevitably accompany this song live.

It starts off like a Tom & Jerry cartoon on a trip to the circus before the guitars take the lead and conduct proceedings.

Lindemann has a crack at singing here and doesn’t do too bad a job, but it’s when he descends into darkness at select points the song really shifts gear. This song has more personalities than my ex-wife, but is all the better for them.

Stand out track so far and with only two to go looking like my pick of the bunch.

Lugen begins with musical raindrops hitting the forest canopy (metaphorically of course), before Lindemann does his spoken word over soft music thing again, and I get the feeling he is trying to tell me something.

He gives up quickly when guitars cut him off before they subside into the tranquility once more and the next phase of the story begins.

It feels like a love/tragedy tale of abandonment, with its sweeping verses and deliberate vocals, before the wicked witch of the North takes over and Lindemann attacks the song with more urgency and intensity.

Adieu, the final track, sweeps to life amid more electronics and ambiance that suggests Rammstein are not going out all guns blazing.

Or maybe they are.

This song has a hard rock swagger about it and is led by guitar rather than providing an outlet for it.

Again, the song withdraws before becoming too violent, and perhaps best sums up Zeit as a whole.

Rammstein have not attempted to make an album that shows how heavy they can be.

We all know that.

Instead it is a collection of masterfully constructed songs that shows when a band is fully comfortable with themselves and their music a whole new unseen world is laid bare for them and their listeners.

And what a magical land it is.