Pushing Through The Pain With NICOLAS CAGE FIGHTER 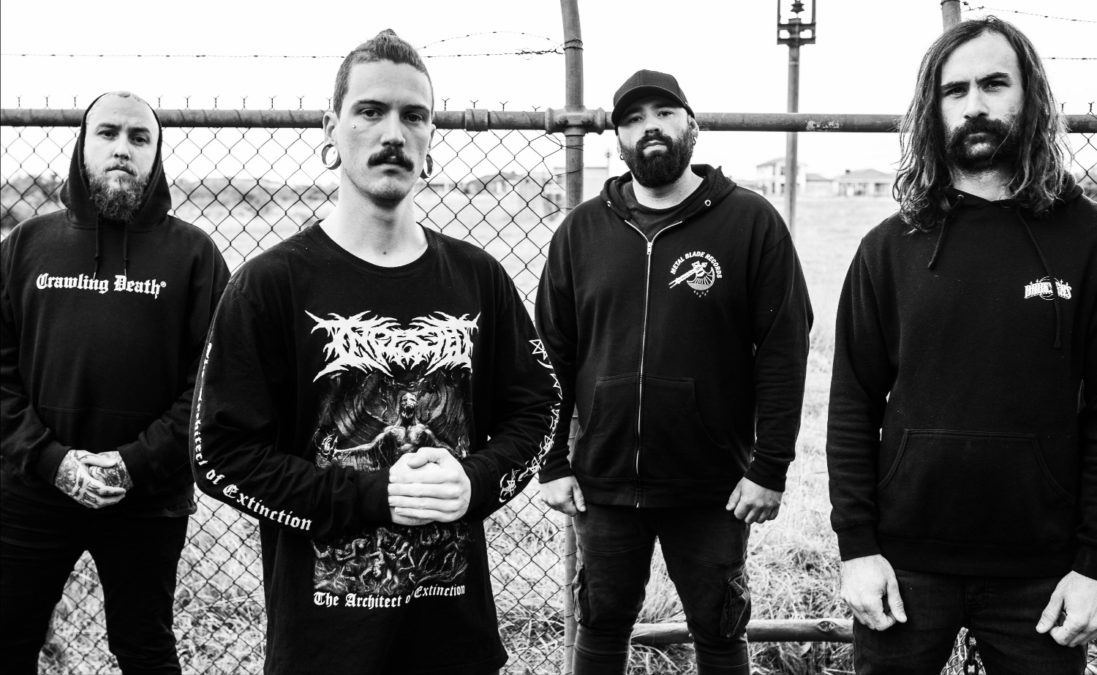 It would be easy to say the name Nicolas Cage Fighter out loud and still not catch on to the sheer genius of the play on words. Even now I’m sure there are some of you who are re-reading that opening line with a WTF look on your face thinking Krispy has finally lost his marbles.

Well, I haven’t quite. Not yet anyway.

Let’s face it, who doesn’t love Nicolas Cage? The only thing that could perhaps make him even cooler is if the guy could shift straight from the brooding lost puppy dog look into a snarling ring fighter complete with deadly hammer blows and a sickening elbow that could slice the top off a cheese grater.

Yes, I am going somewhere here…

If you combine that elongated rant and condense it considerably, the man standing before you would be Nicolas Cage Fighter, the suavest and baddest man on the planet.

This group of Victorian upstarts of the same name don’t need to flex their muscles inside the octagon. Instead, they just smash the shit out of their instruments with such venomous intent that even Chuck Lidell would likely take a couple of steps backwards at the site of the boys in full flight.

Nicolas Cage Fighter have been knocking punters senseless for just over 10 years now, taking a slower, more measured trajectory that has seen them build a solid fan base and following that can only come with time and patience.

While NCF have always been a brutal band, the boys have ramped things up even more on their latest album The Bones That Grew From Pain, which was unleashed in all its fury today.

The band have pushed themselves into even darker rabbit holes on this album, allowing themselves a fresh approach that encouraged them to change things up according to feel.

Guitarist Justin Ellis sat down with HEAVY during the week to talk about the crushing new album and its sonic trajectory.

“It’s definitely in the vein of what we’re trying to achieve with NCF,” he smiled. “It’s just heavy grooves with big breakdowns. We listen to a lot of different stuff, but mainly a lot of hardcore and death metal. It’s definitely a step up from our last EP. We’re just trying to improve and make music as heavy as we can.”

The EP introduced a legion of new fans to the Victorian hardcore outfit and provided yet more incentive for the NCF faithful. It was an EP that captured the band in electric form, but rather than rest on their laurels the band vowed to deliver something even better on the follow-up.

“After we did the EP last year it sort of snowballed in that stuff started to take off really quickly,” he recalled. “ I think I had a couple of months where I said this is the timeframe for the album, let’s get it done. We’ve been in and out of the studio every week pre-proing songs until we were 100% happy, and then we went in and recorded it. Because of COVID it fell apart a little bit. We had to have a few breaks here and there, but overall we’re super happy with how it all came out.”

In the full interview, Justin goes over the EP in greater detail, talks about experimenting musically and how far to go, the dark tone for the album and how they achieved it, spending more time in pre-production and how that impacted the final result, the lyrical components of the music and where it came from, the blending of hardcore, death metal and late 90’s metal that defines their sound, hitting the road and more.

Nicolas Cage Fighter will be touring throughout Australia this August with Relapse, Blood On My Hands, and Shōkan.

PrevPrevious.Premiere: HIDDEN INTENT ‘Get A Dog Up Ya’
Next.A DAY TO REMEMBER Unveil New SingleNext