Premiere: BIGGER THAN JESUS “One for the Road”

Hard-rock five-piece,Bigger Than Jesus, are back with their first official audio release in over 2 decades with an unstoppable, adrenaline rushing, album “One For The Road”‘ is out now!

‘One For The Road’, released via Melbourne’s Dinner for Wolves (home of The Screaming Jets, Red Bee, Dead City Ruins and Superheist) and the first Bigger Than Jesus release for the revered label, is a 6 track Vinyl & Digital release featuring lost tracks from the critically acclaimed 1993 Killervision sessions and beyond. Tracks include ‘One for the Road’, ‘Laughing’, ‘Just My Life’ and ‘Wicked Love’ and are accompanied by 2 further tracks written throughout Bigger Than Jesus’ reign.

The release is an intense collection of tracks which represent Bigger Than Jesus in their finest form.

An incredibly tight live band, BIGGER THAN JESUS command audience attention with their explosive, atmospheric and energetic performances. ‘Back in the day’ they continually and relentlessly blew the minds of their audiences at every gig they played. Their reputation as one of the most exciting and entertaining Australian bands was second to none.

Bigger Than Jesus are authentically Australian – both sonically and in their approach to recording & performing. Steve Lucas’ vocals (founding member of infamous Aussie punk band X) are delivered with a refreshing Aussie tone. Combined with the twin guitar attack from Hank Oudendyk and Brett Kingman (hired gun for numerous Australian touring acts) and the backbone provided by Kevin McMahon (No) and Craig Whitelock (The Virgin Soldiers, Serpentine, Nick Barker), the ‘Killervision and beyond’ sessions were something very special indeed.

‘One for the road’, ‘Laughing, ‘Just my life’ & ‘One of us’ were first recorded at Gotham with Tony Cohen in 1994 before being re-recorded at Sing Sing and finished by Scott Kingman (Horsehead, The Screaming Jets) in 1996. ‘Wicked Love’ was first recorded at Gotham around the same time; 1994, and finished by Scott Kingman in 1996. ‘Night Call’ was recorded and produced by Bigger Than Jesus & Mark Forrester at Platinum Studios from December 1992 to January 1993.

‘One For The Road’ was skillfully remastered by Gil Mathews at Aztec Studios in 2018 and is now poised and waiting to knock your head off.

‘One For The Road’ Out now (released on Oct 12)
via Dinner For Wolves. 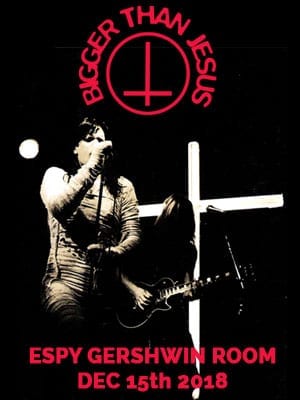