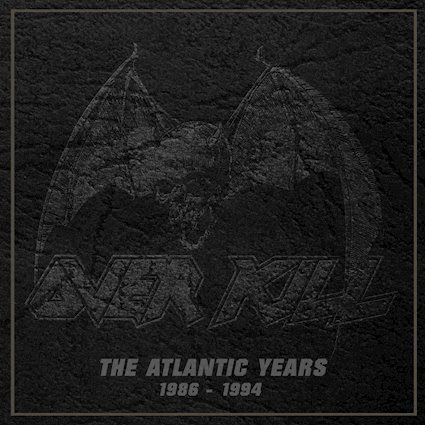 Whenever metal-heads of a certain vintage gather together to enjoy a few tunes and ales it can seem as though you are only ever a Spotify shuffle Anthrax track away from an argument about breaking out about ‘The Big Four’ Metallica, Megadeth and Slayer all reside within this thrash royalty with an almost universal acceptance. However, the final member, Anthrax, normally needs that mate who still owns a skateboard and wears his hat backwards to fight their corner.

So if not Anthrax, who? Because when it comes to The Big Four, an argument can be made that timing was everything.

For example, a strong case could be made for Exodus. Who, were it not for bad management and record label lethargy, should have released Bonded By Blood before Metallica’s Kill em All.

The other contenders bandied about are usually Testament and Overkill, as well as Kreator and on and on the list goes.

But the fact remains that most of the bands mentioned as alternatives to Anthrax have no rightful claim, apart from Exodus and Kreator, based purely on when they released their debut albums.

Of course, such a forensic examination of the chronological birth of thrash is unlikely to take place fourteen beers in at your best mates man cave. And it only takes someone to let a beer leave their lips long enough to mutter “Vio-Lence should definitely be in there” before everyone reaches for their phones and taps the Uber app.

But perhaps on the drive home, or more likely whilst nursing the morrows hangover, the more interesting argument becomes…. Who were the biggest bands amongst the tsunami of acts that followed?

And with that change in perspective, Overkill is well and truly worthy of consideration.

So the release of OVERKILL – ‘THE ATLANTIC YEARS 1986 -1994 is the perfect opportunity to revisit six of their first seven albums and see just where they deserve to sit in the overall history of thrash. Starting with 1987’s Taking Over, which was the follow-up album to the debut effort, Feel the Fire.

An album that doffed its cap toward the NWOBHM with melodic riffs whilst forging its own identity with more speed, heavier drums and the snarling vocal approach of Bobby ‘Blitz’ Ellsworth.

Even by today’s standards, it is an impressive album. Critically well received, but it struggled commercially, like most metal albums of the period. However, simply by containing the enduring classics, In Union We Stand and more specifically the anthemic The Wrecking Crew, this album stands as an Overkill classic.

In keeping with the mid-80’s ridiculously prolific business model of, release an album, tour for 12 months and then release another album saw 1988 deliver Under The Influence.

Stylistically and production wise this was more of a continuation than an evolution, specifically Shred and Never Say Never before Hello From The Gutter shows a band with new ideas and the balls to explore them. From there, Overkill starts to well and truly discover its own sound. A sound that would prove to be the band’s D.N.A for the next two decades.

Commercially, Under The Influence achieved a small step forward and remained in the Billboard’s top 200 albums for 13 weeks straight.

Leading into 1989, another year another album, The Years of Decay brought nine songs with a running time of almost one hour. Six of those minutes are spent on opener Time To Kill, a song that does its best at going toe to toe with Metallica’s Battery and Blackened. Next up is Elimination, arguably Overkills best song and the go-to track if ever asked to best sum up what these guys are all about.

I Hate takes punk by the scruff of the neck and leaves Overkill fingerprints all over it. Shortly thereafter, Playing with Spiders/Skullcrusher spends the first four minutes invoking early Black Sabbath doom before morphing into something that many years later would have none other than Pantera cite this album as a massive influence.

Of the remaining songs, it is the title track that stands out. As close to a ballad as you’ll find in the Overkill catalogue, for the first three minutes at least. The Years of Decay and its longer songs are an example of a band benefiting from years of touring and recording and becoming more confident in their abilities.

It was then two years before Horrorscope was unleashed and saw a major shake up in the band’s personnel as guitarist/songwriter Bobby Gustafson was let go and replaced with two(!) new guitarists.

Whenever a band makes such sweeping changes, it can be a ‘hold your breath’ moment for the fans. But they needn’t have worried, this is an essential Overkill album. At a time when Metallica and Megadeth ventured into an altogether more commercial direction, Overkill put it all on (green and) black by delivering this comprehensive thrash masterclass.
Benefiting from a vocalist at the top of his game, married to quality production values, the band tears through Coma, Infectious, Blood Money and Thanx for Nothin’ and still has Horrorscope and New Machine up its sleeve!

The resultant album sales remain the band’s highpoint, and deservedly so. Perhaps now is the time to for an intermission, go empty your colostomy bag, grab a beer and reconnect with loved ones before we move on to what
came next.

I Hear Black saw the light of day in February 1993 and suffered from just how high the bar had been set by Horrorscope.

Far from being a bad album, I Hear Black was hamstrung by its opening tracks having an ill timed, almost post-Dio era Sabbath sound. With the title track having a very Zero the Hero vibe at a time when grunge had begun to dominate.

But then again, many of the album’s later tracks would have been universally lauded if only the C.D cover had read Pantera rather than Overkill. Or perhaps more tellingly and indicative of its retrospective quality is the obvious influence this album had on Down‘s debut, still two years away.

And therein lies one of the great strengths of this box set, the ability to appreciate the music on its merits now, away from the white noise of the time. W.F.O came out in ‘94 and signalled the end of Overkill’s tenure with Atlantic Records, and therefore almost the end of this review (insert sighs of relief here).

This self produced effort starts with Where It Hurts, a more than solid opener that leads into Fast Junkie. Curious for its Megadeth sound, think High Speed Dirt, Mustaine vocals and all.

Normal service is resumed on The Wait/A New High in Lows and stays in that lane for the remainder of the album.

Another solid offering that gave their loyal fanbase more of what they had come to expect. High energy heavy music dovetailing with its strong sense of groove.

What came next for Overkill is an opus for another day, but needless to say that the simple fact that they not only survived but continue to thrive to this very day is testament to their quality.

Perhaps Overkill weren’t amongst the very first to get their feet under the ‘greats of thrash metal’ table, but this look back proves that they, at the very least, deserve a seat at it.