EVERY TIME I DIE ‘Radical’ 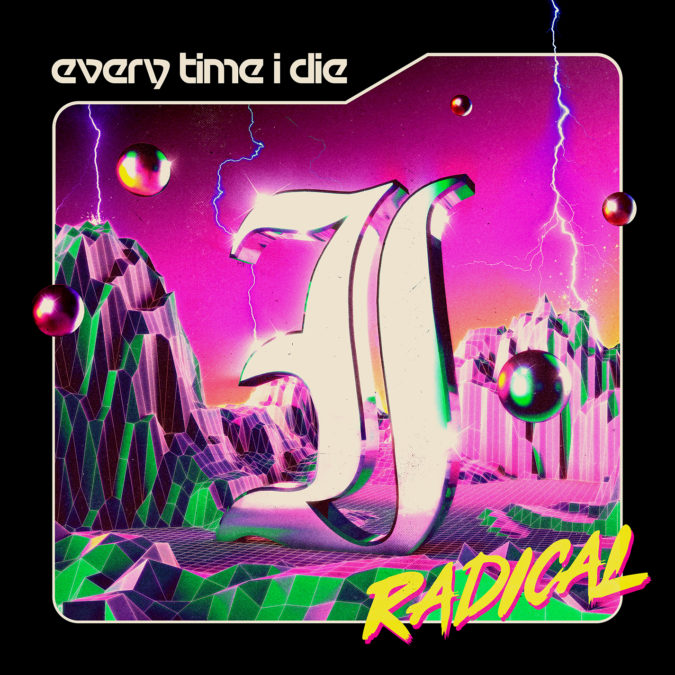 Let us start with a safe assumption!

If you have clicked on the link to this album review, I already know that you are a die-hard fan of this band, and as we already know, there are two types of people in this world. Those who have never heard of Every Time I Die (bless their empty souls) and those who live for every granule of music this quintet from Buffalo, New York create.

It has just gone five years since Every Time I Die released the ball-busting Low Teens, which was their first with mega Metal/ Deathcore Producer Will Putney (A Day To Remember, The Ghost Inside, The Depression Sessions feat. Thy Art is Murder, The Acacia Strain and of course his band Fit for an Autopsy).

Now in 2021 we have Radical at our doorsteps, the band’s 9th studio album, which also sees the return of the one and only Will Putney as producer. From the get-go this album has been produced and recorded at a super high volume, in fact it should almost come with a warning sticker….. but as I’m sure we can all agree that would super ultra lame, like “Parental Advisory” stickers or as Jello Biafra calls it “the Tipper Sticker” lame!

To put it simply, this album (as expected) belts, it is raw, and it charges like a rhinoceros on heat!

“Spare only the ones I love, slay the rest” almost spews out of Keith Buckley (singer) over a droned guitar feedback as opener Dark Distance launches into our lives! A classic ETID opener with all the trimmings, with the lower tuning selected and the downbeat in full swing this opener will translate well live, but let’s be honest which song of theirs doesn’t?

Before I go any further, it must be noted that Radical has a nice number of tracks, at a cool 16 in total most tracks a short and punchy numbers and second track Sly is no exception. It never ceases to amaze me how Every Time I Die always manage to pummel the listener time and time again, boarding on pure old school hardcore meets solid groove Sly may actually incinerate someone’s ear drums. The classic riff and lyric creating melody during this track is a convulsion of sounds! I can already picture the dance moves by the band and us punters, and they look simply spectacular.

Due to known delays and known reasons why album releases are being drawn out Every Time I Die have given us plenty to chew on over the last 10 + months. A total of five tracks were dropped, more recently is the continued energy track that is Planet Shit. This has also become a fan favorite prior to the album release, as the band have been performing it live as well. Check out some of live performances on the interwebs!

While you’re at it, check out the film clip to Post-Boredom, this being the fourth track on Radical. I need not bang on about this track, it’s a choice effort which features some gosh darn cool rhythm sections. Stephen Micciche (Bass) opens Post-Boredom with a bass line that sets the song into go mode, with a gap that simply lets the song breathe making way for those classic Buckley vocal lines and a set of tom rolls from Clayton “Goose” Holyoak (Drums) that will hold up for decades to come, talk about groovy!

Okay, readers, it’s time for a quick story on musical therapy. On December 8, 2020, Every Time In Die dropped the first two tracks off Radical on the same day. On that day, I the writer, had woken up out of a 10-hour coma after an 8-hours emergency heart surgery which saved my life.

What better way to recover in a hospital ward then to binge on Colossal Wreck and Desperate Times, honestly does it get any better?! I will never forget my wife telling me that ETID had dropped two tracks that day, what a memory, and thank you all for reading this. Both tracks are something special in their own right and yes music truly does save or at least help us through, mine being just one example of this.

Riff masters Jordan Buckley (Guitar) and Andy Williams (Guitar) deliver all over this latest offering, one example of their skill sets is (another play on words) track named All This And War. A spasmodic 3 minutes and 10 seconds that will see fretboards being worn down to a pulp all over the plant. Also, there is a surprise on this track and I ain’t going to ruin it……

Every so often Every Time I Die sooth the punter with a track that breathes but leaves us breathless at the same time. Moor from the band’s 2014 album From Parts Unknown and It Remembers from Low Teens did just that, both respectively widening the ETID pallet. If those songs made you melt, then add track eight Thing With Feathers to your list. It will serenade you and to make sure that becomes a reality, (if I’m correct) the one and only Claudio Sanchez from fellow New Yorkers Coheed and Cambria guests on it, need I say more?

Pick of the album is track nine, Hostile Architecture, it has all the elements that make a solid Every Time I Die stand out song, the lyrics and how they’re delivered and patterned over the music make for a track that will stay on repeat for many listeners, God damn this track has so many tasty little nuggets in it!

The third track we were given way back when was track ten AWOL, it was also sneakingly premiered/ performed late last year on the Every Time I Die Christmas Telethon. If you haven’t watched this “Fund-raiser” film/ movie/ comedy….. actually, I don’t know what to call it, do yourself a favor and check it out, honestly, wow haha!

Remember the unrelenting vibes that From Parts Unknown and the 2012 album Ex Lives gave us? Well the track The Whip could easily sit within either one of those albums, it smells of that era of ETID and almost 10 years on the quintet have refined that certain style with a type of musical maturity.

Speaking of maturity is White Void, a well-crafted heavy rock anthem that brings diversity into the latter half of Radical, this song goes deep so hold on listeners.

Keeping the pepper on the metaphorical steak is track thirteen, Distress Rehearsal. This very well may be one of the heaviest tracks ETID have ever recorded/ released. It’s fast, cunning and downright gritty!

Though it doesn’t start out as another peppered track, sexsexsex follows Distress Rehearsal with perfection as it builds and builds. Keeping that small sample of cheekiness that Every Time I Die are famous for sexsexsex is that track that is lyrically intriguing on Radical, to the hardcore ETID fans, you already know what I mean by that!

Continuing their musical prowess is People Verses clad with the classic Keith Buckley vibrato another deep story is told with a bridge that speaks from so far in the heart you can almost taste what is being projected out. After two decades, Every Time I Die have mastered the feeling of creating a heavy track with real life feel and real life soul.

The final and longest track on the record is We Go Together, at a nice 5 minutes and 2 seconds it is the one track that takes time to form and build into a grit train in which all passengers are continuously thrusted about. There is just so much growth on this album, it features all the classic ingredients that make Every Time I Die what they are. But Radical is so much more than that, it has been carefully crafted into a neat package of downright historic hardcore meets heavy rock.

An easy 10/10 from this reviewer, honestly, I’ve only given you a taste of what this album truly is all
about.