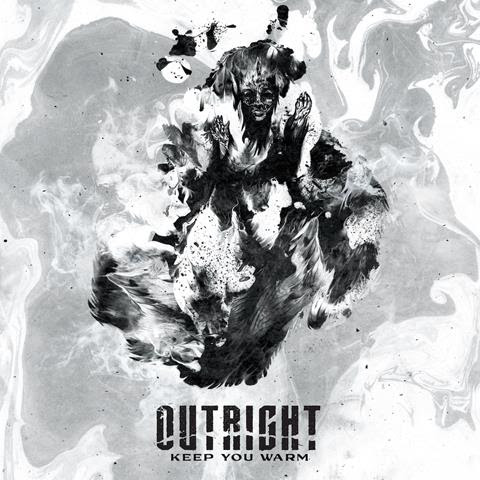 After starting their own label Reason and Rage Records to release their debut 7” Dedication, Outright quickly marked themselves as serious contenders with an unapologetic and almost ruthless approach that commanded respect.

By 2014 they had released their debut album Avalanche to critical and commercial acclaim before focusing more on the touring aspect of band life and cementing their rapidly growing reputation, enhancing their ability to spread their message to a wider audience.

With only one more release – the 7” Holler in 2018 – Outright have been biding their time in an increasingly unstable climate, harnessing their anger and resentment into a collection of songs that allows them to address social unrest and associated dilemmas.

The album, Keep You Warm, was preceded by the singles Burn and The Hammer, both hinting at the brutality this Melbourne quintet were preparing to unleash.

Opening with Truth Teller, which eases to life before exploding in a fiery burst of contempt, Outright are intent from the outset to right any perceived injustices they see in this world.

Vocalist Jelena Goluza obviously took her angry pills before heading into the studio, her vocal assault both captivating and frightful at the same time.

Gang vocals punctuate the song, adding a more accessible edge to what is essentially a hardcore punk number. Alternating between harsh and even harsher vocals, Goluza emphatically announces her intentions in just one track, raising the bar pretty damn high for the remainder of the album.

One of the album singles, The Hammer, fires quickly from the blocks, an energetic spark of disdain that would be a pearler in the moshpit. But, seeing as how this song is already out there on the usual platforms, I shall let you explore further for yourself…

Linchpin breathes life courtesy of a stuttering intro that seems intentionally so. Not much, but it’s there.

It’s here that I actually do a bit of homework and discover that bassist Brett and Nick on guitar also provide backing vocals, which explains the differing growls that filter through some of the tunes.

Not that you could tell by ear alone, such is the cohesion in delivery and temperament in calamity that binds Outright together.

Linchpin has a slightly slower tempo than the first few songs – but doesn’t lack in punch because of it. It is a well-crafted number that ebbs and flows vocally and instrumentally if anything highlighting the chemistry within the band.

Tied Through Time idles to begin before a quick guitar lick kicks off a frenzy and off we go again.

It’s fast, frenetic and brutal, almost rollicking along at a gallop before pulling back briefly with a quick moment of respite that was never going to last.

The musical disparity within each song is a feature of Outright’s music, showcasing a confidence and assuredness seldom displayed by bands of the genre.

The band almost plays within themselves at times, utilizing the underutilized ethos of less is more which in turn allows the finer moments to resonate much more clearly.

Fortify wastes no time in getting into things, exploding from the gates like an enraged beast. Outright are at their best when snarling and bashing their way through songs, and this is no exception. I don’t know who Goluza is angry at here, but I sure as hell hope it’s not me!

The next track is called Breathless, which is precisely what I am at the halfway point.

Not that Outright seem to give a shit because they haven’t put this track on there to help out with the situation. More to rub it in.

I find myself wondering how anyone could survive a whole set live of these guys given the bruising nature of the music through a set of headphones and make myself a mental note that if I go to their upcoming show in Brisbane to get myself a perch well away from the action.

I’m no spring chicken these days.

The Call is a long one, coming in at seven and a half minutes, and you can pretty much tell why by the isolated guitar intro that repeats a cool lick a few times, armed with a healthy amount of distortion to maintain interest.

As the drums kick in and push things along, I prepare for another blow to the temple but Outright have other plans in store.

In the early stages this is more of a stoner rock kind of tune, sludgy and measured and as heavy as anything else that has come before it.

Goluza keeps track nicely with the music, singing her way over the top of the sweeping riffs that seem to cry out in misery every time her vocal chords tense to signal a sonic barrage.

This kind of music isn’t really for me but Outright manage to keep it interesting despite the lengthy running time.

A beautifully placed guitar solo gains my attention again, swaying gently in the foreground against a measured instrumental line that simmers below the surface.

I’m not sure if that was Joel or Nick on display there, but whichever one it is goes straight to the front of the class. You don’t often hear an elongated guitar solo in hardcore punk!

The Call eases even more as it approaches its conclusion, and at the very least is a welcome respite for all of us middle-aged reviewers out there.

Second single Burn is up next, and you know what to do, before Tyrants & Vultures flays to life on the back of a quick guitar solo that encourages Goluza to scream into the mic once more. I really hope she managed to expel some demons during the recording of this album because it seems like there’s quite a few things about modern society that piss this girl off.

This track has its roots deep in hardcore punk, with an anarchistic delivery that tapers off midway through before reigniting itself once more into a crazed finale that cancels out the seven minutes of serenity that almost got my heart rate back to normal.

Album closer Silent Spring pulls back a touch in the early stages to reveal a more rock-influenced track that still spits with enough swagger to deliver the knock-out blow.

They may have taken their time (eight years) between albums but when the outcome is this good there can be no argument.

Outright have spent their time well and learnt to harness their musical output in such a way to slowly suffocate you into submission just as much as they choke.

Music isn’t just about the delivery, it’s also about the journey, and Outright have obviously been taking notes.