ONCE HUMAN Head Down Under 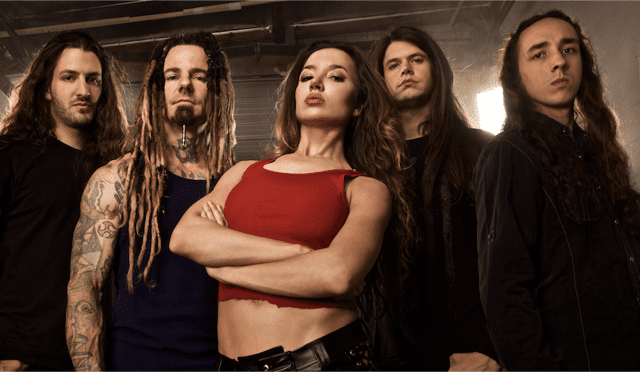 California’s melodic death metal force Once Human will be making their debut visit to Australian shores in early 2018 with an extensive tour of both capital and regional cities in support of their latest release Evolution (EarMusic/Sony).
Led by former Machine Head / Soufly guitarist Logan Mader, Once Human possess a powerful, dynamic and brutal attack that will leave you in awe after witnessing the sheer brutality that emanates from the stage!.
The band’s secret weapon however is powerhouse frontwoman: Sydney’s own Lauren Hart who has a growl that could make the earth shatter, it has to be seen (and heard) to be believed!
Lauren is excited about returning home and finally bringing Once Human to Australia!
Once Human is completed by drummer Dillon Trollope, bassist Damien Rainaud and guitarist Max Karon
Watch the bands music videos for Eye Of Chaos, Gravity and Dark Matter
Although still a relatively new entity in the metal world, Once Human are delivering a live performance that is setting the world on fire everywhere they go. Having made waves with their 2015 debut, The Life I Remember, the band have dramatically progressed beyond the melodic death metal sound of that release into something more complex, emotional, distinct, and devastatingly heavy.
Evolution is not just the title of Once Human’s second release, it’s an armor-plated declaration and the band are more than pumped to be heading down under for the very first time to kick all of our asses this coming February & March!
TOUR DATES
Wednesday, February 28: Crowbar, Brisbane 18+
Tickets: https://crowbar.oztix.com.au/?Event=77679
Event Page: www.facebook.com/events/1041006059368026/?__mref=mb
Thursday, March 1: Shark Bar, Gold Coast 18+
Tickets: http://kingdomsounds.oztix.com.au/?eventId=77832
Event Page: www.facebook.com/events/350677158684139/?__mref=mb
Friday, March 2:  Newcastle Leagues Club, Newcastle 18+
Tickets: http://www.moshtix.com.au/v2/event/once-human-usa-guests-the-vault/98157
Event Page: www.facebook.com/events/338039243291076/?__mref=mb
Saturday, March 3: The Bald Faced Stag, Sydney 18+
Tickets: http://www.moshtix.com.au/v2/event/once-human-evolution-tour-blood-oath-festival/98372
Event Page: www.facebook.com/events/1817309224960935/?__mref=mb
Thursday , March 8: The Basement, Canberra 18+
Tickets: http://kingdomsounds.oztix.com.au/?Event=77762
Event Page: www.facebook.com/events/257648888066848/?__mref=mb
Friday, March 9: The Evelyn Hotel, Melbourne 18+
Tickets: http://evelynhotel.oztix.com.au/?eventId=78371
Event Page: www.facebook.com/events/517595315238824/?__mref=mb
Special Guests on all shows are: In Death (QLD), Rise of Avernus (NSW), Hollow World (VIC)
Local supports to be announced
With epic line ups on every show and even more dates to come, this is going to be one massive metal juggernaut you won’t want to miss!
Tickets onsale now!
www.stagmusictouring.com.au
Evolution is out now
www.jbhifi.com.au/music/browse/metal/evolution/328834
http://smarturl.it/OHEvolution_iTunes 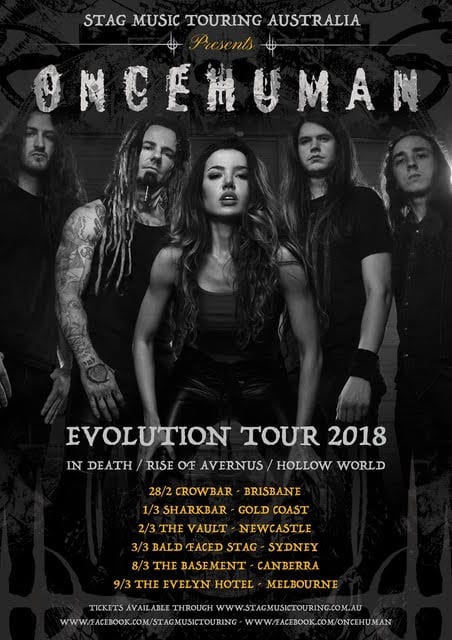