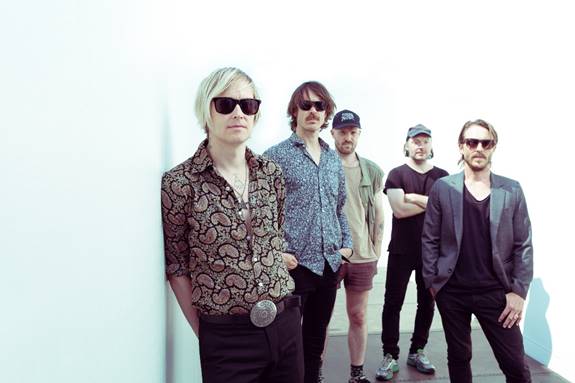 No Prisoners with REFUSED

Refused are one of the worlds most respected and influential punk/hardcore bands with everyone from Anthrax to Dillenger Escape PLan to Paramore citing then as having a huge influence on their respective careers. While obviously a source of pride for the band themselves, frontman Dennis Lyxzen also admits that you have to take such compliments with a grain of salt and move on otherwise risk becoming a victim of your own self-importance.

“You can’t really think about it in that way”, he said almost dismissively. “It’s incredibly flattering and humbling that all these people and different bands are saying that they really like Refused. It’s awesome to carry with you in some weird way but on the other hand when you create you’re always moving forward and thinking what’s the next thing? You can’t let your mind be bogged down by stuff like that. Most of the times it can be distracting but its also pretty awesome (laughs). When I was a young kid my favourite band was Anthrax and the first time I met Scott Ian he said ‘can I take a photo with you?. I love Refused’! My mind was going that’s not right. That’s not how we should do this, it should be the opposite so things like that… it’s amazing to be a part of that journey but you can’t really let it affect you too much”.

After flirting with comeback album Freedom in 2015 Refused are back in all their anarchistic glory with War Music which will be released through Spinefarm/Search and Destroy on October 18.

“It’s a very tight, focussed, aggressive and violent record”, noted Lyxzen. “We wanted to create a record that had that… you want your music and your art to reflect the times you live in. I think we succeeded with that which is what we wanted both lyrically and musically. The artwork, everything has this almost violent tone to it. It is aggressive but it’s also very catchy. One of our things with the band is we can take something that can be quite violent and aggressive but at the same time we have choruses that you wanna sing along to”.

On past released Refused have become almost renowned for throwing curveballs musically, but with War Music Lyxzen says the curveball is more the fact one isn’t thrown rather than is.

“It’s a bit more tight and straight-up than some of our previous records which in itself might be a bit of a curveball”, he laughed. “When people think about our band they think ‘oh they’re that band who is gonna throw something really experimental into the mix’ and just to do that because it’s expected would be a bit predictable so maybe its actually unpredictable that it is a more straight forward record. It’s a very disciplined record and almost the longer the album goes the more intense it gets. The last two songs are some of the most intense songs we’ve ever written”.

After forming in 1991 and releasing two records – This Just Might Be… the Truth (1994) and Songs To Fan the Flames of Discontent (1996) – that were more in the realm of hardcore, Refused divided fans and critics alike with The Shape Of Punk To Come in 1998. It was an ambitious record that strayed outside of conventional hardcore parameters, incorporating electronics and jazz with more ambient undertones.

It was a period in the bands history that produced their darkest days before ultimately becoming not just a turning point in their premature demise but also strangely a key point in their eventual return.

“At the time – especially with Songs to Fan the Flames – we had an idea about the core value of our band. When we made Shape I think what happened was that when we toured the States we were very much a band of the scene and we went to America and nobody liked our band. The people that liked our music hated our politics and the people that liked our politics hated our music so we came home from that tour and we wrote shit for The Shape of Punk to Come almost as a protest to everything. We didn’t want to be defined by other people’s narrow expectations of what we were supposed to be any more so we wrote Shape as a reply to that. We incorporated all these different elements because also at that time and point we were all moving in different directions. When you’re a young person you move quickly and when we were doing Shape it was one of those things where if we had have tried to record it a year later it would have been impossible. We managed to keep it together for that period of time and that recording and that’s why that record is all over the place but in a good way”.

Despite being a punk/hardcore band at heart, Lyxzen admits the criticism at the time did hurt the band and may have even played a part in their 1998 breakup.

“Yeah, yeah, of course it hurt”, he nodded. “It was weird because we put our heart and soul into this record and we thought it was a cool record. We didn’t think it was groundbreaking but we thought it had some killer tracks on it and was a great record. We came out and started touring and people didn’t care. It was one of the things where we definitely felt that Shape of Punk was the start of our decline as a band (laughs) and we toured that record for eight months and then broke up and when we broke up we broke up saying that was kind of a failure on our attempt. A lot of the people that were really adamant and hardcore fans didn’t like Shape and that does hurt. Three months after we broke up Shape of Punk to Come is the record that everybody talks about and then they’re showing the ‘New Noise‘ video on MTV and you’re like, what happened? (laughs). It’s weird. It’s been a weird journey. It’s funny to think about… during the rock history you see those documentaries about bands and their rise and how they found success and we have this weird success story with Refused where no-one in the band was a part of it (laughs)”.