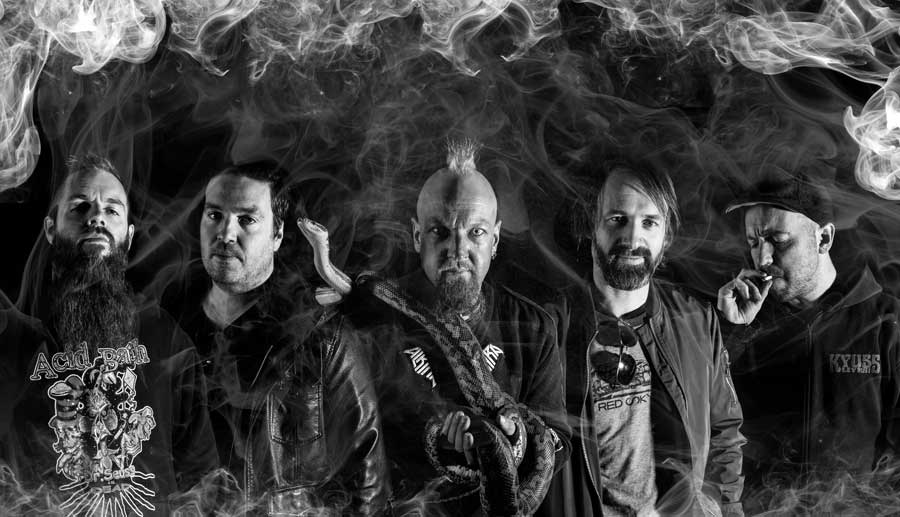 “It’s a nice change to sort of relax into the groove rather than just playing thrash metal,” explained Aaron Butler, better known as Azza Bok, talking about his ‘other’ band, Never.

Better known for his guitar work in Frankenbok, Azza has been playing with Never for a number of years, seeking an alternative from the constant grind and intensity of music and life in the much more heavier ‘Bok.
“The basis for Never formed many years ago during the times of Frankenbok when I was getting swallowed up by the seriousness of writing records and shit. It all became a bit serious and not so much fun and we were just painstakingly going over the same kind of shit and I kinda lost some of the enjoyment,” he said honestly. “I hooked up again with Dan McDougall – who I had played with in Block previously – and we wrote some songs and came up with a project called M.S.O, which was the Melbourne Sympathy Orchestra, which was all about having fun again and things grew from there into what it is today. We have had line up changes but everything that has happened has culminated in what you hear with Never now.”

Earlier this month Never released their third E.P, the appropriately titled Volume 3, with Azza saying the band is looking forward to pushing themselves into uncharted territory.

“It’s been coming for a while,” he enthused. “It’s probably a bit slower than the last release but I think it’s got a whole lot more groove and I think this time we’ve totally got it right soundwise. There have been so many occasions where Dan has given me a mix and asked my opinion and I was like ‘fuck yeah mate, sounds wicked, put it in the shops – GO!’ but he kept going back and mixing it I don’t know how many times (laughs). He must have made himself sick doing it but admittedly every time he did, it got so, so much better. The part for me that I enjoyed the most was that what I don’t have to do anymore is go into the studio, record the stuff, and sit there for days and days and days to the point where when you’re done they hand you a CD and you never, ever wanna fucken hear it ever again (laughs). I think Dan takes that all on the chin for everybody else. He puts his head in between those speakers for days on end and by the time it is done he can’t stand it but I just got handed this fresh CD and I was like, holy shit, it sounds like it was recorded in L.A! I’m really, really happy with it. With the songwriting there’s no particular goal or style, we just do what we do. Everyone in the band is a writer and pretty artistic and anyone that comes up with a song it’s open slather pretty much.”

The style of music played by Never is in stark contrast to Frankenbok, with a more stoner rock feel that owes much to bands of the ilk of Black Sabbath and Clutch.

“I think that anyone who has anything to do with metal has some Black Sabbath influences whether they know it or not but Dan has been Clutch mad for years,” Azza admitted. “I think when it was just a couple of us jamming in the earlier days the music was a bit more funk orientated and we used to do a lot of left field music but when Dan came and started playing the guitar it automatically got that big Southern groove about it. We went away a bit from doing the weirder, kookier type shit rather than fucking with people all the time and we started to learn more towards the stoner rock type thing. A lot of people call us a stoner rock band but I think we’re more of an anything goes band. What I reckon we kind of are is basically if you go through all of your parents record collection – if you have cool parents (laughs) – it’s all the Deep Purple and all the Black Sabbath and Led Zeppelin and the Rose Tattoo and all of the great rock and roll stuff that used to be yesterday… well I think all of that stuff is still as good as it was yesterday and we’re just having a go at it. I don’t think we’re reinventing the wheel here and doing anything absolutely groundbreaking. It’s just standard rock and roll type shit but with our twist on it. People say ‘yeah, but everybody does that’, but you know why? Because it’s fucken cool man.”

One of the tracks on Volume 3 is Freedom, which is a cover of, and pays homage to, Dave Tice from legendary Aussie band Buffalo. Not only does the band cover the song, but Tice also lends his vocals.

“And what a day that was, holy shit,” laughed Azza. “The first Never gig we ever did was with Dave Tice at the Reverence Hotel in Melbourne. Dan had gotten in touch with him and was influenced by him and there was lots of talking about jamming together and I think Ando and a couple of the boys actually broke off and joined the Dave Tice band for a few shows. I think it started with us asking does he mind if we covered that song and he said he was stoked for us to do it and then we were chatting to him and we asked if we ever got around to recording it would he be amongst it and he’s the sort of bloke who just says yes to everything (laughs). He doesn’t seem like he’s slowing down at any time. It seems like he’s still 17 and fired up! He makes us feel old. He’s got this devious smile about him so no matter what, everything is a good idea (laughs).”

In the modern age where musicians live more on merchandise than album sales, Azza says Never have conformed to the new way of thinking and have decided to put their music out there without charge.
“It’s not different at all for us,” he shrugged Volume 3 being available for the princely sum of zero dollars. “Since the start one of the whole ideas… you know what it’s like these days, everyone spends millions of dollars recording their albums and then you basically end up giving them away. They’re just a promotional tools. No-one makes any money from selling records. Dan is very clever at the recording side of things and manufacturing CD’s and printing T-shirts and all the things that come with getting a band across the line and out into the public and his idea was I wanna take this to the people and rather than try and sell all of our stuff we just wanted people to have it. We had this whole idea of being like an old school punk band and being self-made; you write the music yourself to start with then you record it yourself and do all the artwork yourself and manufacture it yourself. He was doing every step of the recording from the video clips to making the shirts to folding and duplicating the CDs to licking the stamps to sending them to people. Basically, from our first release, it was a case of letting us know if you want one and we’ll fucken send it to you. Everyone in the band was getting around with a fistful of CD’s, just handing them out. At one stage if you got in touch and wanted us to send you one we’d send you five to hand out to your mates. It was more about getting the music and the word out there rather than actually trying to make any cash and I think the only cash that we ever tried to make was when Dan printed the t-shirts and every single sale from that went into buying more CD’s and more cardboard etc to keep manufacturing stuff so we could do it for free.”

Never will be officially launching Volume 3 with a night of live music on November 25 at the Spotted Mallard in Melbourne.

“It will just be a chance to play our show and do all of our songs,” Azza laughed.

“We’ve been rehearsing ten or twelve songs or whatever but right before every gig you always hear it’s only a half hour set or a twenty-minute set and you end up having to cut half of your songs. This will be one of the first times where we all get out and say this is our show and we’re gonna take the time we need to stretch our legs and do the full Never show.”

To get your free copy of Volume 3 hit the band up on their Never (Australia) Facebook page or see them at the launch.

PrevPrevious.“‘Made of Breath Only’ is our ‘…And Justice For All'” – sleepmakeswaves
Next.Mike Portnoy Chats To Heavy MagNext