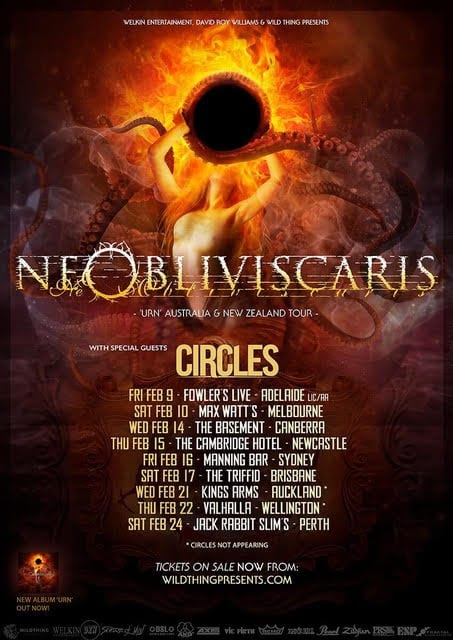 Australia’s foremost Kings of progressive, extreme heavy music, Ne Obliviscaris will be touring across Australia and New Zealand in February 2018 in support of their new album Urn which is out now!

The band are excited to welcome fellow Melbourne progressive powerhouse Circles as special guests on ALL Australian shows!
Circles combination of mind bending, pounding rhythms and rumbling bass lines set against butter melting vocals and razor edge guitar tones put them at the forefront of the evolution of global heavy music.
With two releases to their name, 2011’s The Compass EP and their debut full length, 2013’s Infinitas, plus 2016 single Sand & Wind, Circles have received praise from fans and critics the world over.

Their relentless tour ethic has seen them share the stage with some of the world’s most prestigious heavy and prog bands both at home and abroad.
Playing with the likes of Meshuggah and Textures at Euroblast 2013, touring Europe with the Dillinger Escape Plan, Monuments and After The Burial and at home with Fear Factory, Periphery and Polaris.