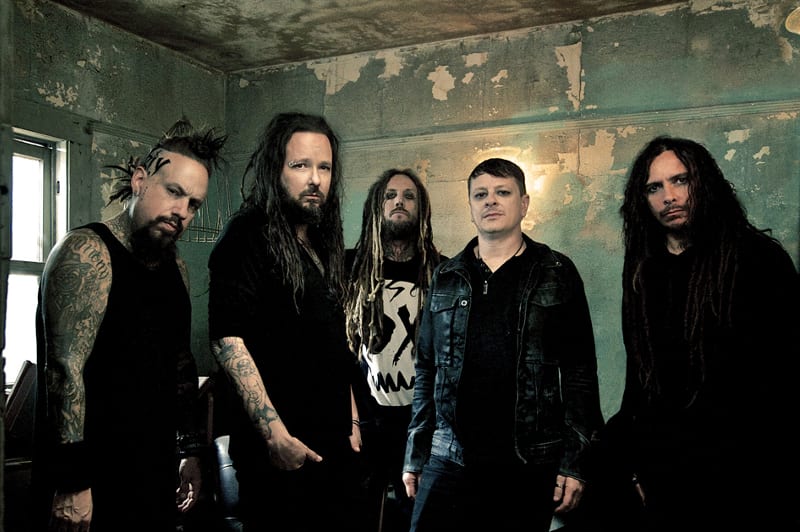 “It’s a really big deal!” enthused Korn guitarist James ‘Munky’ Shaffer ahead of their headlining slot at next years first ever Download Australia Festival. “We’re honoured that Download asked us to do this. It’s such a big festival, and it has been for a long time. Before it was Download, it was called Donnington Festival in England, and it has carried a lot of heavyweight acts through the years, so it really is a big deal. It’s a huge honour for us to come down there. We haven’t been there in a long time, and for us to be representing Download for this one show is pretty awesome.”

Korn will only be making the one appearance on our shores for the festival, but Munky says despite thoughts to the contrary it is the band’s decision, not a contractual stipulation from promoters.

“We wanted to do the one Download show and then probably return the following year with the proper show, and do a proper Australian tour,” he stressed. “The thing was kind of logistics. We wanna bring you the best show, and we were only able to do that for the one show in Melbourne with our production and stuff. We’re at a stage of our career where we wanna put on the best show we can every time. We don’t wanna cut corners. We want fans to still see us, but we want them to have the full experience like the U.S fans get, which is a big show, big lights, big sound. For us to cut back and do that it wouldn’t be the full Korn experience where we are now with our career. It would be like going back ten years or more. It just made sense to do the one show for now. When we return, we’ll be able to do a proper tour with the full production.”

When Korn played their first note in anger in 1993, it is fair to say they were a breath of fresh air on a scene that had become increasingly weighed down with formula. Their down-tuned guitars and experimentation were innovative and fresh, but in the early stages, the band struggled to find a solid fan or support base.

“I remember when we created the first album and the first batch of songs there was nothing like it,” Munky reflected. “I remember people telling us that we would never get played on the radio; MTV will never play the videos, and we just had this fuck you attitude because we’re gonna do what we want and how we wanna do it and we’ll build a legion of fans without mainstream media, and people will eventually catch on. We had a kind of an against the grain vision in how we wanted to succeed. We didn’t care if anybody… if they didn’t like it if they did like it… it would just stimulate people into talking about us. It wasn’t so much shock rock or anything, but it did take people back. Here were these skinny kids from suburbia, they’re white, they have dreads, but they’re dressed like hip-hop, and they’re playing this unusual metal. It was like, what the hell’s going on? We were playing by our own rules, and that’s definitely something we wanted to always keep.”

Munky says that Korn was as much a product of their environment as they were of their musical tastes, with certain events, in particular, having a major bearing on their final sound.”It came from a conglomeration of influences that we had at the time, which was all the bands that we loved,” he mused. “We took all of our favourite elements of these bands – bands like

“It came from a conglomeration of influences that we had at the time, which was all the bands that we loved,” he mused. “We took all of our favourite elements of these bands – bands like Faith No More, Sepultura, Rage Against the Machine and hip hop bands like N.W.A because we were in and around L.A. during the L.A riots and when gangster rap was… it was around the time of that feud between Ice Cube and N.W.A, so that was the sort of things we were really inspired by. I remember when we did our first demo and looking outside and seeing tanks going down the road at the studio because there was a curfew because the riots had broken out. I dunno… it just fuelled that angst that we already had. It was a combination of what was happening in L.A., and I mean, that from a cultural standpoint as well where the hair metal thing was going away, the grunge was not… fading… but just people were experimenting with the grunge sound a little more. There was the whole post-punk thing going on, and we were a by-product of all of that.”Korn’s self-titled debut album, released in 1994, shook the foundations of the metal world and almost single-handedly ushered in a new genre that has been emulated and copied to this day. The nu metal movement had begun and Korn

Korn’s self-titled debut album – released in 1994 – shook the foundations of the metal world and almost single-handedly ushered in a new genre that has been emulated and copied to this day. The nu-metal movement had begun, and Korn was at the forefront of that rebellion. The album has rightfully been classified as one of the finest debuts ever, with Munky admitting the band were trying to make a musical statement from the outset.

“We wanted it to be high energy and something that translated live,” he affirmed, “because we were such a … we wanted people at our shows to go crazy, so we wanted to create something on an album that was gonna provoke insanity in a crowd, and I think Jonathan delivered on that. He took listeners to a whole different place as a songwriter that people hadn’t experienced before. He is the driver of the vehicle, and the music is the vehicle for that. We knew we were creating something unique, but we didn’t know it was gonna take things so far into the future.”

Korn’s early music was based around anger and aggressiveness, with vocalist Jonathan Davis using it as an outlet for all the things that had troubled him to that point. No subject was taboo, with Davis recounting tales of child abuse, drug abuse and bullying through his lyrics, in the process opening up a vulnerability and sensitive side to the band that allowed fans to connect on a deeper and more personal level.

Through twelve albums, Munky says that, although the band has cleansed themselves of many of their grievances, there is always something to stoke the flame of anger.

“If you look at society today, it’s frustrating,” he seethed. “It makes you mad when you see the social aspects of poverty and an imbalance of rich people and poor people and famine in parts of the world. There are people out there struggling, and it’s frustrating. It’s frustrating, and I’m speaking about things like in our country we’ve gone backward 50 years in the last year. There’s not a forward-thinking society. It’s very frustrating to be part of this Western culture that seems to be going in the opposite direction to what everybody imagined. 2020’s coming up. We’re in the future but there’s still racism, it’s crazy. That shit makes me angry, and I know that Jonathan writes lyrics, but those are the things that fuel me when I’m writing riffs and the music side of stuff. I know Jonathan has his own personal dramas that he deals with, and judging from the last record, I don’t think that it is that difficult for him to get current frustration. It can be challenging. We have families, and that presents its own challenges (laughs).”

Despite having practically the whole world against them when they started out, including people who shunned their attempts at commercial exposure, Korn has gone on to become one of the most popular and successful metal bands of all time. It is a situation that Munky says the band takes in their stride, but still one that gives them personal satisfaction when they reflect on the doubters.

“We’ve watched bands carve their own path in the past – unusual bands like Mr. Bungle – odd, weird, strange bands,” he smiled, “even Tool. Tool was an unusual band, and bands like System of a Down: we’d all sit back and watch them and look at them, and we kind of knew we were on the right path. It was a case of let’s just stay focused and look forward and quit worrying about who’s doing what. Radio this, and television that. There was a moment when there were some management and some record label trying to steer us in a direction that was gonna be more radio-friendly, and that resulted in the song ‘Y’All Want a Single’ (laughs). They loved it, which was crazy! (laughs). They were like, we get it, we get it, this is so cool, and we were like, ‘Okay’ (laughs). It was like a ‘fuck you’ to the record company, and you wanna release it? The irony there is so funny.”

Like most fans, Korn fans scream out every album for the band to go back to their roots and try to recreate the sound and intensity from their self-titled album and it’s follow up Life is Peachy. While acknowledging those two albums were classic Korn, Munky also says to recreate that period of the band’s musical life is a process in futility.

“For us, it’s almost impossible because we have such creative experimentation when we’re in the composing process,” he explained. “It just felt like a natural evolution to expand on what we’ve done. You kind of have the same ingredients. Fieldy‘s gonna play bass the way he plays bass, Head and I are gonna play guitar how we’re gonna play guitar. Jonathan’s gonna sound like Jonathan, so these things are always gonna be the same, so you’re gonna get a Korn related sound. At moments it may be like, this sounds like an old riff here, but you’re gonna have a more evolved song structure and melodies; more of an atmospheric feel, an electric element. That’s just a natural evolution for the band. For us, it would be almost impossible to try and recreate those first two records. There’s such a purity to those records that we wouldn’t wanna go back and try to re-do them.”

PrevPrevious.Derrick Green of Sepultura on ‘Machine Messiah’ and touring Australia in 2018
Next.Slatts of King Parrot on the band and returning to AustraliaNext