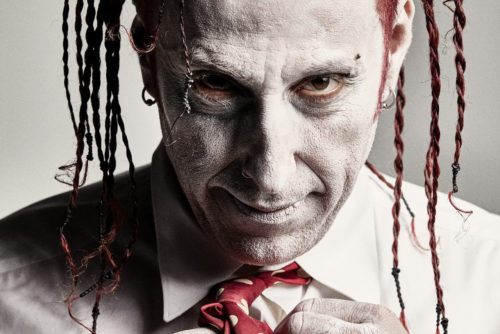 Morgan Rose is best known for his work behind the drum kit with Sevendust, but the man maintains a high profile behind the scenes, acting as producer and appearing on many other artists’ releases.

Until now the notion of him releasing a solo album outside of Sevendust has not even rated a mention but that’s not to mean it isn’t warranted.

Those expecting a carbon copy of his work with Sevendust will be left disappointed, with Controlled Chaos streets away from the heavy sound employed by the Atlanta based hard rock outfit he spends the majority of his time with.

The opening track, a 26-second intro, is the albums first surprise and one would sense a deliberate attempt to outline Rose’s intentions from the outset.

This won’t be a Sevendust influenced EP – in fact, it won’t be influenced by anything the listener would expect.

In a slow-burning piece of music that doesn’t even crack the half minute mark, Rose almost teases with the ambience, threatening to break into all-out rock before snapping to an end instantly leaving you wanting more.

“The Answer” starts with Rose’s trademark drum sound and Lowery’s guitar work hints at taking the song down familiar territory but despite showing glimpses of Sevendust-Esque sounds this track sets the tone for the remainder of the EP.

Rose’s much loved harsh vocals barely raise a sweat throughout, with the focus more on clean singing and blending orchestral moments with rock sensibilities.

The title track and “Come Alive” are both rockier numbers that never quite reach the scale of hard rock, while the piano intro on EP closer “Exhale” hints at a self-gratification that it would be impossible to deny.

Rose’s vocals throughout – but particularly on “Come Alive” are beautifully layered and at times almost epic in their delivery.  It would be interesting to listen back through some Sevendust albums and listen with a different ear, tuning in to Rose’s more melodic backing vocals rather than the current focus on his screams.

Controlled Chaos won’t be for everyone. If you are a diehard Sevendust fan expecting a gap-filler before their next album then steer clear. Listening to you whinge afterwards just wouldn’t be worth it.

If, however, you are a genuine fan of music and are looking for a good rock album to fill your ears then give it a chance.

If not just to isolate one component of the sound of Sevendust and in the process provide a valuable insight into the moving parts that make up the complete picture.

Watch “The Answer” below: