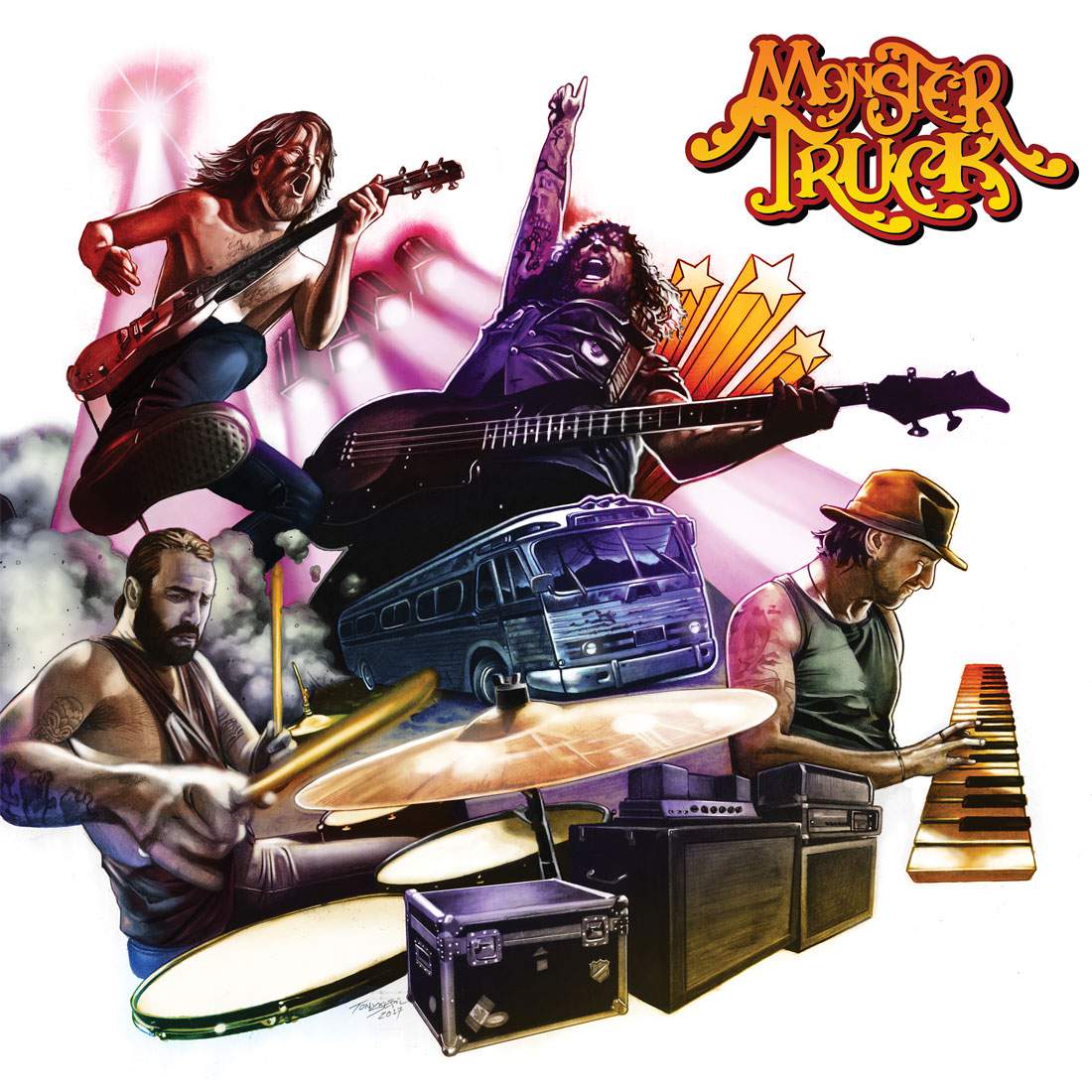 The highly anticipated True Rockers (an album which Monster Truck’s guitarist Jeremy Widerman vowed to leak out himself if it wasn’t released by Spring 2018 – clearly, Mascot Records managed to talk him out of it), is the latest in Monster Truck’s line of aptly named LPs. Prior releases Furiosity and Sittin’ Heavy are able to sit smugly as quintessential descriptors of the Truck, and True Rockers is no different.

As if a 21st century coming of Marty McFly’s infectious inception of rock’n’roll in Back To The Future, opener “True Rocker” judders with frontman Jon ‘Marv’ Harvey’s Herculean bass (a true companion to Marv’s colossal blues snarl) and a corrupting jitter of rhythm from drummer Steve Kiely’s corner. Pair this with the distinct hefty throb of Widerman’s guitar, macho squad vocals, and Brandon Bliss’ Hammond keys hum that hovers with the celestial glow of a guardian angel alongside the surrounding brute force of instrumentation, and the ‘Recipe for Monster Truck’ is alive and kicking. “I am a true rocker” is Monster Truck’s opening testimony – accentuated by a slightly blithering, yet hearty, midsection preach from guest Dee Snider – and it’s incontestable.

Subsequent tracks “Being Cool Is Over” and latest single “Thundertruck” are heavy as the hooves of Lucifer, yet rhythmically nimble in their execution, and are riddled with the omnipresent, trademark Truck gang chants in an extra helping of frenetic flame. “Hurricane” exemplifies Monster Truck’s mastery of staccato, shake-me-baby rhythm, whilst “Devil Don’t Care” saunters in with a son-of-a-bitch smile before storming into chasmal, harmonica-enriched blues rock.

However, whilst Monster Truck shine in their pursuit of hard-hitting rock, tender beauty can be found in the sleek “Undone” and cavernously monumental “The Howlin’”. “Undone” is an enticing ballad, a tentacle of audible smoke that slithers around the waist and spins the listener in a scintillant waltz of blues voltage and tormented lyricism. Meanwhile, “The Howlin’”, a hazy, southern-drenched track, sees Kiely’s ever-driving, rampant percussion employ the atmospheric dynamism of Joey Kramer in Aerosmith’s “Livin’ On The Edge”.

“Evolution” and the lyrically clichéd “Young City Hearts” will perhaps induce perplexity in long-time fans, as a lighter, more commercial rock sound is flirted with. Here, the beloved organic energy of the Truck droops. However, “Evolution” is expansively atmospheric, its battle cry chorus swoops with the free wing of an eagle, and “Young City Hearts” twists with a surprise Pendulum-alike electronic riff. HEAVY certainly won’t begrudge a band who build outside of their blueprints.

A band that name ‘sonic booms’, ‘nebulas’ and ‘uncontrolled fire’ amongst their influences, Monster Truck have brewed an album that is predominantly of sheer devilish possession in its own right – and HEAVY is quite content to remain in an unexorcised state of True Rockers entrancement.