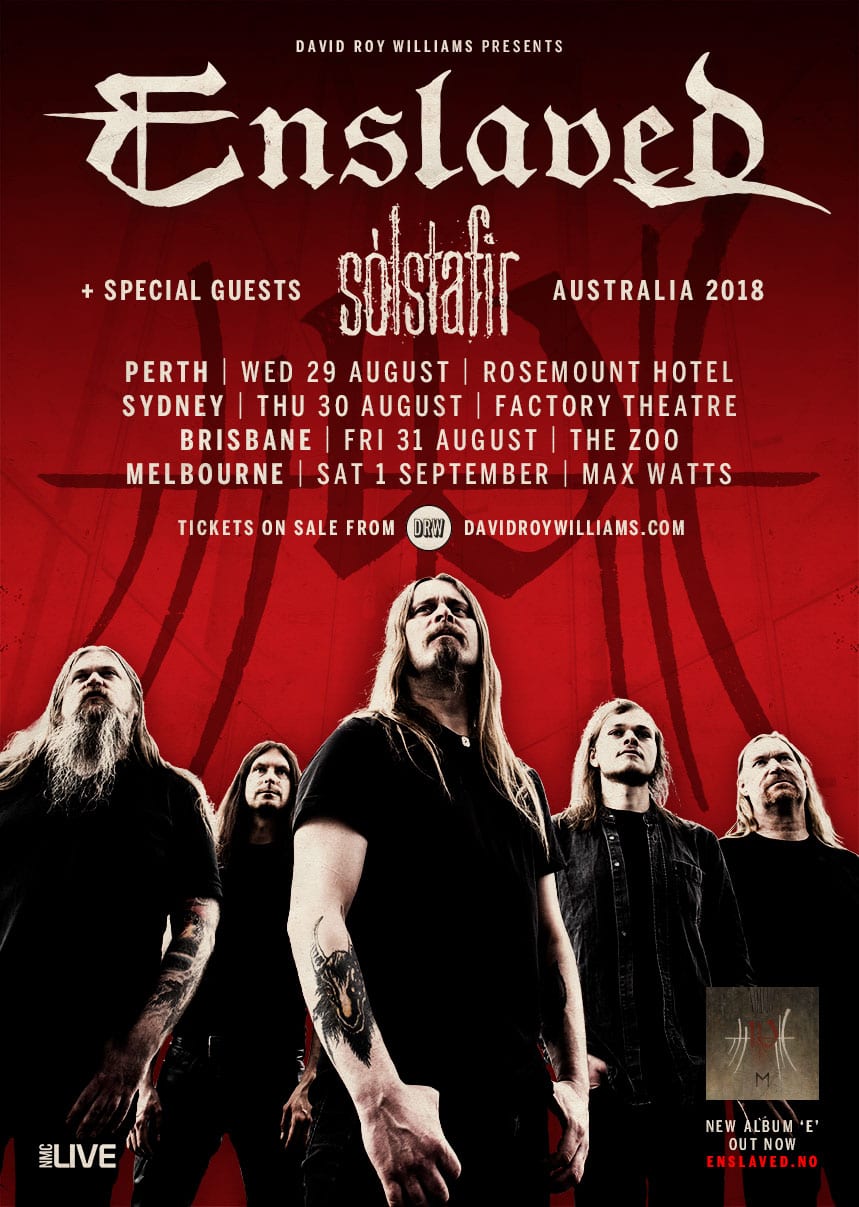 It can be a  Thursday night but that doesn’t stop us Sydneysiders from getting our weekly dose of metal. This was a gig that I had been waiting for, for a while and from the looks of it so were a lot of other people. The Factory Theatre was filling up pretty quickly with a sea of black, even before the first act went on. I like this venue for a few reasons but mainly given how spacious it is and like The Metro, from wherever you stand you have a decent view of the stage.

Taking my usual spot on the side of the venue just near the sound desk, I made it just in time for Tamerlan Empire,  a band that I’ve been rather intrigued by and was curious to see how they would be live. The five-piece band from Sydney began their set with a fierce energy that definitely drew in quite a few punters who also seemed quite taken by their demeanour and middle eastern tunes. Playing tracks off their latest release ‘Age of Ascendency‘, they certainly brought forth a heavy combination of black metal with traditional Middle Eastern elements and waves of symphonic melodies,  a style that is distinctive and definitely one they can call their own.  It was  great to see how well they’ve mastered this sound as well and how they’ve managed to skillfully blend the sounds of the East with black metal. Their stage presence was riveting as was their music, but there was something about their choice of stage wear that seemed a bit much to me. I think maybe less is more but then again, to each his own. There’s no doubt that they left an impression on the minds of all present with their raw, brutal and emotive dynamic.

Post that was a set and a band I had been waiting to see for a very very long time. There is something incredibly sublime and ethereal about Solstafir and their music, something I can never quite put my finger on but it’s there. The lights darkened as the mesmerising “Nattfari” came on and the much-loved Icelandic metallers came on stage, their mere appearance being met with such loud applause and cheer. This was it. This was the experience I had been waiting for. It had begun! Addi‘s vocals were beyond captivating,  taking you on a journey through the ancient lands of the Nordic people, each note a part of a greater story.  A voice that literally makes you feel as if you’re floating mid-air into a different realm, it has an almost hypnotic effect on those that listen. There was a sense of sheer awe in the air as many in the crowd such as myself were completely stunned at just how prolific and beautiful everything was.

They played a magnificent set, with one track from almost all of their releases much to my delight; and when the intro to “Fjara” came on,  it was all goosebumps and tears for me. Solstafir’s stage presence and their chemistry with each other are two of the many amazing things about them. Guitarist ‘Pjuddi’ and bassist ‘Svabbi’ took turns in visiting each other on stage for a little dual shredding, clearly having the time of their lives; it was so heart-warming to watch. Their simplicity, passion and pride for their heritage and culture reflect wonderfully in their music making a live performance by them just that much more special. I was completely lost in a trance throughout their set. With Addi dawning his special Icelandic Navy captain hat, the crowd announced their final track “Goddess of the Ages” much to the disappointment of those gathered. But reassuringly,  Addi confirmed that they would be back soon enough for their own headline tour. With that, came the end of one of the best live performances I’ve ever had the pleasure of witnessing. Taking a final bow, Solstafir left having won the hearts of everyone in the room.

It was then time for the final band of the night, one that hadn’t set foot on our shores since 2013.  A familiar gloom and eerieness filled the room and silenced punters as the mighty Norwegians graced the stage. I’ve always been a massive fan of Enslaved, especially of their the albums before they stepped into more progressive ground so I was definitely keen to see how the new music translated live. It was a treat. The set began with a track off one of my favourite albums ‘RIITIIR‘, Enslaved gracing the stage elegantly to magnificent lighting, greeting the crowd and getting straight into it. “Roots of the Mountain” couldn’t have been a more perfect start to the set; it is undeniably one of the most brilliant, captivating songs they’ve ever written.  Hakon Vinje‘s clean vocals and the magic he creates on the keys along with Grutle‘s growls proved to be absolutely magical.

The night was made that much more amazing by the fact that Enslaved played a number of songs off their 1994 release ‘Frost‘. With a spine-chilling atmosphere, the band erupted into tracks like “Isoders droning” and “Loke“, which got a rather large moshpit going, all at the mercy of  Grutle Kjellson who in my opinion is one of the greatest black metal vocalists of all time. With every track, his vocals echoed throughout the venue with the mighty Ivar Bjornson and Ave Isdal shredding their way through each track on the guitars. As always Grutle’s on-stage banter was a definite highlight of the night, engaging in a little chat and humour between tracks much to the happiness of the crowd. More gems came our way in the form of the powerful “Ruun“, “Isa” which is another favourite and of course “Storm Son” and “Sacred Horse“, from their most recent album ‘E’. As the night came to an end, Enslaved broke into a fantastic encore with a mad drum solo from their newest member Ivar, and then into two more classics “Allfǫðr Oðinn” and “Jotunblood”. Showing gratitude to their fellow Scandinavia, the band dedicated the last of their performance to their close friends in Solstafir as well as thanking their Australian fans for the support. What can I say, it really was a perfect night of music, massive props to DRW Entertainment who keep delivering the goods.