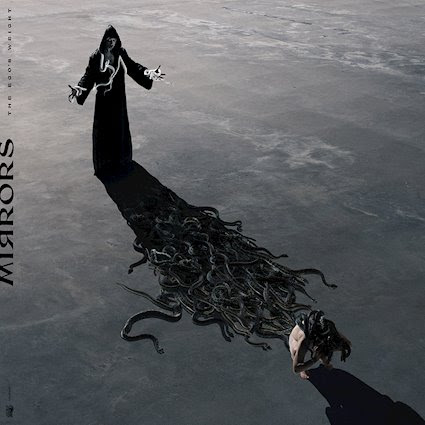 Hypnagogia, the transitional state of consciousness between wakefulness and sleep. That’s what the intro track is called and means. And yes, I had to google that which was a waste of time because by the time I found it, and then copied and pasted it, the 55-second synth noise track was over and Beneath The Sand had kicked off.

Kicked off indeed, heavy indeed. I’m liking where this is going with its heavy groove and broken riffing and the band even pleases me with stepping the pace up a notch with some thrash. But then, as seems to have been the trend for the last 10-20 years, we hear some super clean vocals. Luckily it saves itself by quickly returning to the heaviness of the start of the track. It’s a good track, so I’ll let the pop choruses slide for the moment.

Leave Them Behind is exactly what I’m hoping Mirrors will do with the clean vocals, but my hopes are crushed 43 seconds in as they hit a pulled back verse with clean vocals. They are slightly haunting, though, which makes it a little more bearable. Then the heavy hits, with a slight smidge of the clean vocals, but primarily screamed. A quick bridge then kicks my ass into oblivion. I really like this band when they get down to the heavy business.

Automata brings on the djent after a quick delay bounced guitar intro. This is goddam heavy, let’s hope they keep it that way. It very much reminds me of something by 12 Foot Ninja when the heavy djent grooves kick in and out. To my displeasure, there is a small section of cleans during the bridge of the song, but it quickly gets heavier than it begun.

I’m very displeased to hear a very soft and melodic sung intro to Purple Static, but the bass tone is amazing. The chorus brings the distorted guitars in with some big rung out chords, it’s heavy, in a slow melodic kind of way. We hear the clean vocals again before some heavily detuned guitars start ringing out in the background, and we eventually reach a slow but very effective breakdown.

What We’ll Never See repeats the clean verse formula following a heavy and melodic intro. I will admit, vocalist Patrick Goodman can wail, and when he screams while continuing with the melody, it warms my stone-cold heart a little. I’ve always loved screamers who can hold a note and don’t just scream or yell in a boring monotone fashion (insert Slayer here).

Rebirth starts HEAVY AS FUCK and then trashes out for a bit before chugging the shit out of a well-structured breakdown. We then hear some technical math metal riffing which really made me sit up and take notice. Such a brutal experience for a relatively short 3-minute track.

Is it Hereditary, this whole sing like a The Voice contestant thing? Who knows, but this is how Hereditary plays out again before getting its heavy on mid-track. I wonder what this band would sound like without a vocalist that couldn’t also sing. Probably like some shitty no talent hardcore band. That’s pretty far from the truth though, as this is actually a quite talented bunch of musicians. Talented enough even that I’m willing to overlook the constant use of clean vocals because the contrast it creates works well for them. The Last Page is the third last track, and it’s a pretty basic one, with the most simplistic chord progressions and riffing that I think I’ve heard from the band so far. It’s a slow burner, I’d even call it a heavy ballad. Let’s not fuss over the clean vocals again though because they do eventually please us with a heavy little ditty of an outro.

Looks like I jumped the gun with the whole ballad thing, as For You takes us on a drawn out and very lacklustre adventure into … well, not much at all. Except for a big, long scream in the middle of the song, that was pretty cool. A few more screams towards the end of the song make it a bearable experience.

Closing track Moral Decay follows suit with the previous 2 tracks and starts off feeling like another heavy ballad. It does pick up the pace, and the heavy, as the song gets into full swing. A couple of cycles of this and the track is over in heavy fashion.

This is actually a pretty goddam good album, not if you are one of those old skool elitists, though. If you like your metal a little more modern, you’ll enjoy this, especially if you can look past those annoying pop singalongs which are scattered throughout. I managed to, and I’m sure you can too.