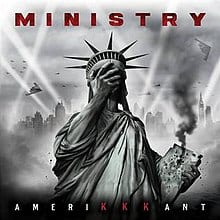 To understand the hype surrounding Ministry’s upcoming release AmeriKKKant, one must understand a couple of things. AmeriKKKant will be the first release since the band’s 2013 album From Beer to Eternity and the first release through label Nuclear Blast Records. This came as somewhat of a welcome shock to Ministry’s massive cult audience after founder, frontman and Industrial pioneer Al Jourgensen stated that the band would be going on an indefinite hiatus following the 2012 death of guitarist Mike Scaccia. But as the current political and socioeconomic climate in America spirals further towards dystopian apocalypse, Jourgensen has reunited and revamped Ministry’s lineup to make a politically fuelled, thrash filled slam piece to let the facist powers that be know exactly how he feels. And let me assure you, Al is fucking pissed off.

“I Know Words” aptly begins the album with a cacophony of low end rumble, effected string sections and heavily manipulated sound bites. It is a clever and not so subtle middle finger to the overly wordy politicians, the media puppets that spread their misinformation and the perfect prelude for what is to come.

“Twilight Zone” follows next in what, I personally feel, is AmeriKKKant’s stand out track. It perfectly summarises everything that this album, and indeed Ministry, have to offer. Crushing, anthemic drum beats that often push the boundaries between stadium rock and garage thrash. Sludgy, chugging guitars that would sound at home coming from some machine in pre industrial England. Bass lines that could be used as an auditory example of the word grinding. Rhythmically arranged vocal samples and turntable scratching that most definitely gave birth to countless Nu-Metal sub genres and of course, Jourgensen’s pounding, angsty vocals that were undoubtedly the voice of multiple generations of pissed of metalheads, punks and goths in years gone by.

“TV 5-4 Chan” breaks up the onslaught with another heavily sampled offering but this time taking aim at America’s far Alt-Right movement. Manipulated sound bites interspersed between blasting, glitchy rhythms point at the resurgence of racist, sexist and biggoted agendas under the current American political regime. As you feel the angst and the outrage that oozes from this track, you can’t help but be inspired to mount your own resistance to whatever oppressive system is relevant to you. To call this track effective would be an understatement.

As socially relevant as the lyrical content of AmeriKKKant is, I can’t help but feel that musically and even sonically, the album isn’t really bringing anything new to the table. I always feel conflicted when writing about pioneers of a genre in what could be misconstrued as a negative light so let me be clear. I personally thoroughly enjoyed the album. It ticked all the boxes on what I look for in a good heavy album. It is well crafted, it is personal, it is opinionated and direct but in saying that, I couldn’t help but feel I’d heard it all before. Granted, it has been on past Ministry releases and other Jourgensen projects that I have encountered similar listening experiences but I am once again left wondering whether being a pioneer of a genre automatically makes you impervious to criticism for lack of evolution? I’ll leave that up to the fans to decide.

Single “Antifa” sums up exactly what i’m talking about. On the surface, the track is everything a Ministry fan has come to expect. Huge riffs, drums that make you wanna bang your head off your neck, gritty sampling and a relevant message screamed in your fucking face, daring you to ignore. But all these positives are also what holds the album back. I couldn’t help but feel more nostalgic listening to this rather than impressed and I feel the mix of the album played a large role in this, specifically the drum mix. Regardless, AmeriKKKant is sure to have something to offer for new and old fans alike (along with a few surprise guest appearances) and will undoubtedly have Australian fans chomping at the bit for a tour announcement after Ministry cancelled their headline shows in mid 2017 with no specific reason cited.

While they may not have made any new ground with AmeriKKKant, the foundation that Ministry put in place over thirty years ago still holds strong proving that, once and for all, they are still the Big Dogs of the Industrial yard. Fans of the genre will assuredly not find themselves disappointed as they sink their teeth into what hopefully won’t be Jourgensen’s final offering.