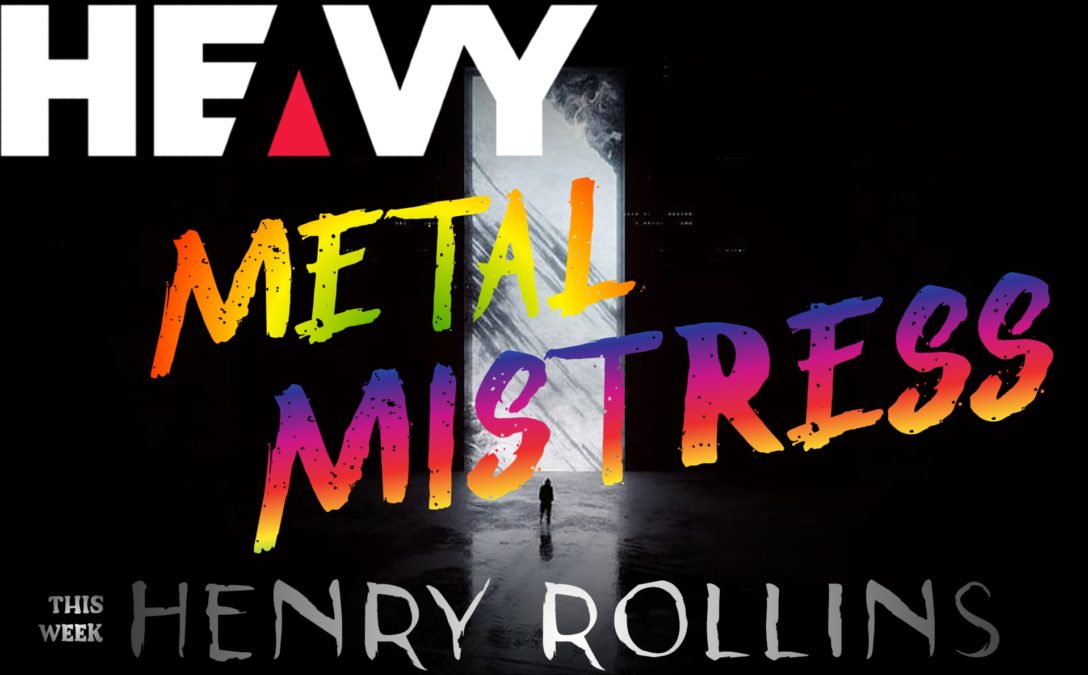 Today’s edition of Metal Mistress focuses on the familiar journey of one Henry Rollins, a man who needs no introduction but will give you one anyway.

Depending on your viewpoint and era, you could easily make an argument for either Black Flag or the Rollins Band being the primary vehicle for the success of Henry Lawrence Garfield, better known as Henry Rollins.

For the sake of timeline, we will adopt the viewpoint that Rollins rose to his current prominence on the back of his role as vocalist for Black Flag, so if you don’t agree, start reading backward from the end of this column and write your own version of events.

Rollins’ love of punk and metal started at an early age, where he was initially into bands like Ted Nugent and Van Halen.

However, his friendship with Ian Mackaye – who later went on to front hardcore punk outfit Minor Threat – led him to punk rock and a search for the edgier side of life and music.

Rollins was quoted as saying, “We wanted something that just kicked ass. Then one of us, probably Ian, got the Sex Pistols record. I remember hearing that and thinking, ‘Well, that’s something. This guy is pissed off, those guitars are rude.’ What a revelation.”

Around 1979 to 1980 Rollins found himself working as a roadie for bands in the DC area, including a hardcore punk outfit by the name of Teen Idles. When the band’s singer Nathan Strejcek failed to show for practice one too many times, Rollins seized his opportunity and badgered the rest of the band into letting have a crack, and thus the musical birth of a legend began.

Rollins quickly earned himself a reputation for his no-bullshit attitude and ferocious stage persona, to the extent that legendary punk outfit Bad Brains occasionally invited the fledgling punk rocker on stage to sing.

After a brief stint fronting State Of Alert, Rollins was given a copy of Black Flag’s Nervous Breakdown EP and became an instant fan, eventually striking up a friendship with bass player Chuck Dukowski. Rollins became a regular at Black Flag shows until, at an impromptu show in New York, Black Flag vocalist Dez Cadeva invited Rollins to sing on Clocked In, which, as it turned out, was like a mini audition for Cadeva’s vocalist position. Cadeva had decided he wanted to play guitar and step down from vocal duties, and Rollins was the man for the job.

In 1981 Rollins officially joined Black Flag, quitting his job, selling his car, and moving to LA.

He soon adopted Rollins as his surname and got the first of his many famous tattoos, the Black Flag logo on his left bicep.

“Black Flag was the sound of starvation, anger, and ambition beyond ambition” he later wrote in his published diary Get In The Van. “We were just trying to survive, not get rich.”

Rollins played his first show with Black Flag on July 25, 1981, at Cuckoos Nest in California and immediately noticed the tension between himself, the band’s fans, and the finer side of society.

With a newfound reputation in a band of societal outcasts, Rollins soon found himself often on the wrong side of the law.

His stage presence was intense beyond anything the world had ever seen before, and before long his personal techniques and mannerisms when preparing for a show made him feared and loved at the same time. A feat true punk warriors only ever dream of achieving.

His on-stage charisma and intensity soon spread to the crowd, who often exercised extreme forces of violence on themselves and often the band.

“I see this dude upfront with a lit cigar,” he recalled at one of the early shows. “Every time I get close, he takes a poke at me while the people on either side of him laugh. I make a note to watch him. However, I forget, because I’m playing hard. The third time, he jams the cigar into my leg. I slap it out of his hand. I look into the crowd. I see three white caps bobbing around. Cops. I keep staring at the white caps to watch what they do. All of a sudden, the caps start to jerk around and then disappear. The kids took the caps from the cops. We stop the music and watch. Kids suddenly were wearing the cops’ clothes and were kicking the shit out of the cops. They killed a police dog. The doors of the hall open and the dog and three guys in their underwear go flying out into the snow. We finish the show, and the crowd yells, ‘Fuck you.’ We yell, ‘Fuck you, too,’ pack the equipment, and depart.”

Another line from his memoirs, Get In The Van, On Tour With Black Flag, – which earned Rollins a Grammy Award for best spoken word album in 1994 – perhaps gives the best insight into the inner rumblings of Rollins’ rebellious mind.

“When they spit at me when they grab at me, they aren’t hurting me,” he wrote. “When I push out and mangle the flesh of another, it’s falling so short of what I really want to do to them.”

As invariably happens with bands, disharmony first appeared in conjunction with legal trouble with the band’s label MCA and before long the fractures began to turn into chasms and the band imploded, often turning on themselves rather than uniting in force.

Despite the band splitting up five years after Rollins joined in 1986, he became Black Flag’s longest-serving vocalist and instilled a fresh sense of purpose and attitude in the band that would stay with them long after he left.

The band released their debut album Damaged in his tenure and made several other notable albums, including the classic In My Heart in 1985.

“I’ll never forget how the depression and loneliness felt good and bad at the same time,” he wrote in his memoirs. “I am ready for whatever is coming. I expect nothing but to be let down or turned away. I am alone. Goddamn, the shit hurts sometimes, but I realise what I am, what I have become.”

Rollins didn’t stay out of the scene for long.

Within 12 months of his exit from Black Flag, Rollins started playing with his long-time friend and guitarist Chris Haskett and bass player Bernie Wandel, collectively releasing two records, Hot Animal Machine and Drive By Shooting. These albums were in a similar vein to Black Flag, except with exaggerated use of heavy metal and funk influences.

Rollins formed the Rollins Band in 1987 and thus began a revolving door of musicians, drafted in depending on Rollins’ mood toward music and desired sound.

The band released their defining album Weight in 1994, which gave Rollins his first taste of musical success on a global scale with the song Liar, and from there the quality of albums only got better. Come In And Burn came out in 1997 before Rollins performed a clean-out of the entire band, replacing the former members with LA rock group Mother Superior, who remained with the band for the next two hard rock-influenced albums Get Some Go Again and Nice.

2001’s Nice was to be the Rollins Band’s last studio album before going on an indefinite hiatus in 2007.

In 2014 Rollins said “I don’t want to play old music. To me, it is fighting battles that are already over and calling yourself a warrior. For me, I see no courage or adventure in doing the old thing over again. If others want to, that’s for them. For myself, I have to move on. Life is too short to live in the past. There is a lot to be done.”

Of course, Rollins isn’t lost entirely to the industry.

Although not performing music at present, he is still taking to the stage with his popular and hilarious spoken word tours, as well as appearing in several television series and films.

The fact he is lost to punk and metal is a shame – bordering on tragedy – but Henry Rollins’ legacy and contribution to the music scene over the last four decades have left an indelible impression that will resonate long after he spits his last word in anger.

And what better way to leave than with the words of the great man himself.

“Half of life is fucking up; the other half is dealing with it.”