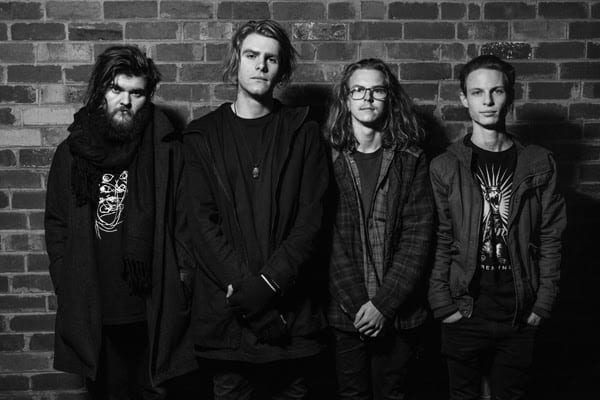 [FROM THE PRESS RELEASE]

Melbourne’s Pridelands are today dropping their new single ‘Coalesce‘ and a film clip to go along with it.

Produced, Mixed & Mastered by Lance Prenc and Jamie Marinos, the track will be available immediately from their bandcamp page.

The track is the first release from the four-piece hardcore outfit since their debut EP, Natives, in 2015. It marks a more refined but focused sound – hard-edged, but full to the brim with emotion and meaning. The film clip matches that with incredible imagery, camera work and effects.

The epic film clip for Coalesce was Directed, Shot and Edited by Kieran Ellis-Jones and features an incredible cast of Joanna Angelidis, Sienna Barrett and Shayana Gaillard. The hard-hitting, amazingly-shot clip features a naked woman in tune with nature traversing a pristine, beautiful forest and a mysterious hooded figure traversing a vandalised, grimy urban environment and the band in an abandoned, broken down warehouse.

The band are doing two shows coming up – this Friday supporting Hellions in Melbourne at the Evelyn Hotel and then in August at the second annual Mini-Fest.

It’s been a huge twelve months for the band – since releasing their debut EP Natives, they have been touring and playing shows with the likes of I Killed the Prom Queen, Make Them Suffer, Saviour, Attila, Buried in Verona, Hellions, Confession, Ocean Grove, Justice for the Damned, Dregg, ’68, Storm The Sky, Void of Vision and more. Never ones to rest, they have also been working on new music, Coalesce being the first taste of what is to come.

Pridelands are: Mason Bunt on Vocals, Liam Fowler on Guitar, Joshua Cory on Bass/Vocals and Jordan McDonald on Drums. The quartet created the band in 2012 and have gathered an army of loyal fans since.